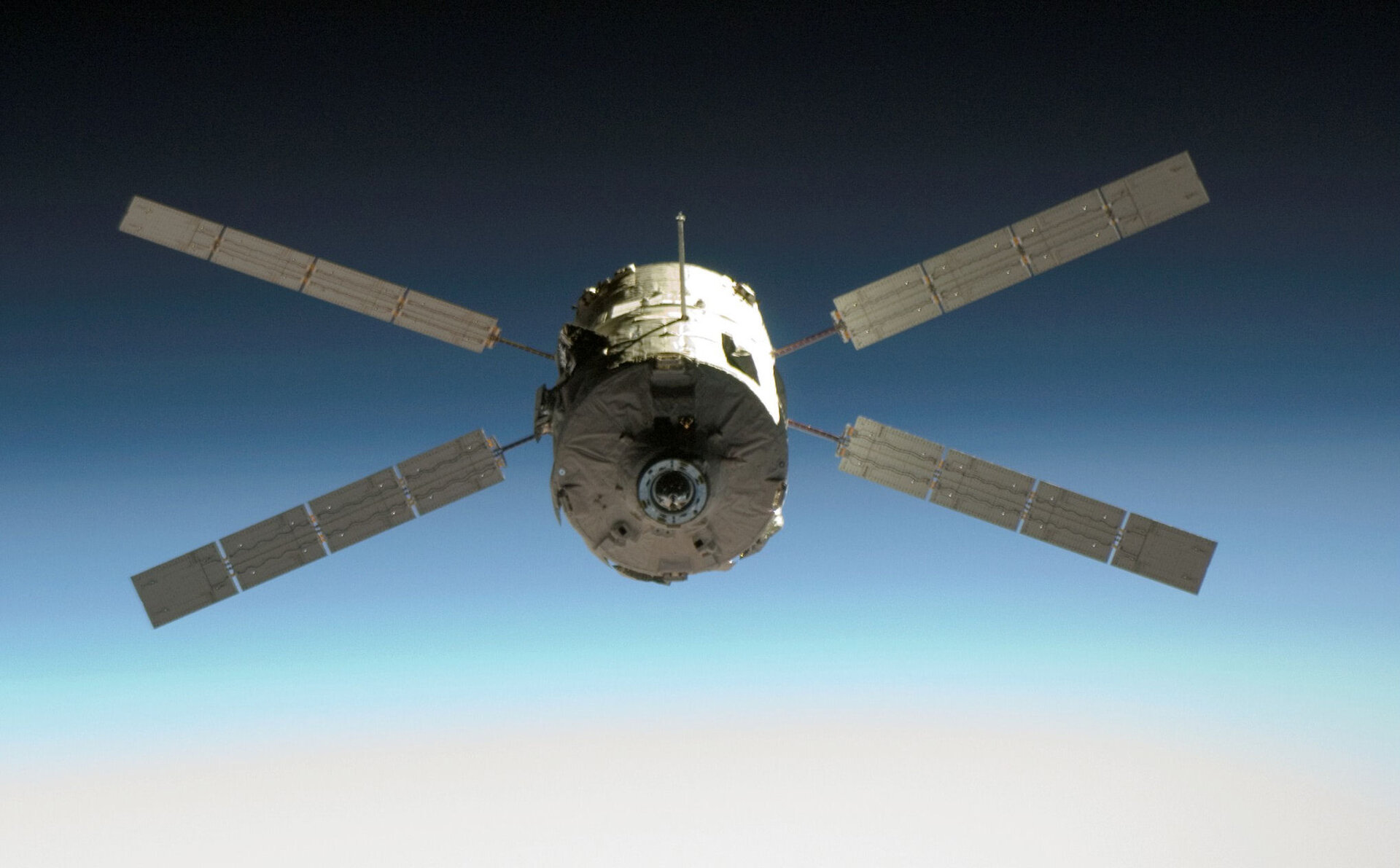 The first ATV was named after the 19th-century French author and visionary Jules Verne, who fascinated millions of young people and inspired space scientists and explorers with his extraordinary stories: From the Earth to the Moon, 20 000 leagues under the sea, and Journey to the Centre of the Earth to name just a few.

The mission of this first ATV was an extraordinary voyage and celestial journey of its own kind. Its task was to demonstrate that ATV could accomplish the cargo flight to the International Space Station safely and reliably, and that all the advanced technologies work as planned. Therefore the mission of Jules Verne was different from the textbook missions that later ATVs used.

ATV-1 was closed in Ariane 5 fairing on 25 February 2008 and placed on the top of the launcher two days later. The launch took place on 9 March at 04:03 CET when the rockets main engine was ignited and solid rocket boosters fired.

Ariane 5 twice used its upper stage engine to fine tune the orbit and release ATV to the trajectory leading towards the International Space Station. Ariane's mission ended 1 hours and 7 minutes after take-off when ATV separated from the upper stage.

After that, ATV was switched on, the propulsion system was primed, solar arrays deployed and GPS system was turned on.

After about 10 days in orbit, ATV positioned itself 2000 km away from Space Station to wait for Suttle mission STS-123 to end. Once the Space Shuttle departed and landed, Jules Verne left its parking orbit and approached the Space Station under the watchfull eye of the ATV Control Centre. Over the following days ATV demonstrated its capability to execute a Collision Avoidance Manoeuvre.

The first demonstration proved that Jules Verne could perform relative navigation with the Space Station, using its relative GPS. ATV moved to the so-called S2 keeping point, located 3.5 km behind the Space Station, at the same orbital altitude. An escape manoeuvre – similar to the Collision Avoidance Manoeuvre – was tested and afterwards ATV return to S2. ATV Control Centre analysed the flight results and gave the go ahead to conduct a second demonstration.

The second Demonstration day tested ATV's close proximity manoeuvring and control, including testing contingency manoeuvres. ATV manoeuvred to within 11 metres of the docking port located on Zvezda, the Russian Service Module on the Station. Finally the crew issued the ESCAPE command and monitored as ATV returned to a safe orbit 19 m behind the Station.

As Jules Verne got closer to actual docking, mission controllers directed the spacecraft in a step-by-step approach. This required authorisation from the Russian Mission Control Centre in Moscow, since ATV docks with Zvezda, a Russian module on the Station.

After a slow and careful approach using a Russian Kurs radar-based system, GPS, the Videometer and Telegoniometer (laser-pulsed instruments that calculate the distance and orientation with the International Space Station), under the watchfull eye of the crew, ATV docked with Zvezda at 16:40 CET on 3 April 2008. The hooks attaching firmly the docking ports together were closed 17:14 CET. ATV was now permanently connected to Zvezda.

Having been part of the Space Station for six months, Jules Verne undocked on 5 September 2008 at 23:29 CET. The ATV then embarked on the last leg of its journey in space, which ended with a controlled destructive reentry into the Earth’s atmosphere on 29 September.

Following a final deorbit burn at 14:58 CET which slowed ATV's velocity by 70 m/s, the spacecraft entered the upper atmosphere at an altitude of 120 km at 15:31 CET. It broke up at an altitude of 75 km with the remaining fragments falling into the Pacific some 12 minutes later.