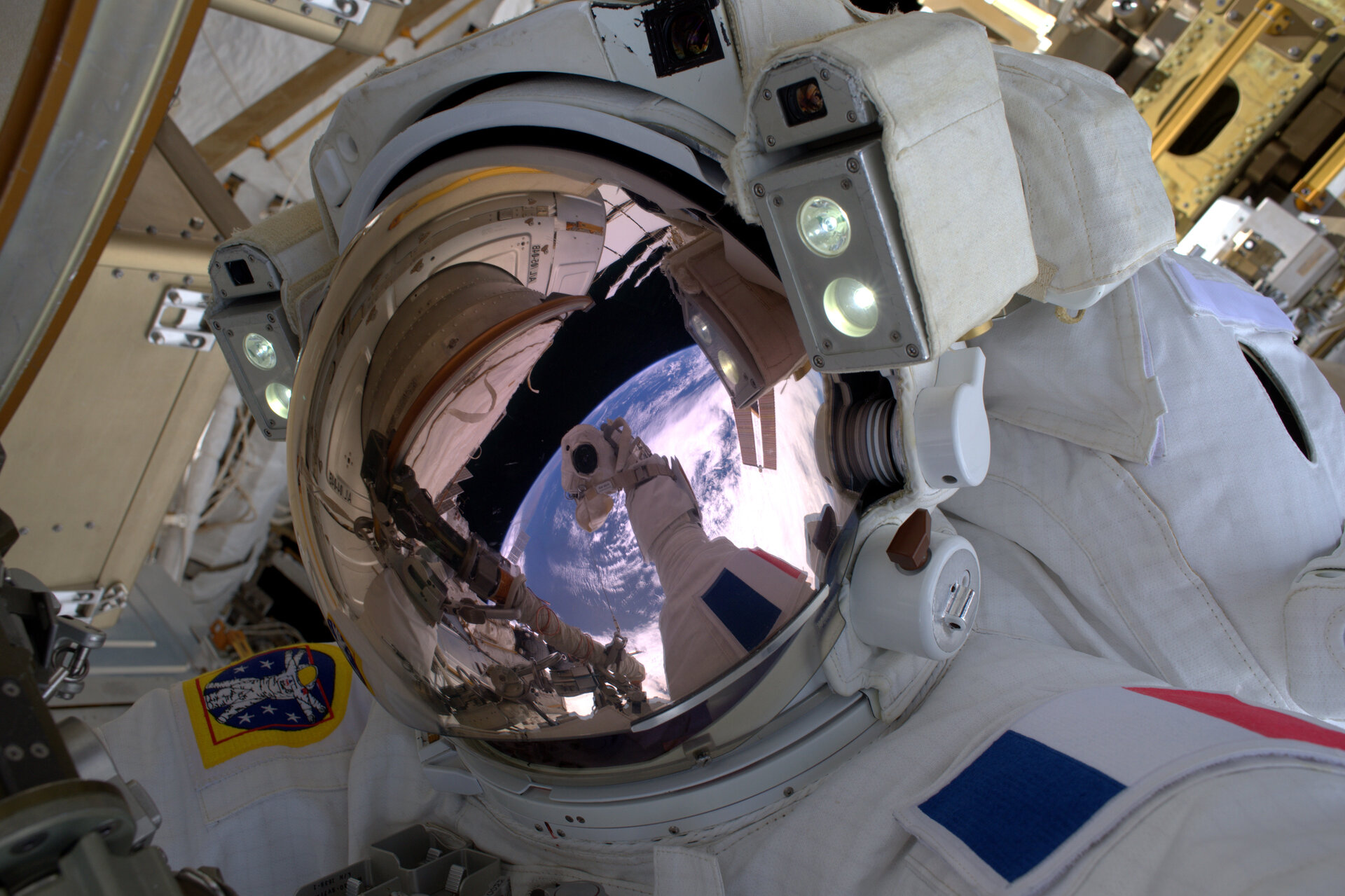 Born in Rouen, France, on 27 February 1978, Thomas Pesquet is a black belt in judo and enjoys basketball, jogging, swimming, squash and outdoor sports such as mountain biking, kite surfing, sailing, skiing and mountaineering. He also has extensive experience in scuba diving and skydiving. His other interests include travelling, playing the saxophone and reading.

Thomas graduated from the competitive French “classes préparatoires aux grandes écoles” at the Lycée Pierre Corneille in Rouen, France, in 1998.

In 2001, he received a master’s degree from the École Nationale Supérieure de l’Aéronautique et de l’Espace in Toulouse, France, majoring in spacecraft design and control. He spent his final year before graduation at the École Polytechnique de Montréal, Canada, as an exchange student on the Aeronautics and Space Master course.

Thomas graduated from the Air France flight school in 2006. This led to an Air Transport Pilot License-Instrument Rating (ATPL-IR).

From April to September 2001, Thomas was a trainee engineer with Thales Alenia Space in Cannes, France, where he developed a satellite system design tool using concurrent engineering techniques.

From October 2001, he worked as a spacecraft dynamics engineer on remote sensing missions for GMV S.A. in Madrid, Spain.

Between 2002 and 2004, Thomas worked at the French space agency, CNES, as a research engineer on space mission autonomy. He also carried out studies on future European ground segment design and European space technology harmonisation. From late 2002, he was a CNES representative at the Consultative Committee for Space Data Systems, working on cross-support between international space agencies.

An avid private pilot in his spare time, Thomas was selected in 2004 for Air France’s flight training programme. He went on to become a commercial pilot for the airline, where he started flying the Airbus A320 in 2006. Having logged more than 2300 flight hours on commercial airliners, he became a type rating instructor on the A320 and a Crew Resource Management instructor.

Thomas was selected as an ESA astronaut in May 2009. He joined ESA in September 2009 and completed basic training in November 2010. After graduation, he worked as a Eurocom, communicating with astronauts during spaceflights from the mission control centre. He was also in charge of future projects at the European Astronaut Centre, including initiating cooperation with new partners such as China.

To be ready for a space mission, he received further technical and operational training in Europe, Russia and the USA: on the Russian Soyuz spacecraft, on the US and Russian spacesuits, and on Space Station systems. He took part in exploration training courses: living and working underground on ESA’s CAVES training course in 2011, and underwater on NASA’s Seatest-2 mission.

On 17 March 2014, Thomas was assigned to his first long-duration mission on the International Space Station.

Thomas was launched to the International Space Station on 17 November 2016 for his six-month Proxima mission, as a flight engineer for Expeditions 50 and 51.

Thomas was the 10th astronaut from France to head into space after a nine-year gap since ESA astronaut Léopold Eyharts during Expedition 16. His busy mission was the first to see all four cargo vehicles in operation at the time (HTV, Cygnus, Dragon and Progress) travelling to the Space Station. He tracked and captured two of them using the Station's robotic arm.

During his stay in space, he took part in over 50 experiments and the six crew members set a record for hours of time spent working on science. Other highlights of his mission included two spacewalks to maintain the Station: one to replace batteries on an electrical channel, and one to fix a cooling leak and service the robotic arm.

Thomas' second spaceflight was announced on 28 July 2020. He traveled to the International Space Station on the second SpaceX Crew Dragon mission together with JAXA astronaut Akihiko Hoshide and NASA astronauts Shane Kimbrough and pilot Megan McArthur. The mission was called Alpha, after Alpha Centauri, the closest stellar system to Earth, following the French tradition to name space missions after stars or constellations. Thomas was the first European to fly to the Space Station in a Crew Dragon, and the first European to fly time from USA in over a decade.

In addition to supporting 200 investigations in space, including 40 European ones and 12 new experiments led by the French space agency CNES, Thomas saw seven spacecraft come and go, the 20-year old Pirs module leaving for good and the arrival of the Russian Nauka laboratory module with a very special passenger, the European Robotic Arm.

Shortly before the end of his mission, on 4 October 2022, Thomas became the fourth European and first French in command of the International Space Station.

The Crew Dragon Endeavour transporting Crew-2 autonomously undocked from the International Space Station and after a series of burns to take pictures of the Space Station's exterior, the spacecraft entered Earth’s atmosphere and deployed parachutes for a soft water-landing, splashing down off the coast of Florida, USA on 9 November 2021 at 03:33 GMT (04:33 CET).

After debriefings and science data collection, Thomas will return to active duty in the ESA astronaut corps. To maintain his operational skills, Thomas flies the Airbus A310 parabolic aircraft for space agencies to run experiments in weightlessness.