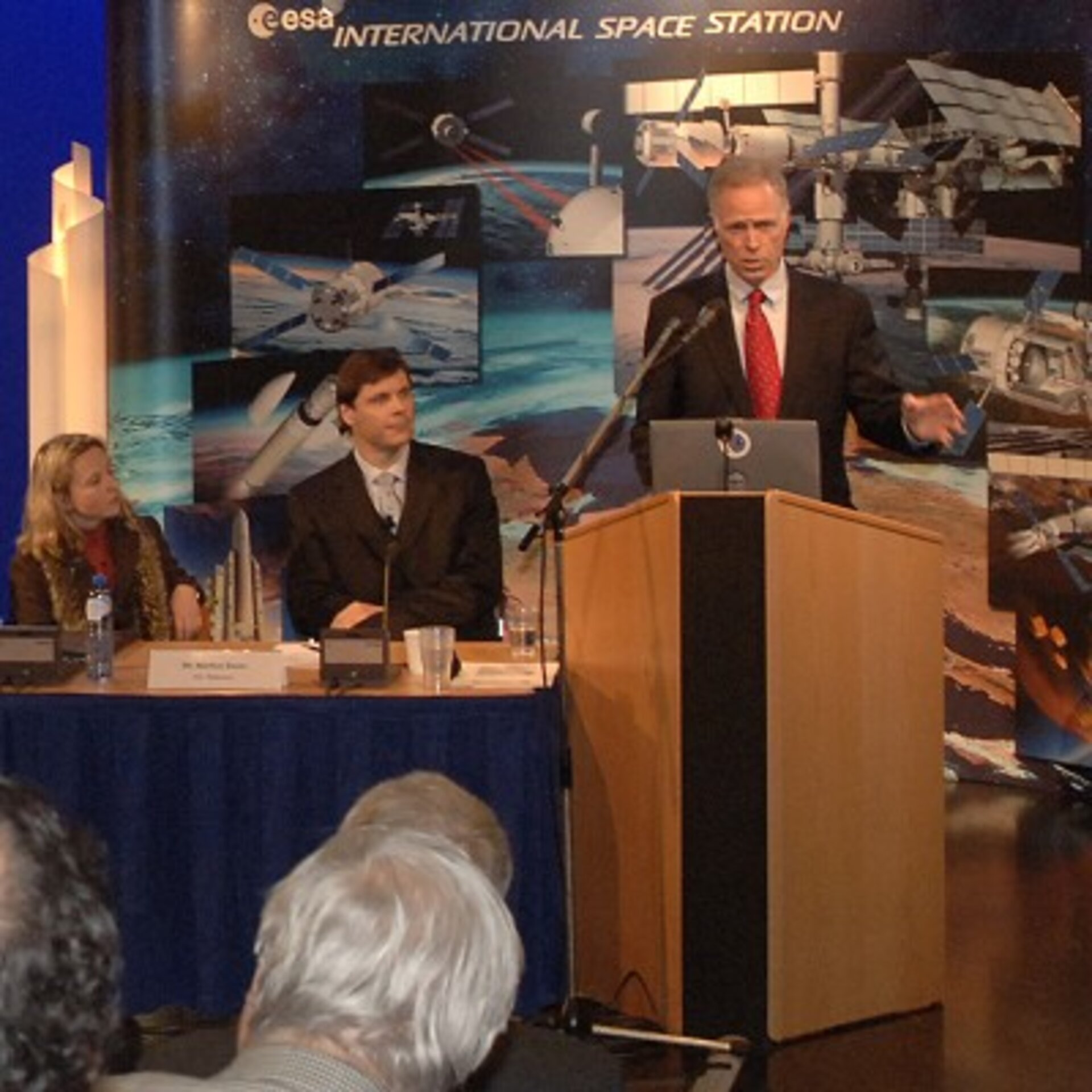 "When you enter space with the Soyuz and you see the blue sphere receding... you just think... wow!... yes, this is really very impressive!" This is how American Gregory Olsen described his most memorable experience in space to the members of the European ISS Business Club (IBC) at its networking meeting at ESTEC in November 2005.

Keynote speaker Olsen made his first public appearance after his ISS mission, which took place only the month before, at this outstanding IBC event. An audience of 80, amongst them representatives of IBC members and high-ranking representatives from space industry, ESA and other agencies, was enthralled by Olsen’s speech themed "Science and Technology – An Easy Way Up". Olsen is not merely a space traveller. Founder of EPITAXX, Inc., and Sensors Unlimited, Inc., he is a successful entrepreneur and striving technology researcher, eager to push boundaries and to go beyond the expected.

It was this sense of adventure that drove him to climb aboard a Soyuz launcher last October to be one of the only three civilians ever to book a private stay on the International Space Station. Olsen followed the line of high-profile guest speakers from the European Commission, NASA, ESA and space industry that the IBC presented at previous meetings.

Through these successful events, the IBC has established a networking platform that attracts decision-makers from many different areas of human spaceflight. The European ISS Business Club is ESA’s industry club for system integrators, service and product providers to the European elements of the ISS.

It was founded by ESA to foster and promote the outstanding achievements of the European companies contributing to the ISS. An exclusive international communication platform, the IBC offers numerous opportunities for establishing business contacts through networking and exchanging ideas with public and private sector decision-makers. It also provides a range of marketing services to add value to strategic corporate communications.

The European ISS Business Club does not consist only of space firms. Its make-up is much more diverse: members belong to market sectors such as fine mechanics, software engineering, cabling, modelling and business consulting. "In the two years of its existence, ESA's industry club has succeeded in establishing a highly exclusive networking platform for human spaceflight.

We are glad that this is being appreciated by our membership as well as by other stakeholders from the space community”, says Anthia Reckziegel, representative of the IBC. In 2005, the IBC managed to integrate new companies from all over Europe into its membership, including EADS Space Transportation GmbH, one of the largest space system integrators in the world.

The newest recruit is UK-based consulting company PCubed, which focuses on global programme management services and solutions. ”For us, the IBC is an ideal forum to stimulate innovative partnerships with some of the most out-standing space companies in Europe,” explains PCubed representative Ky Nichol.

“Space industry is a most forward-looking, intricate business, the ISS being its most visible and fascinating asset. Thus, the European ISS Business Club brand stands for the highest quality standards and cutting-edge technology built on the excellent achievements of ESA and its industrial partners. This is something we feel privileged to be part of.”

The IBC’s goal for the future is to broaden its contacts. “Our objective for 2006 is to establish a dialogue with other industries – such as the automotive industry – in order to present to them the capacity of our members and to define joint interests”, explains Reckziegel. “Activities like these are interesting for the majority of our members, who operate in several markets besides space."