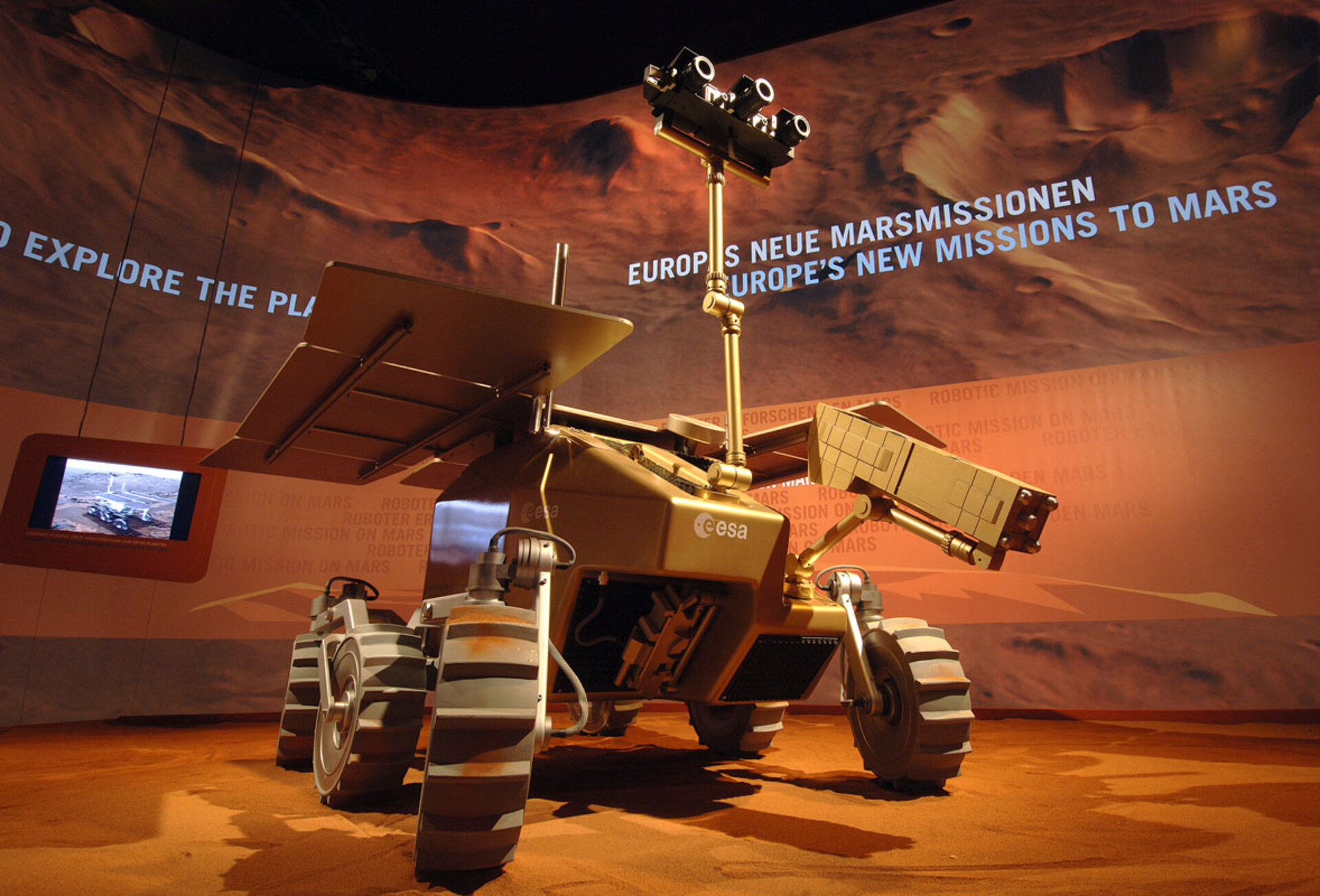 One of the attractions at the ILA2006 Space Pavilion is the full-scale ExoMars rover mock-up based on an artist's impression of Europe’s next mission to Mars and the first robotic mission with the European Space Exploration Programme Aurora.

The large rover and its deployment on the surface of Mars are probably the most challenging elements of the ExoMars mission, currently slated for launch in 2011, which will search for traces of life on and underneath the surface of Mars. The rover will carry a payload, dubbed Pasteur, and will be equipped with a drilling system that will reach up to two metres below the Martian surface.

Through the mock-up and accompanying background animation the many visitors to ILA2006 could gain an appreciation of the different mission phases, the rover surface operations, as well as the rover's expected size.

While an artist's view was used to produce both the rover and its animated graphics, European industry is gearing up to design and manufacture the real thing after having conducted conceptual studies (Phase A) both for the mission and for the rover as one of the mission elements.

The ExoMars mission, under the prime contractorship of Alcatel Alenia Space in Turin, is currently in its preliminary design (B1) phase. The design and manufacturing of major mission elements, such the Carrier, the Descent module and, of course, the Rover will be awarded, in compliance with ESA procurement rules, to European and Canadian companies through devoted Invitation to Tender that will be issued in the coming weeks by the prime contractor, Alcatel Alenia Space.

ExoMars is one of the components of ESA’s Aurora Space Exploration Programme, which is an optional programme under the remit of the Directorate of Human Spaceflight, Microgravity and Exploration. Italy is the country with the largest contribution to the ExoMars mission, among the 14 countries supporting the mission, followed by the Great Britain, France and Germany.

Contract allocation will reflect industrial expertise as well as the level of national contribution - a subject which has fuelled intense discussions among Participating States. No final decision however has been taken with respect to which element will be awarded to whom, even though, given the level of contribution, the available expertise and the consensus among participants, certain decisions can be reasonably anticipated especially at system design and integration level. The design and building of actual hardware is mostly open to competition among industry of all Participating States.

European industry is readying itself for the upcoming challenge to design and build a rover. This activity is a good sign of Europe’s commitment and confidence to be able to land on Mars at the beginning of the next decade and further our knowledge of the Red Planet especially with respect to its biological features.

The final configuration of the ExoMars rover, and of the other elements, remains today, however, still to be defined in particular as far as the contribution of each country and its industries is concerned.

A presentation to interested European and Canadian industry is being organised at ESA's research and technology centre, ESTEC, in Noordwijk, the Netherlands, on 1 June 2006 with the aim of presenting all the available opportunities for industry to be involved in taking Europe on and beneath the surface of Mars.