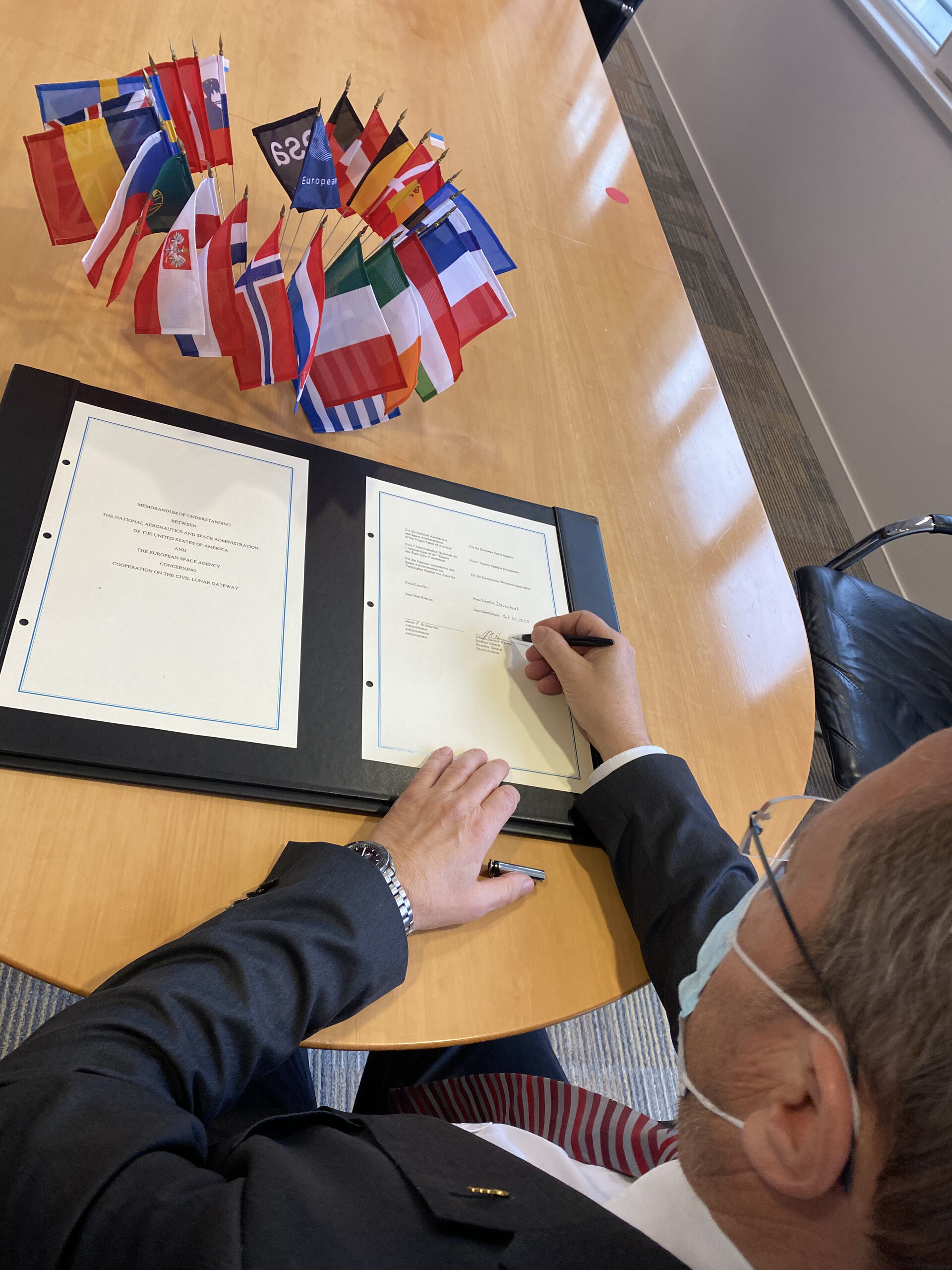 The historic agreement will see ESA Member States contribute a number of essential elements to the first human outpost in lunar orbit, known as the Gateway.

It confirms ESA’s commitment to delivering at least two European Service Modules that provide electricity, water, oxygen and nitrogen to NASA’s Orion spacecraft – with more to come. ESA will fly astronauts to the Gateway as the result of the MoU.

What does the Memorandum of Understanding with NASA concerning Cooperation on the Civil Lunar Gateway mean?

The Memorandum of Understanding, or MOU, that was signed by ESA’s Director General in October 2020, creates a legally binding framework for ESA and NASA to work together to establish the lunar Gateway. It covers the legal commitments and responsibilities of the different partners for the purpose of the Gateway cooperation.

The International Space Station was built after ESA signed similar types of memoranda in 1988 and 1998.

What is the lunar Gateway?

The lunar Gateway is a human outpost around the Moon for space exploration and science that will enable a regular human presence on the Moon. It will be part of NASA’s Artemis lunar exploration programme.

The Memorandum of Understanding has been signed by ESA and NASA.

What is the scope of this Memorandum of Understanding?

The scope of the MoU includes development and operational activities that are needed to build and launch the Lunar Gateway and the European crew.

One of ESA’s contributions towards achieving the Lunar Gateway is the European Service Module, which will provide the new Orion spacecraft that will be used for the Artemis missions to the Moon with power, propulsion, oxygen and water. ESA will receive three flight opportunities for European astronauts to travel to and work on the Gateway.

What is not in the scope of the Memorandum of Understanding?

Operations beyond the lunar Gateway, such as those taking place on the surface of the Moon are not covered by the Memorandum of Understanding. How these activities will take place will be guided by future international agreements among space agencies.

What are the Artemis Accords?

The Artemis Accords are a set of statements, initiated by NASA, to establish common principles, guidelines, and best practices applicable to the entire lunar exploration programme. These accords are signed on a national rather than an organisational level, and on a voluntary basis.

The Artemis Accords contain, reaffirm and develop several principles of space law, in accordance with norms, principles and practices stemming from the Outer Space Treaty of 1967.

The principles set out in these Accords are intended to apply to civil space activities conducted by the civil space agencies of each signatory.

Each signatory commits to taking appropriate steps to ensure that entities (also private operators) acting on its behalf comply with the principles of these Accords.

What kind of principles do the Artemis Accords cover?

The principles of the Artemis Accords are: