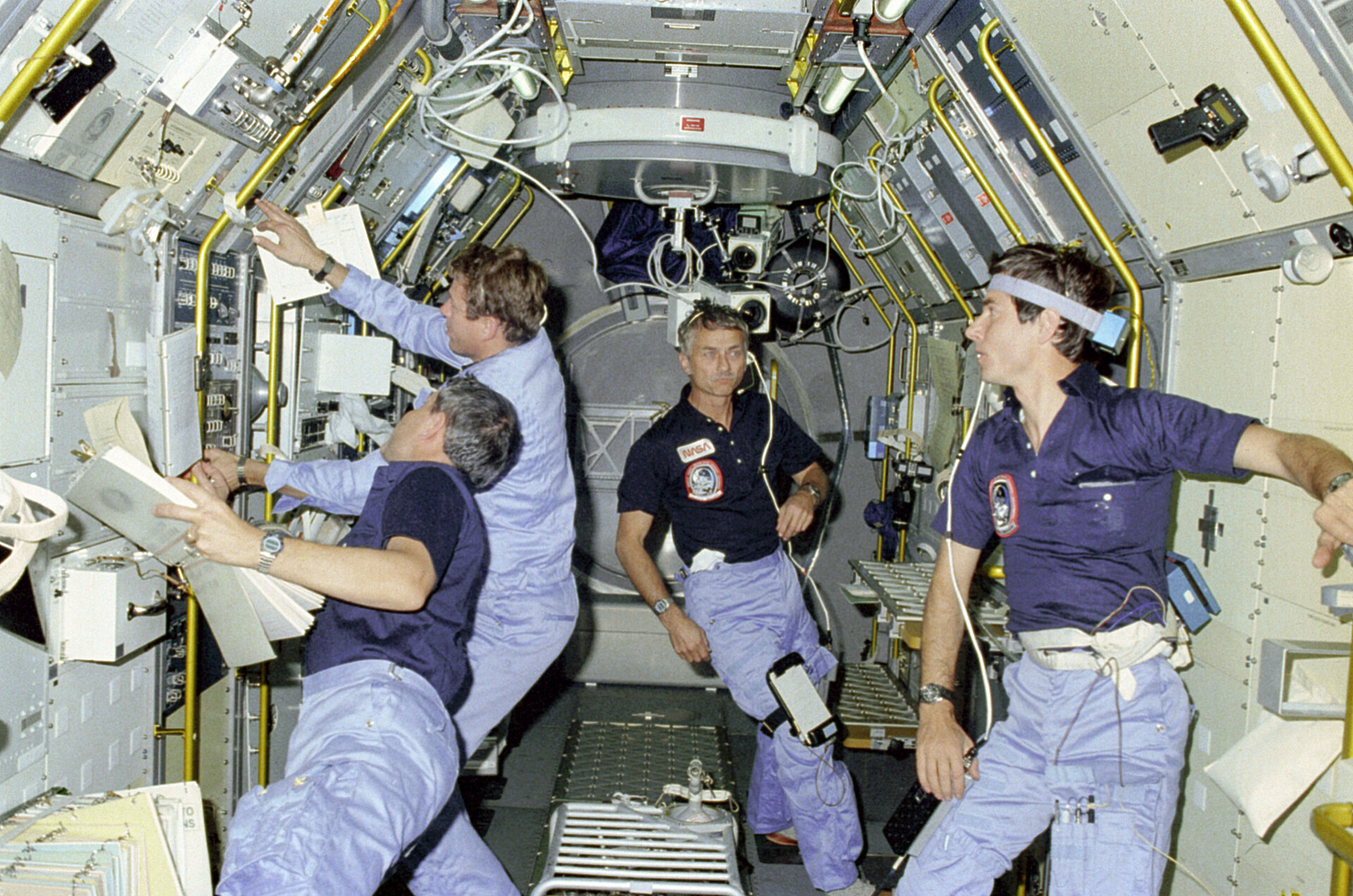 Ulf Merbold’s flight on STS-9 marked the beginning of an extensive ESA/NASA partnership that included dozens of flights of ESA astronauts in the following years.

Spacelab turned out to be one of the most important and most frequently flown Shuttle payload systems to date, with some missions funded and operated by other countries, such as Germany and Japan. When Spacelab flights stopped in 1998, full Spacelab modules had flown 16 times and Spacelab pallet-only missions had flown six times.

With their NASA crewmates, nine Europeans had worked inside Spacelab while in space.

Merbold had been selected in 1978, along with Wubbo Ockels and Claude Nicollier, to train as payload specialists for the first Spacelab flights, but as he recalls, it wasn’t always easy.

“Being the first non-American in the US space programme was really something special. When we started training for Spacelab 1 in Huntsville, we received a warm welcome. During our two years in training, people were really eager and happy to see us. They made sure everything was more than perfect,” says Merbold.

“But in Houston you could feel that not everyone was happy that Europe was involved. Some also resented the new concept of the payload specialist ‘astronaut scientist’, who was not under their control like the pilots. We were perceived to be intruders in an area that was reserved for ‘real’ astronauts.

"A couple of small things made us realise that Johnson Space Center management was suspicious. Now, of course, all this has changed. I think we broke the ice and all our colleagues who came after us had much easier lives.”

Merbold flew on the Spacelab-1 mission as a ‘Payload Specialist’, more like a passenger than a full member of the crew, as was Ockels on Spacelab-D1 two years later.

However, in 1980, under an agreement with ESA, NASA had accepted the inclusion of Nicollier into its own astronaut training class, where he graduated as a ‘Mission Specialist’, meaning a fully fledged member of the crew. His competence later led him to participate in four Shuttle missions, including some of the most ambitious flights ever made: the repair of the Hubble Space Telescope.

German astronaut Ulrich Walter, who flew on Spacelab D2 in 1993, recalls Shuttle training only a few years after Merbold, “I remember it was very hard (we trained for five years including the basic training), but nevertheless it was worthwhile and I would do it again immediately! Yes, I would go again, and not only on a research mission but also any mission to the ISS or wherever.”

“I always appreciated the very good cooperation with the ground teams because they gave everything in order to have their ‘baby’ fly in good shape. The ground teams are always highly motivated people and it was really fun working with them,” remembers Walter.

Today’s astronauts have to train to work on the ISS, which involves modules and systems from each of five partner agencies from USA, Russia, Canada, Japan and ESA.