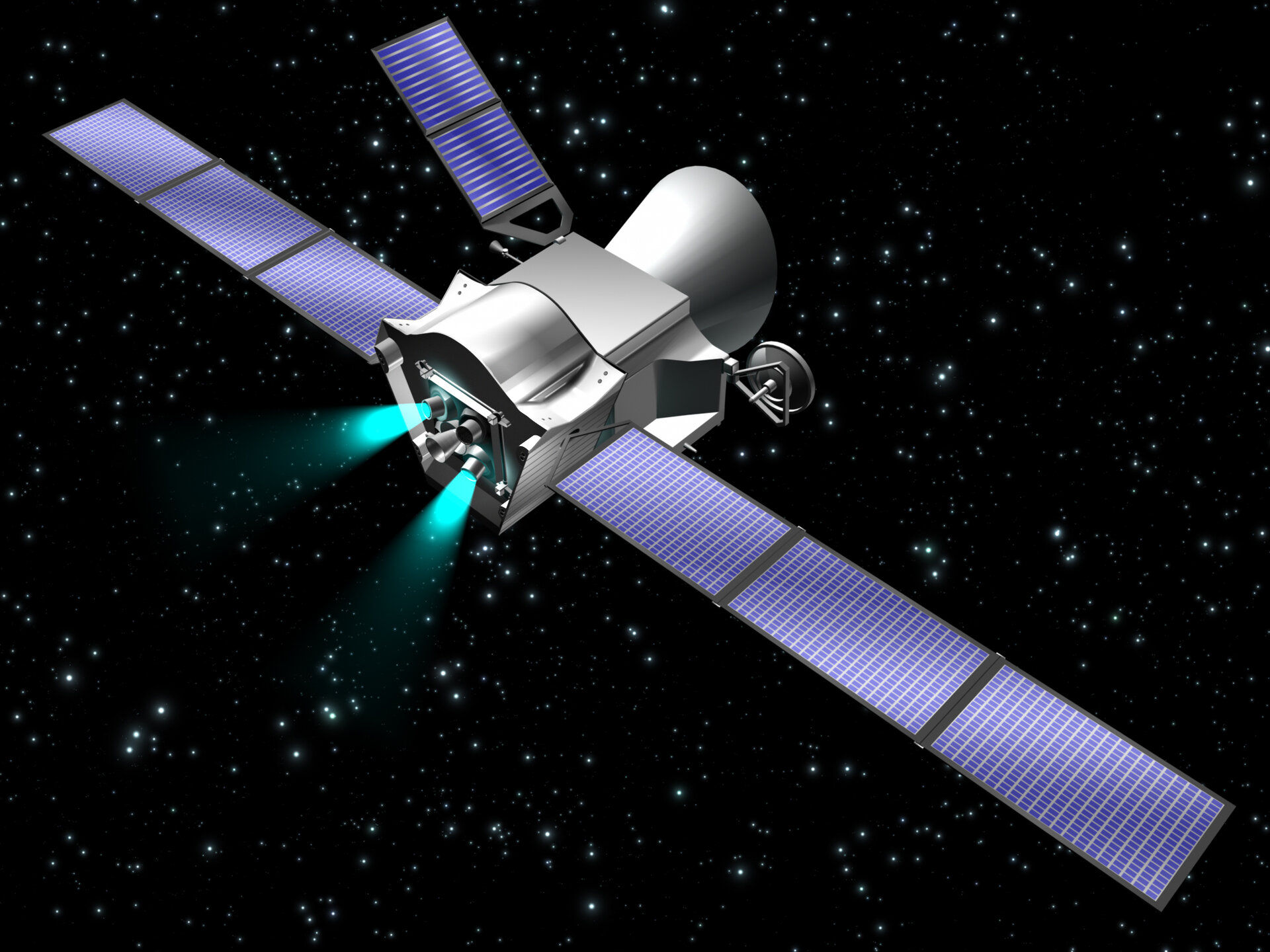 A spacecraft has a number of essential components, such as an engine, power subsystem, steering system and communications system, in addition to science instruments. Most of these systems are housed in a section called the service module, while the science instruments make up the payload module. These are encased inside the spacecraft’s main structural unit and connected by a ‘harness’, the electrical framework on which the spacecraft electronics systems communicate.

The propulsion system that a satellite carries is dictated by the orbital position that it needs to reach and by the type of mission. Additionally to the launch vehicle-provided propulsion, there may be an upper stage (e.g. Fregat) that delivers the spacecraft to a higher or to an escape orbit. The spacecraft itself may carry its own (attached or jettisonable) propulsion module for orbital manoeuvres or orbit adjustment. Finally, smaller thrusters may be  included for fine orbit adjustments and orbit maintenance, the so-called stationkeeping.

‘Cold gas’ propulsion will be used by Gaia and Lisa Pathfinder and is the simplest type of chemical propulsion. The propulsion system consists of pressurized gas and a nozzle, and whenever thrust is needed the nozzle is opened and some of the gas is expelled.

Most satellites also have simple hydrazine thrusters and/or reaction or momentum wheels to control attitude and orbit.

Solar-electric propulsion using ion engines is an alternative way to travel in space. Ion engines shoot out a spray of ionized particles to deliver their thrust to push the spacecraft on its way. Ion engines typically get the high power required to ionize the propellant particles from the spacecraft’s solar panels. They work their magic in a leisurely way and can go on pushing gently for months or even years, for as long as the Sun shines and the small supply of propellant lasts. ESA’s SMART-1 spacecraft used ion propulsion to travel to the Moon in 2003; Bepi-Colombo, launching in 2015, will also use this method combined with gravity assists from flybys of the Earth, Venus and Mercury to finally enter orbit around Mercury.

Studies are also being made in Field-electric propulsion systems (FEEPs), an advanced electrostatic propulsion concept that uses liquid metal and electric fields to create an acceleration

A spacecraft must generate and distribute adequate power to operate its subsystems and instruments. The power generation is usually catered for by solar panels, which convert sunlight into electricity. When the spacecraft is in eclipse, that is in the shadow of a celestial object or turned away from the Sun and the panels thus do not generate power, batteries kick-in. Depending on the type of spacecraft, solar panels may take on a traditional winged shape (for three-axis stabilized satellites) or be wrapped around the cylindrical body of a spinning spacecraft.

Different spacecraft units may require different voltages. Some spacecraft have central units to convert and stabilise the ‘raw’ voltage produced by the solar array before it is distributed, while for others the conversion happens within the units.

A navigation system, usually referred to as ‘Attitude and Orbit Control’ is essential for the spacecraft to maintain its attitude, so that it can be directed towards its intended destination. This capability is also required to keep its solar panels pointed towards the Sun and its instruments pointing at specific targets. Attitude control is achieved with electronic 'eyes' (sun and star sensors).  These can sense the location of the Sun and track the stars allowing the spacecraft’s position and orientation to be calculated. A propulsion system or reaction wheels controlled by appropriate software ensure then that the spacecraft is moved or oriented appropriately.  Most modern spacecraft are ‘three-axis stabilised’ so that they sit 'upright' in space, while other satellites may spin to achieve stability. For example, Planck revolves about a Sun-pointing axis once per minute to stabilise its attitude.

The communications system returns science data, that is passed on to the scientists,  and 'housekeeping' data, called telemetry, which allows engineers back on Earth to monitor the condition of the spacecraft. The on-board communications system also receives all incoming commands. Communications may be carried out at different frequencies using a combination of dishes and high- or low-gain antennaes.

Instructions are received from the ground in the form of individual commands or sequences to be executed at pre-defined times. The commands are processed by the data handling system that either executes them immediately or stores them for later execution.

Science instruments and experiments make up the payload, the number and type of which depends upon the objectives of the mission and the size of the individual payload components. The payload elements and the consortia providing them are selected by means of an open call before the mission is selected. The scientific payload is normally funded by member states via the scientific members of the consortia.

Missions that study the Universe – stars, galaxies, black holes and so on – study objects by collecting the radiation they emit, using telescopes, cameras and detectors.  They usually have a large mirror to collect light from distant astronomical objects. The larger the mirror, the more light it can collect, and the fainter the object it sees. The surface of the mirror has to be precisely shaped and perfectly smooth, since the slightest roughness distorts the final image. Once light from an object, like a star, falls onto the primary mirror, it is directed towards a smaller secondary mirror where the light is focused and directed to the instruments. Here, the light is detected and analysed, and the results recorded by the onboard computer to eventually be relayed back to Earth.

A ‘baffle’ or sunshield surrounds the telescope, limiting the amount of stray light from the Sun, Earth or Moon that can leak onto the detectors and spoil the results. A sunshield also helps radiate excess heat into space, maintaining a stable temperature.

A sophisticated cooling system may also be required; for Herschel and Planck the detectors must be cooled to temperatures close to the coldest temperature reachable in the Universe – absolute zero, or –273.15°C. This is achieved using a cryostat, which typically contains liquid superfluid helium at temperatures lower than -271°C. The role of the cryostat is fundamental because it determines the lifetime of the observatory: the superfluid helium evaporates at a constant rate, gradually emptying the tank.

Spacecraft in orbit around a planet host a wide range of instruments to record information about the planet’s atmosphere, surface, and even subsurface. The payload may include cameras to take images; spectrometers to determine the chemical composition of planet’s surface and atmosphere; radar to probe the subsurface, and instruments to study the way in which the planet interacts with the Sun’s magnetic field.

The payload may also include a lander, such as Cassini’s Huygens lander that touched down on Saturn’s moon Titan in 2005, and Rosetta’s lander Philae, which will probe the surface of Comet 67P/Churyumov-Gerasimenko in 2014 by scooping up samples of the surface and analysing them in its on board science laboratory.

Other missions may include a rover to explore a wider range of a planet’s surface; penetrators to probe the subsurface of a planet or moon to detect ‘earthquakes’; or they may have a sample return element, which must be capable of returning back to Earth with samples collected from the target.

Missions like Lisa Pathfinder will validate in flight a completely new and previously untested method of observing the Universe. Lisa Pathfinder is tasked with testing technology that will lead to the detection of gravity waves, which are thought to be generated by massive objects like black holes. The mission consists of placing two test-masses in a nearly perfect gravitational free-fall, and of controlling and measuring their motion with unprecedented accuracy. This is achieved through state-of-the-art technology comprising inertial sensors, a laser metrology system, a drag-free control system and an ultra-precise micro-propulsion system.