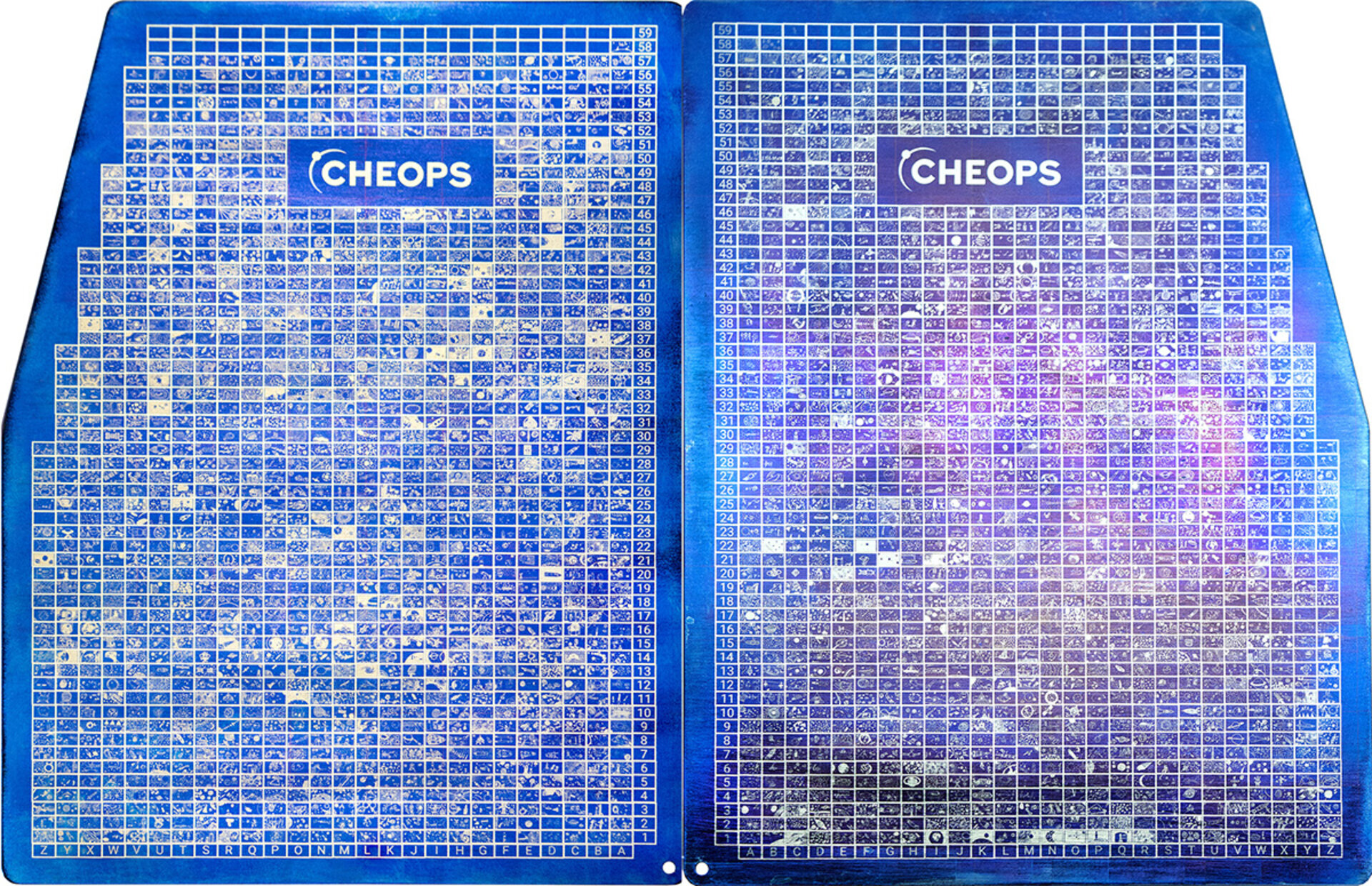 Two plaques etched with thousands of miniaturised drawings made by children have been unveiled in a dedicated ceremony held today in Switzerland.

Three years ago, thousands of children were inspired by the study of planets beyond our Solar System and translated their imagination into beautiful drawings, which feature a variety of planets and other cosmic settings. Out of the many excellent entries, over 2700 were selected to fly on ESA’s Characterising Exoplanet Satellite, Cheops.

Cheops will make high-precision measurements of stars, monitoring the small changes in brightness due to the transit of a planet across the star's disc, in order to determine the planet’s size. Combined with known information about the planet’s mass, Cheops will enable the density of the planet to be calculated, and as such determine if it is a rocky, icy, or even a water-world for example – a first step to characterise exoplanets.

“Cheops is ESA’s first small-class science mission and its task is big. The first step characterisation of the Earth-to-Neptune size planets that Cheops will target is an essential step to piecing together what these planets are made of, and towards the long-term search for habitable worlds beyond our own Solar System,”says Jan Wörner, ESA Director General.

“This unique satellite, the product of European collaboration, has already inspired the young generation, seen in the drawings engraved on the plaques unveiled today as Cheops begins its final stages of preparations before moving to the launch site.”

While the satellite was being assembled earlier this year, a team at the Bern University of Applied Sciences in Burgdorf, Switzerland miniaturized the drawings and engraved them onto two titanium plates. Each plaque measures nearly 18 cm across and 24 cm high.

The spacecraft has recently completed a series of tests at RUAG Space in Zurich, Switzerland, and today was presented to media and invited guests with the two plaques now attached.

Cheops will soon travel to ESA’s technical centre in the Netherlands where the satellite will undergo acoustic and radio-frequency compatibility tests during September, concluding the environmental test campaign. The spacecraft will then return to Airbus Defence and Space, Spain for final tests before shipment to Europe’s Spaceport in Kourou, French Guiana.

The satellite, which is implemented as a partnership between ESA and Switzerland, is on track to complete all planned test activities by the end of the year.

Once in Earth orbit Cheops will begin to characterise some of the many extrasolar worlds already discovered, many of which are similar to those depicted in the inspired artwork that will fly into space with this exciting mission.