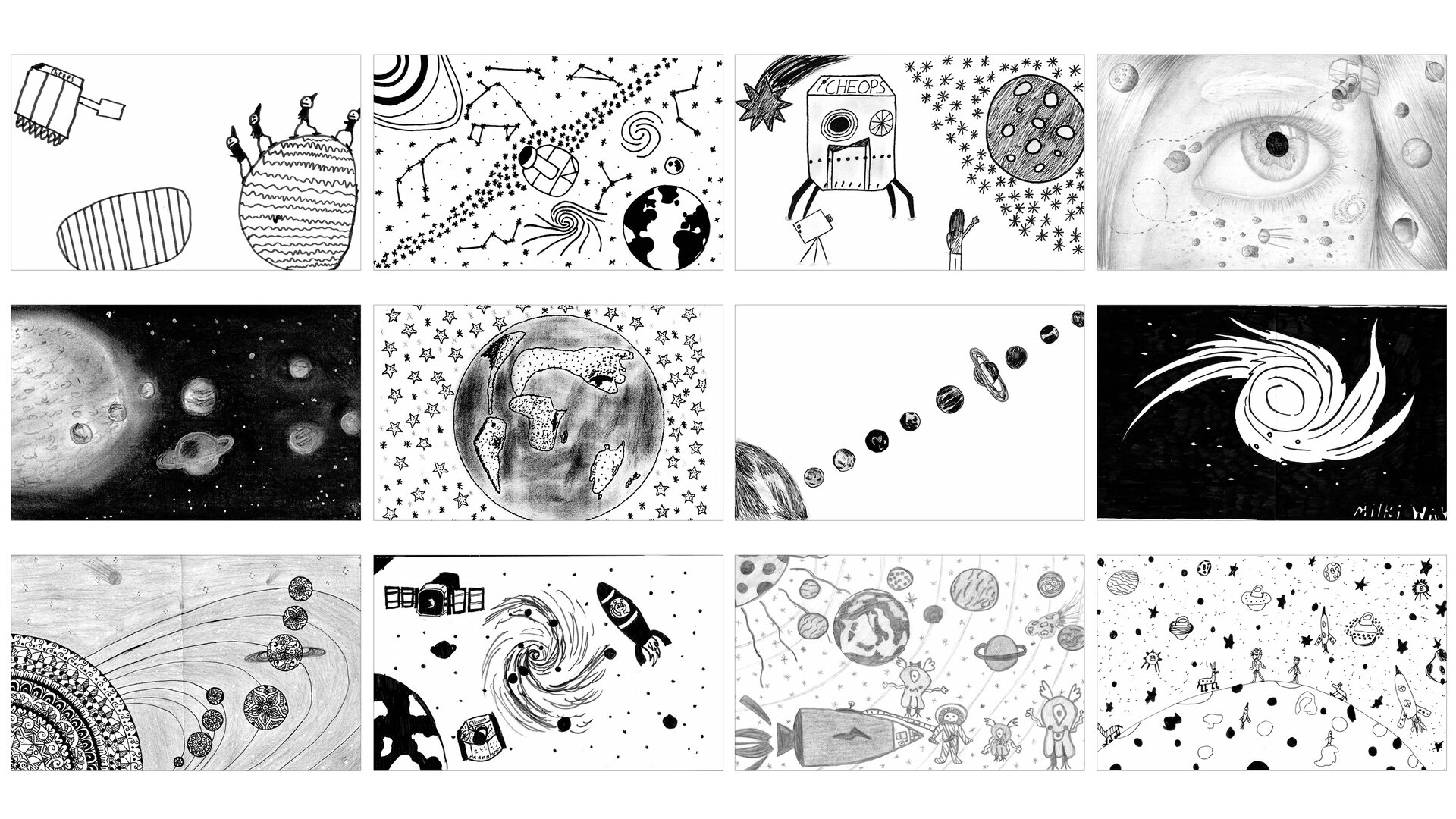 Thousands of children across Europe have taken part in a competition to submit drawings that will be miniaturised and sent into space onboard ESA’s Cheops astronomy satellite.

Out of the many excellent entries featuring a variety of cosmic settings, a total of 3000 were selected. These will now be scanned and shrunk by a factor of 1000 to be engraved on two metal plaques that will be attached to the satellite.

Cheops is a small space telescope dedicated to observing nearby stars that are already known to have planets. Through very precise measurements of the slight dimming of the stars as the planets pass in front of them, astronomers will be able to determine the sizes of the planets and learn more about how planetary systems form.

The satellite is being built as a collaboration between ESA and a consortium of European countries led by Switzerland.

The competition was coordinated by the University of Bern, Switzerland, the lead institution, and run in collaboration with ESA and mission partner institutions in the Cheops countries: Austria, Belgium, France, Germany, Hungary, Italy, Portugal, Spain, Sweden, Switzerland and the UK.

The competition ran between May and October 2015 and was aimed at children between the ages of 8 and 14 from ESA member and cooperating states. Around 1700 drawings were sent directly to ESA, while the partner institutions across Europe received thousands more.

The drawings spanned a wide range of subjects, from accurate representations of Earth, other Solar System planets, starry skies and astronauts, to imaginative illustrations of stars and extrasolar worlds, featuring space explorers of the future, human and alien alike. There were not only realistic renditions of Cheops and other space missions and rockets, but also highly abstract visualisations of space.

The competition required the artwork to be drawn in black-and-white to facilitate the engraving process on the plaques, but the participants employed many different techniques and approaches.

“We were astonished at the popularity of the competition,” says Kate Isaak, ESA Cheops project scientist.

“Thousands of children have shared with us not only their passion and interest for space, but also what Cheops means to them, rendered with great creativity and ingenuity.”

As the number of drawings submitted was far greater than can be accommodated on the two plaques, a lottery was organised to select the 3000 winning entries that will be eventually flown into space.

A showcase of the winning entries can be viewed online.

“We wanted the children to share the excitement about living at a special moment in time, when technology and science come together to allow the discovery of new worlds and possibly life beyond our Earth,” says Willy Benz, Cheops principal investigator at the University of Bern.

“What could be better than a drawing to unleash their imagination?”

Over the next months, a team from the Department of Engineering and Information Technology at the Bern University of Applied Sciences in Burgdorf, Switzerland, will miniaturise the drawings and engrave them on the metal plaques.

Following all of these tests, the integration of the flight platform will start in the summer, with the actual satellite with its telescope and instrument planned to be ready for launch by early 2018.

ESA has started the launch procurement process, which is expected to be finalised before the end of this year.

“We’d like to thank all the participants who joined us in this exciting Cheops activity,” concludes Kate.

Notes for Editors
About Cheops