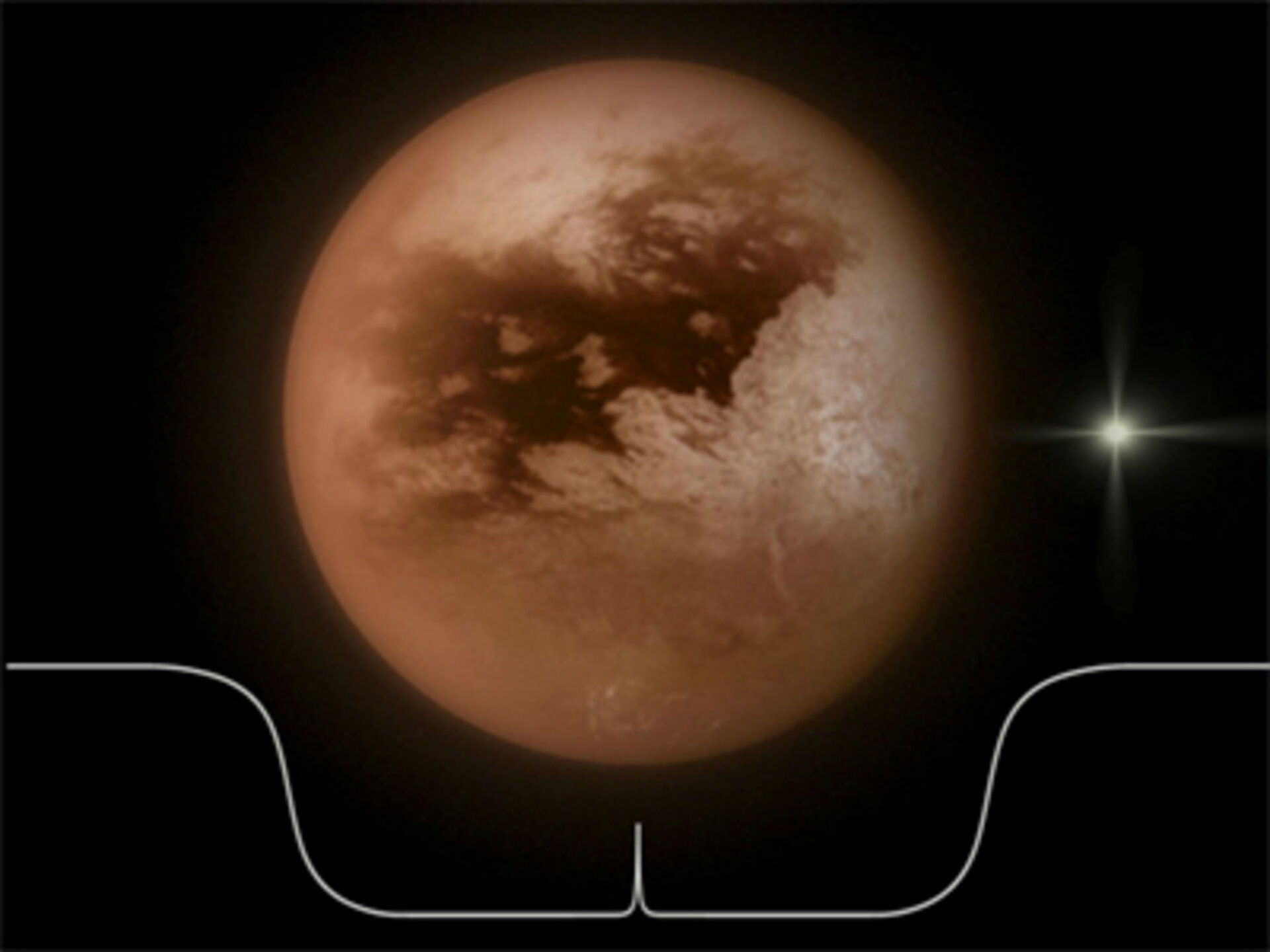 A pair of rare celestial alignments that occurred in November 2003 helped an international team of astronomers investigate the far-off world of Titan. In particular, the alignments helped validate the atmospheric model used to design the entry trajectory for ESA's Huygens probe.

Now the unique results are helping to place the descent of Huygens in a global context, and to investigate the upper layers of Titan’s atmosphere.

Occasionally Titan passes directly in front of a distant star. When it does so, the light from the star is blocked out. Because Titan has a thick atmosphere, the light does not 'turn off' straight away. Instead, it drops gradually as the blankets of atmosphere slide in front of the star. The way the light drops tells astronomers about the atmosphere of Titan.

By pure chance on 14 November 2003, fourteen months before Huygens’ historic descent through Titan's atmosphere, Titan passed in front of two stars, just seven and a half hours apart. Bruno Sicardy, Observatoire de Paris, France, organised expeditions to record the occultations, as such events are called.

The first occultation was visible just after midnight from the Indian Ocean and the southern half of Africa. The second could be seen from Western Europe, the Atlantic Ocean, Northern and Central Americas. Teams of astronomers set up along the occultation tracks.

Sicardy was looking for one observation in particular. "Titan's atmosphere acts like a lens, so at the very middle of the occultation, a bright flash occurs," explains Sicardy. If Titan's atmosphere were a perfectly uniform layer, the central flash would be a pinprick of light, visible only at the very centre of the planet's shadow. However, comparing the results from many telescopes, Sicardy found that the central flash fell across the Earth in a triangular shape.

"It is like the light falling through a glass of water and making bright patterns on the table. The focused light is not perfectly round because the glass is not a perfect lens," says Sicardy. Analysing the shape of the flash showed that Titan’s atmosphere was flattened at the north pole. This was because at the time of the occultation, Titan's south pole was tilted towards the Sun. This warmed the atmosphere there, causing it to rise and move towards the north of the moon, where the atmosphere cooled and sank towards the surface.

There was one other key discovery that the occultation data allowed Sicardy and his team to make. A fast moving, high altitude wind (above 200 kilometres) was blowing around Titan at latitude of 50 degrees north. They estimated that it was moving at 200 metres per second (or 720 kilometres per hour) and would encircle the planet in less than one terrestrial day.

"It is like the jet stream on Earth," says Sicardy, "Furthermore, we told the Huygens team to expect some bumps near 510 kilometres altitude, due to a narrow and sudden temperature variation."

Indeed, Huygens was jolted by exactly such a layer during its 14 January 2005 entry. "A temperature inversion was indeed detected by the accelerometers during entry at this very altitude" says Jean-Pierre Lebreton, Huygens project scientist.

The work does not stop there. Even though the Huygens descent took place almost two years ago, the understanding of its data continues to provide key insights into Titan.