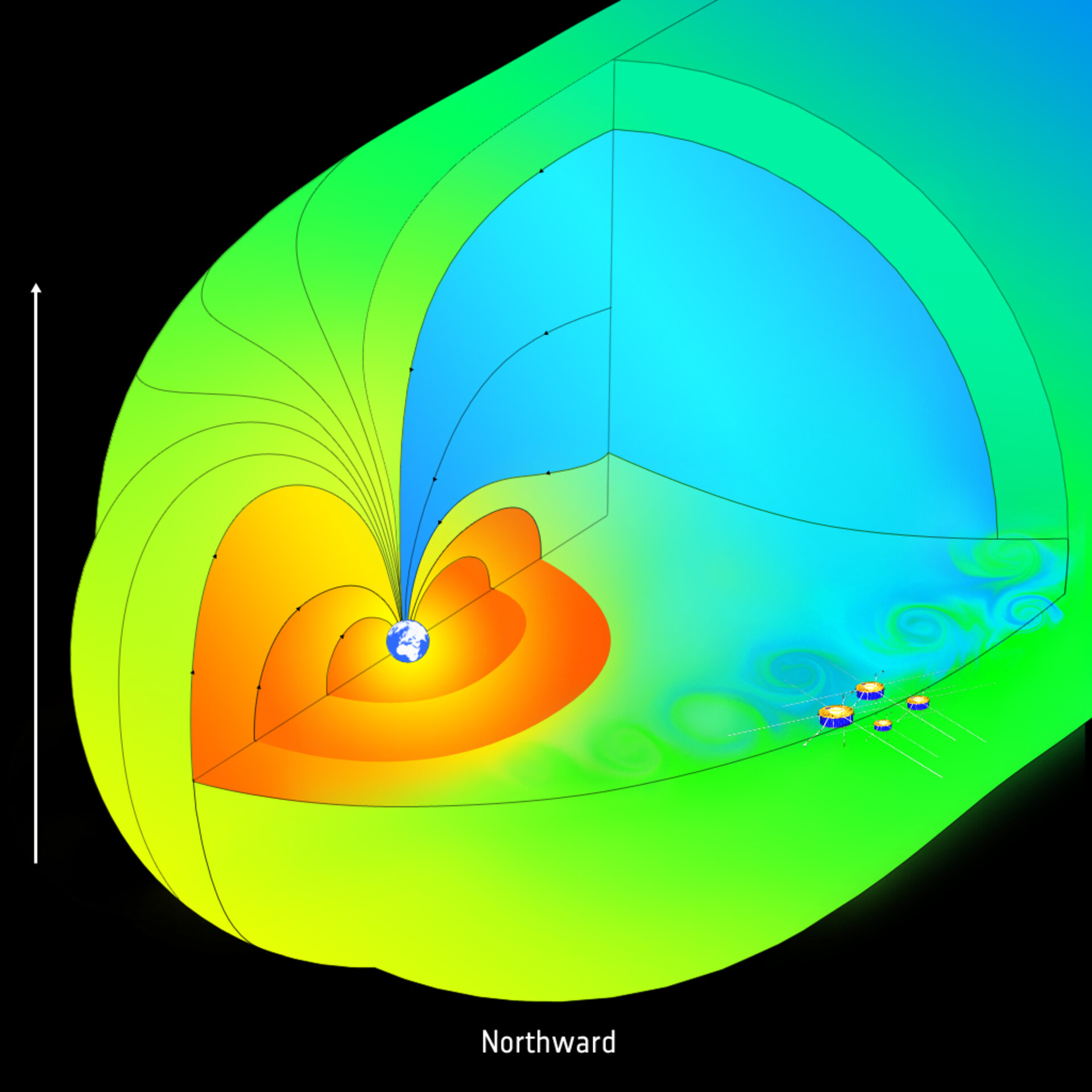 ESA’s quartet of satellites studying Earth’s magnetosphere, Cluster, has discovered that our protective magnetic bubble lets the solar wind in under a wider range of conditions than previously believed.

Earth’s magnetic field is our planet’s first line of defence against the bombardment of the solar wind. This stream of plasma is launched by the Sun and travels across the Solar System, carrying its own magnetic field with it.

Depending on how the solar wind’s interplanetary magnetic field – IMF – is aligned with Earth’s magnetic field, different phenomena can arise in Earth’s immediate environment.

One well-known process is magnetic reconnection, where magnetic field lines pointing in opposite directions spontaneously break and reconnect with other nearby field lines. This redirects their plasma load into the magnetosphere, opening the door to the solar wind and allowing it to reach Earth.

In 2006, Cluster made the surprising discovery that huge, 40 000 km swirls of plasma along the boundary of the magnetosphere – the magnetopause – could allow the solar wind to enter, even when Earth’s magnetic field and the IMF are aligned.

These swirls were found at low, equatorial latitudes, where the magnetic fields were most closely aligned.

These giant vortices are driven by a process known as the Kelvin–Helmholtz (KH) effect, which can occur anywhere in nature when two adjacent flows slip past each other at different speeds.

Examples include waves whipped up by wind sliding across the surface of the ocean, or in atmospheric clouds.

Analysis of Cluster data has now found that KH waves can also occur at a wider range of magnetopause locations and when the IMF is arranged in a number of other configurations, providing a mechanism for the continuous transport of the solar wind into Earth’s magnetosphere.

“We found that when the interplanetary magnetic field is westward or eastward, magnetopause boundary layers at higher latitude become most subject to KH instabilities, regions quite distant from previous observations of these waves,” says Kyoung-Joo Hwang of NASA’s Goddard Space Flight Center and lead author of the paper published in the Journal of Geophysical Research.

“In fact, it’s very hard to imagine a situation where solar wind plasma could not leak into the magnetosphere, since it is not a perfect magnetic bubble.”

The findings confirm theoretical predictions and are reproduced by simulations presented by the authors of the new study.

“The solar wind can enter the magnetosphere at different locations and under different magnetic field conditions that we hadn’t known about before,” says co-author Melvyn Goldstein, also from Goddard Space Flight Center.

“That suggests there is a ‘sieve-like’ property of the magnetopause in allowing the solar wind to continuously flow into the magnetosphere.”

The KH effect is also seen in the magnetospheres of Mercury and Saturn, and the new results suggest that it may provide a possible continuous entry mechanism of solar wind into those planetary magnetospheres, too.

“Cluster’s observations of these boundary waves have provided a great advance on our understanding of solar wind – magnetosphere interactions, which are at the heart of space weather research,” says Matt Taylor, ESA’s Cluster project scientist.

“In this case, the relatively small separation of the four Cluster satellites as they passed through the high-latitude dayside magnetopause provided a microscopic look at the processes ripping open the magnetopause and allowing particles from the Sun direct entry into the atmosphere.”