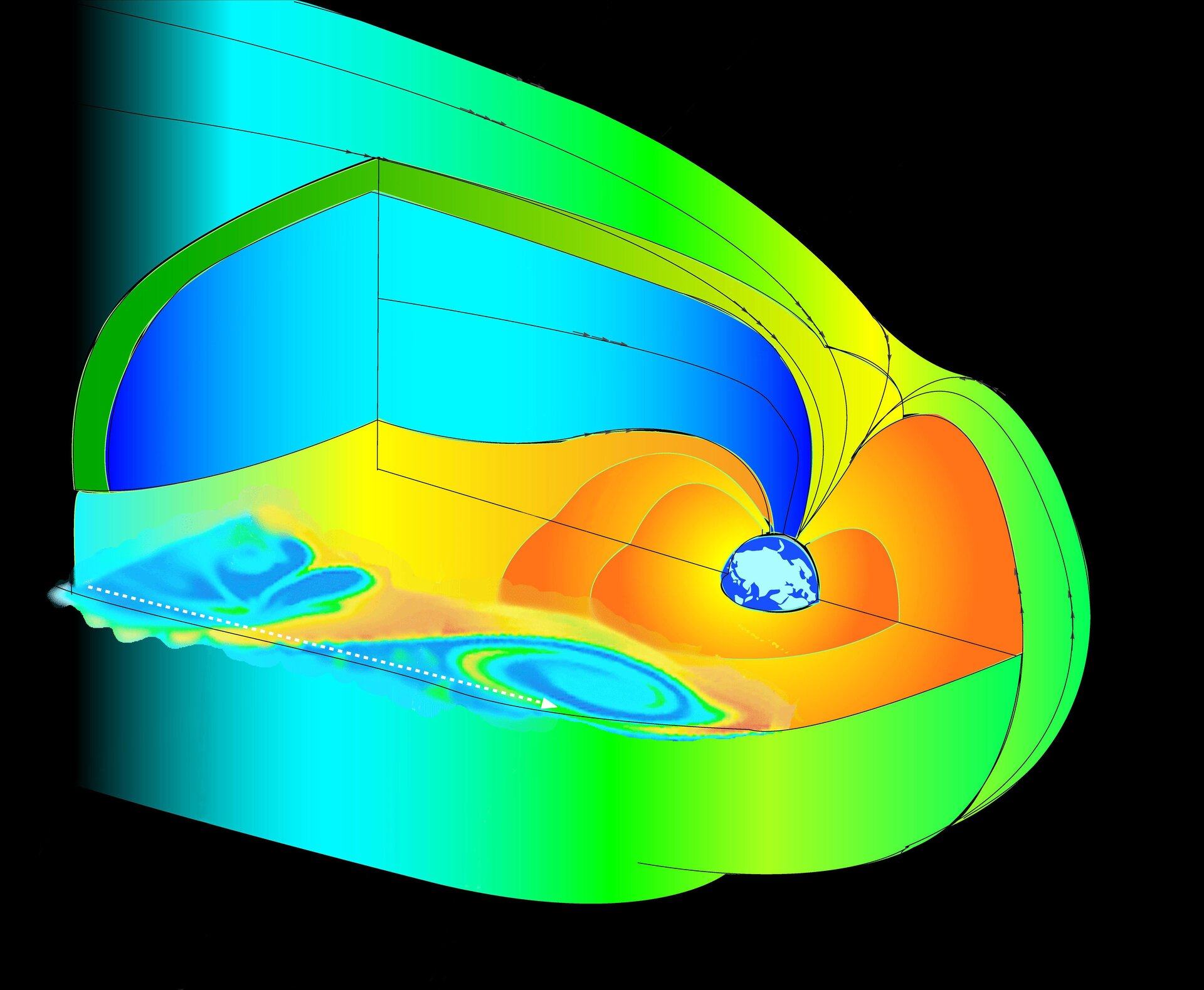 Giant whirlpools of electrically charged gas, some 40 000 kilometres across, have been witnessed above the Earth by a team of European and American scientists. Using data from ESA's Cluster quartet of spacecraft, the researchers have shown that these whirlpools inject electrified gas into the magnetic environment of the Earth.

The magnetic field generated inside the Earth protects the planet from the electrically charged particles given out by the Sun. However, it is only a partially effective shield.

For a particle of plasma to suddenly jump onto a different field line, there has to be a reconnection event. In a reconnection, magnetic fields lines spontaneously break and then join up with other nearby lines. In doing so, the plasma is suddenly redirected along new routes.

For this to happen, the solar wind plasma must somehow be able to cross the Earth’s magnetic boundary, known as the magnetopause. Yet, until now scientists had no observational evidence that reconnection inside whirlpools contribute to this process. "Wondering how the solar wind could get into the plasma sheet is how I became interested in this problem," says Katariina Nykyri, lead author of the results, from the Imperial College, London, UK.

Together with colleagues, Nykyri began investigating a strange event recorded by Cluster on 3 July 2001. At this time, Cluster was passing the dawn side of the Earth. In this region of space, the solar wind is sliding past the Earth's magnetopause, in roughly the same way as wind blows across the surface of an ocean.

A previous Cluster observation had shown that whirlpools of plasma can be whipped up by this configuration. Such whirlpools are known as Kelvin-Helmholtz instabilities and scientists suspected them of being the location of magnetic reconnection but no one had found any conclusive evidence that this was the case.

Then she developed a computer model to simulate the event. The computer showed that the Cluster data was only understandable if the whirlpools were causing magnetic reconnection to take place. In these reconnections, plasma was being fed down through the magnetic boundary of Earth and into the magnetosphere.

The work does not stop there. Nykyri and colleagues are now developing more sophisticated computer simulations to understand the whirlpools’ three-dimensional behaviour. "This is a very big challenge," she says, because of the additional numerical processes involved.

She also plans to search the Cluster data archive for more examples of these events.

"Cluster observations of reconnection due to the Kelvin-Helmholtz instability at the dawn side magnetospheric flank", by K. Nykyri, A. Otto, B. Lavraud, C. Mouikis, L.M. Kistler, A. Balogh, H. Rème, is published in Annales Geophysicae (24, 2619-2643, 2006).

From 8 January 2007, Katariina Nykyri will be based at Embry-Riddle Aeronautical University, Florida.