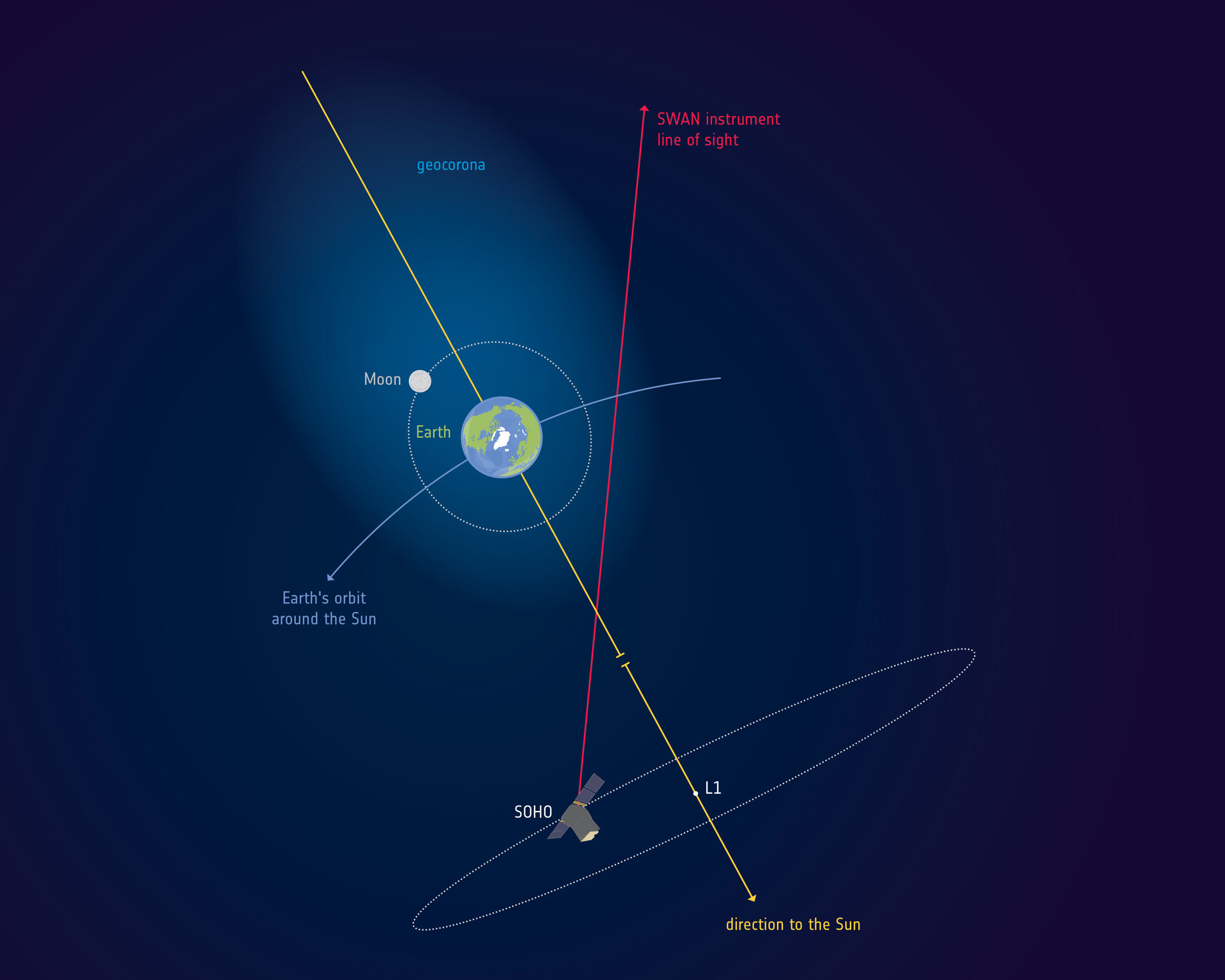 The outermost part of our planet’s atmosphere extends well beyond the lunar orbit – almost twice the distance to the Moon.

A recent discovery based on observations by the ESA/NASA Solar and Heliospheric Observatory, SOHO, shows that the gaseous layer that wraps around Earth reaches up to 630 000 km away, or 50 times the diameter of our planet.

“We were not aware of it until we dusted off observations made over two decades ago by the SOHO spacecraft.”

Where our atmosphere merges into outer space, there is a cloud of hydrogen atoms called the geocorona. One of the spacecraft instruments, SWAN, used its sensitive sensors to trace the hydrogen signature and precisely detect how far the very outskirts of the geocorona are.

These observations could be done only at certain times of the year, when the Earth and its geocorona came into view for SWAN.

For planets with hydrogen in their exospheres, water vapour is often seen closer to their surface. That is the case for Earth, Mars and Venus.

“This is especially interesting when looking for planets with potential reservoirs of water beyond our Solar System,” explains Jean-Loup Bertaux, co-author and former principal investigator of SWAN.

The first telescope on the Moon, placed by Apollo 16 astronauts in 1972, captured an evocative image of the geocorona surrounding Earth and glowing brightly in ultraviolet light.

“At that time, the astronauts on the lunar surface did not know that they were actually embedded in the outskirts of the geocorona,” says Jean-Loup.

The Sun interacts with hydrogen atoms through a particular wavelength of ultraviolet light called Lyman-alpha, which the atoms can both absorb and emit. Since this type of light is absorbed by Earth’s atmosphere, it can only be observed from space.

Thanks to its hydrogen absorption cell, the SWAN instrument could selectively measure the Lyman-alpha light from the geocorona and discard hydrogen atoms further out in interplanetary space.

The new study revealed that sunlight compresses hydrogen atoms in the geocorona on Earth’s dayside, and also produces a region of enhanced density on the night side. The denser dayside region of hydrogen is still rather sparse, with just 70 atoms per cubic centimeter at 60 000 kilometers above Earth’s surface, and about 0.2 atoms at the Moon’s distance.

“On Earth we would call it vacuum, so this extra source of hydrogen is not significant enough to facilitate space exploration,” says Igor.

The good news is that these particles do not pose any threat for space travelers on future crewed missions orbiting the Moon.

“There is also ultraviolet radiation associated to the geocorona, as the hydrogen atoms scatter sunlight in all directions, but the impact on astronauts in lunar orbit would be negligible compared to the main source of radiation – the Sun,” says Jean-Loup Bertaux.

On the down side, the Earth’s geocorona could interfere with future astronomical observations performed in the vicinity of the Moon.

“Space telescopes observing the sky in ultraviolet wavelengths to study the chemical composition of stars and galaxies would need to take this into account,” adds Jean-Loup.

The power of archives

Launched in December 1995, the SOHO space observatory has been studying the Sun, from its deep core to the outer corona and the solar wind, for over two decades. The satellite orbits around the first Lagrange point (L1), some 1.5 million kilometres from Earth towards the Sun.

This location is a good vantage point to observe the geocorona from outside. SOHO’s SWAN instrument imaged Earth and its extended atmosphere on three occasions between 1996 and 1998.

Jean-Loup and Igor’s research team in Russia decided to retrieve this data set from the archives for further analysis. These unique views of the whole geocorona as seen from SOHO are now shedding new light on Earth’s atmosphere.

“Data archived many years ago can often be exploited for new science,” says Bernhard Fleck, ESA SOHO project scientist. “This discovery highlights the value of data collected over 20 years ago and the exceptional performance of SOHO.”

“SWAN/SOHO Lyman-alpha mapping: the Hydrogen Geocorona extends well beyond the Moon” by I. Baliukin et al is accepted in Journal of Geophysical Research: Space Physics.