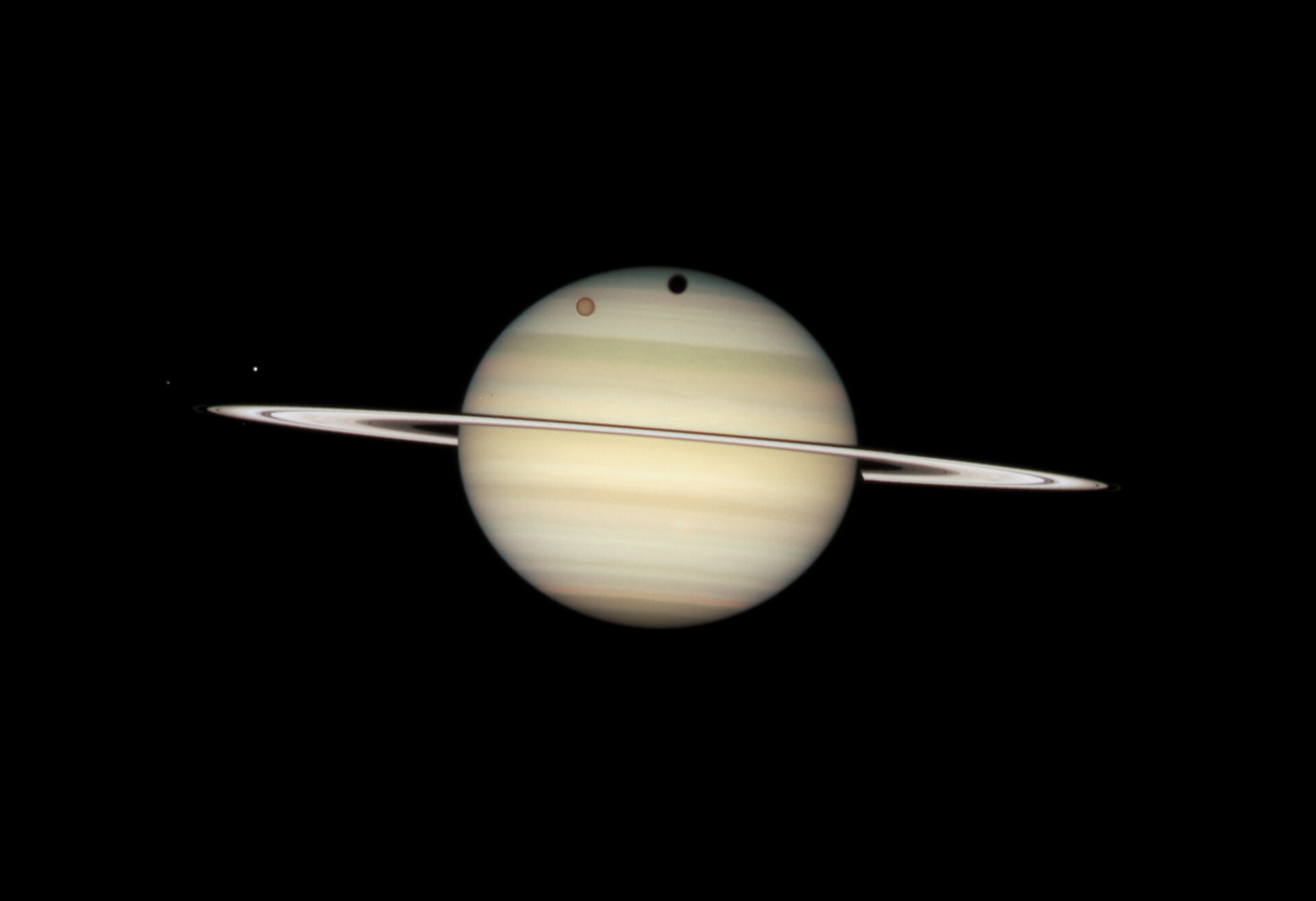 On 24 February 2009, the NASA/ESA Hubble Space Telescope captured a photo sequence of four moons of Saturn passing in front of their parent planet. The moons, from far left to right, are the white icy moons Enceladus and Dione, the large orange moon Titan, and icy Mimas. Due to the angle of the Sun, they are each preceded by their own shadow.

These rare moon transits only happen when the tilt of Saturn's ring plane is nearly edge-on as seen from the Earth. Saturn's rings will be perfectly edge on to our line of sight on 10 August and 4 September 2009. Unfortunately, Saturn will be too close to the Sun to be seen by viewers on Earth at that time. This ring-plane crossing occurs every 14-15 years. In 1995-96 Hubble witnessed the previous ring plane crossing, as well as many moon transits, and helped to discover several new moons of Saturn.

Early 2009 was a favourable time for viewers with small telescopes to watch moon and shadow transits crossing the face of Saturn. Titan, Saturn's largest moon, crossed Saturn on four separate occasions: 24 January, 9 February, 24 February and 12 March, although not all events were visible from all locations on Earth.

Italian Galileo Galilei — often referred to as the father of astronomy — was the first to observe Saturn through a telescope in 1610. Dutch mathematician and astronomer Christian Huygens discovered Titan in 1655 and, 350 years later, the ESA probe named for him touched down on Titan (on 14 January 2005), giving the world its first views of the surface of the mysterious, icy world. Giovanni Domenico Cassini, a French/Italian astronomer, discovered Dione (in addition to others) and the German-born Englishman, William Herschel, discovered Mimas and Enceladus.

These pictures were taken with Hubble's Wide Field Planetary Camera 2 on 24 February 2009, when Saturn was at a distance of roughly 1.25 thousand million kilometres from Earth. Hubble can see details as small as 300 kilometres across on Saturn. The dark band running across the face of the planet slightly above the rings is the shadow of the rings cast on the planet.