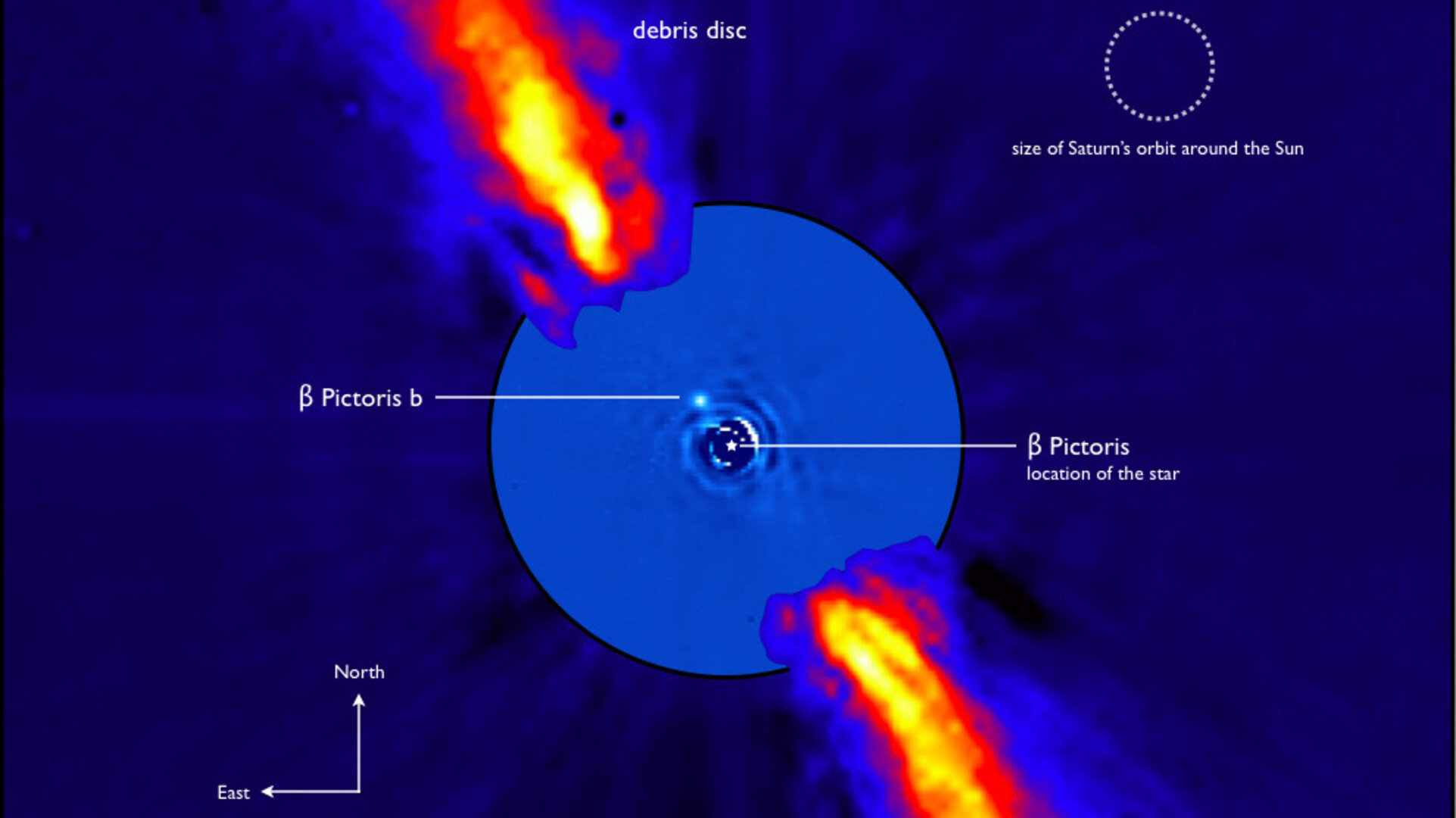 The mass of a very young exoplanet has been revealed for the first time using data from ESA’s star mapping spacecraft Gaia and its predecessor, the quarter-century retired Hipparcos satellite.

Astronomers Ignas Snellen and Anthony Brown from Leiden University, the Netherlands, deduced the mass of the planet Beta Pictoris b from the motion of its host star over a long period of time as captured by both Gaia and Hipparcos.

The planet is a gas giant similar to Jupiter but, according to the new estimate, is 9 to 13 times more massive. It orbits the star Beta Pictoris, the second brightest star in the constellation Pictor.

The planet was only discovered in 2008 in images captured by the Very Large Telescope at the European Southern Observatory in Chile. Both the planet and the star are only about 20 million years old – roughly 225 times younger than the Solar System. Its young age makes the system intriguing but also difficult to study using conventional methods.

“In the Beta Pictoris system, the planet has essentially just formed,” says Ignas. “Therefore we can get a picture of how planets form and how they behave in the early stages of their evolution. On the other hand, the star is very hot, rotates fast, and it pulsates.”

This behaviour makes it difficult for astronomers to accurately measure the star’s radial velocity – the speed at which it appears to periodically move towards and away from the Earth. Tiny changes in the radial velocity of a star, caused by the gravitational pull of planets in its vicinity, are commonly used to estimate masses of exoplanets. But this method mainly works for systems that have already gone through the fiery early stages of their evolution.

In the case of Beta Pictoris b, upper limits of the planet’s mass range had been arrived at before using the radial velocity method. To obtain a better estimate, the astronomers used a different method, taking advantage of Hipparcos’ and Gaia’s measurements that reveal the precise position and motion of the planet’s host star in the sky over time.

“The star moves for different reasons,” says Ignas. “First, the star circles around the centre of the Milky Way, just as the Sun does. That appears from the Earth as a linear motion projected on the sky. We call it proper motion. And then there is the parallax effect, which is caused by the Earth orbiting around the Sun. Because of this, over the year, we see the star from slightly different angles.”

And then there is something that the astronomers describe as ‘tiny wobbles’ in the trajectory of the star across the sky – minuscule deviations from the expected course caused by the gravitational pull of the planet in the star’s orbit. This is the same wobble that can be measured via changes in the radial velocity, but along a different direction – on the plane of the sky, rather than along the line of sight.

“We are looking at the deviation from what you expect if there was no planet and then we measure the mass of the planet from the significance of this deviation,” says Anthony. “The more massive the planet, the more significant the deviation.”

To be able to make such an assessment, astronomers need to observe the trajectory of the star for a long period of time to properly understand the proper motion and the parallax effect.

The Gaia mission, designed to observe more than one billion stars in our Galaxy, will eventually be able to provide information about a large amount of exoplanets. In the 22 months of observations included in Gaia’s second data release, published in April, the satellite has recorded the star Beta Pictoris about thirty times. That, however, is not enough.

“Gaia will find thousands of exoplanets, that’s still on our to-do list,” says Timo Prusti, ESA’s Gaia project scientist. “The reason that the exoplanets can be expected only late in the mission is the fact that to measure the tiny wobble that the exoplanets are causing, we need to trace the position of stars for several years.”

Combining the Gaia measurements with those from ESA’s Hipparcos mission, which observed Beta Pictoris 111 times between 1990 and 1993, enabled Ignas and Anthony to get their result much faster. This led to the first successful estimate of a young planet’s mass using astrometric measurements.

“By combining data from Hipparcos and Gaia, which have a time difference of about 25 years, you get a very long term proper motion,” says Anthony.

“This proper motion also contains the component caused by the orbiting planet. Hipparcos on its own would not have been able to find this planet because it would look like a perfectly normal single star unless we had measured it for a much longer time.

“Now, by combining Gaia and Hipparcos and looking at the difference in the long term and the short term proper motion, we can see the effect of the planet on the star.”

The result represents an important step towards better understanding the processes involved in planet formation, and anticipates the exciting exoplanet discoveries that will be unleashed by Gaia’s future data releases.

“The mass of the young planet Beta Pictoris b through the astrometric motion of its host star,” by I. Snellen and A. Brown is published in Nature Astronomy, 20 August 2018.