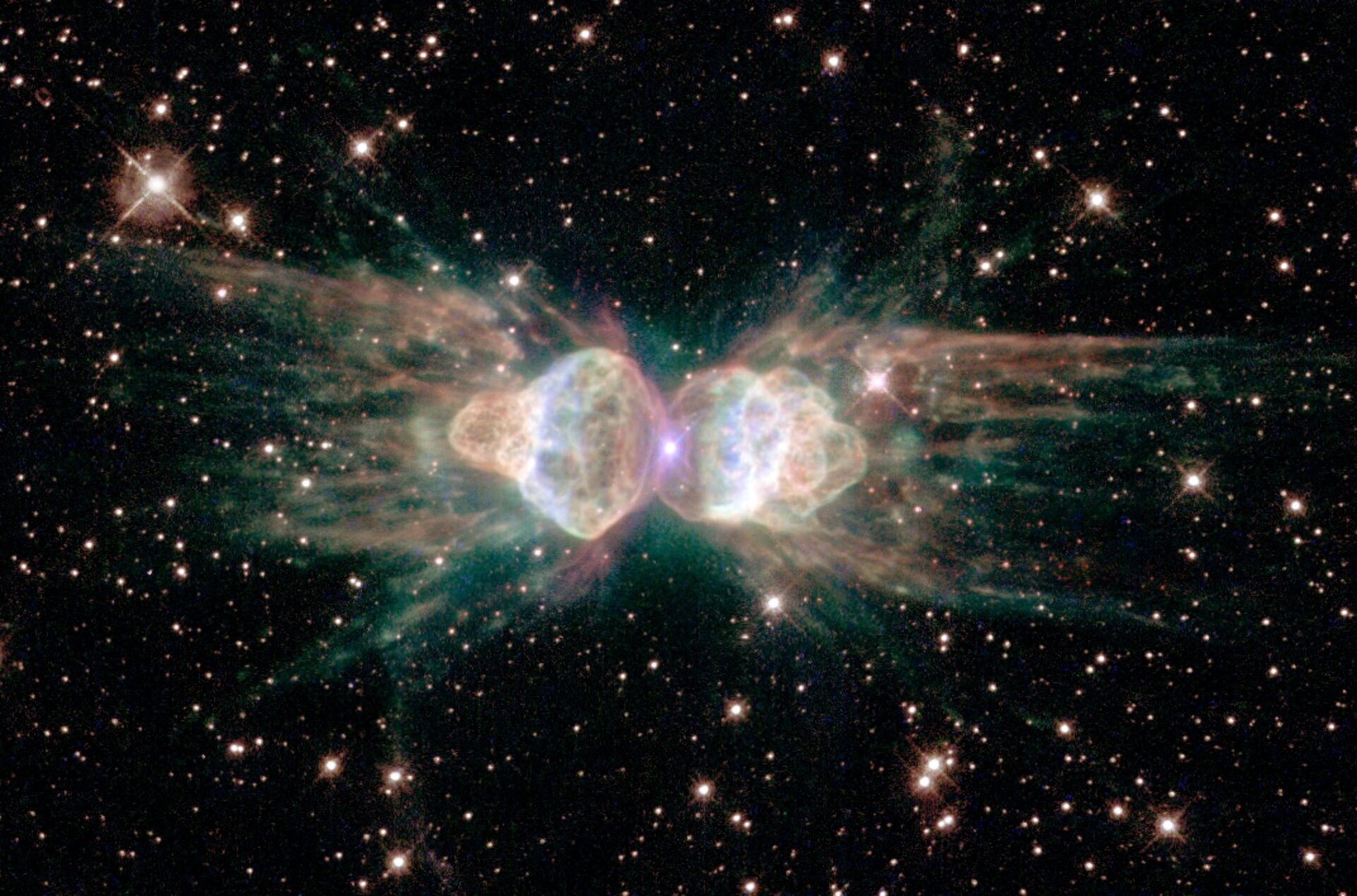 A rare phenomenon connected to the death of a star has been discovered in observations made by ESA’s Herschel space observatory: an unusual laser emission from the spectacular Ant Nebula, which suggests the presence of a double star system hidden at its heart.

When low- to middleweight stars like our Sun approach the end of their lives they eventually become dense, white dwarf stars. In the process, they cast off their outer layers of gas and dust into space, creating a kaleidoscope of intricate patterns known as a planetary nebula.

The infrared Herschel observations have shown that the dramatic demise of the central star in the core of the Ant Nebula is even more theatrical than implied by its colourful appearance in visible images – such as those taken by the NASA/ESA Hubble Space Telescope. As revealed by the new data, the Ant Nebula also beams intense laser emission from its core.

While lasers in everyday life today might mean special visual effects in music concerts, in space, focused emission is detected at different wavelengths under specific conditions. Only a few of these space infrared lasers are known.

By coincidence, astronomer Donald Menzel who first observed and classified this particular planetary nebula in the 1920s (it is officially known as Menzel 3 after him) was also one of the first to suggest that in certain conditions natural ‘light amplification by stimulated emission of radiation’ – from which the acronym ‘laser’ derives – could occur in gaseous nebulae. This was well before the discovery and first successful operation of lasers in laboratories in 1960, an occasion which is now celebrated annually on 16 May as International Day of Light.

“When we observe Menzel 3, we see an amazingly intricate structure made up of ionized gas, but we cannot see the object in its centre producing this pattern,” says Isabel Aleman, lead author of a paper describing the new results.

“Thanks to the sensitivity and wide wavelength range of the Herschel observatory, we detected a very rare type of emission called hydrogen recombination line laser emission, which provided a way to reveal the nebula’s structure and physical conditions.”

This kind of laser emission needs very dense gas close to the star. Comparison of the observations with models found that the density of the laser-emitting gas is around ten thousand times higher than that of the gas seen in typical planetary nebulae and in the lobes of the Ant Nebula itself.

Normally, the region close to the dead star – close in this case being about the distance of Saturn from the Sun – is quite empty, because most of its material is ejected outwards. Any lingering gas would soon fall back onto it.

“The only way to keep gas close to the star is if it is orbiting around it in a disc,” says co-author Albert Zijlstra. “In this case, we have actually observed a dense disc in the very centre that is seen approximately edge-on. This orientation helps to amplify the laser signal. The disc suggests the white dwarf has a binary companion, because it is hard to get the ejected gas to go into orbit unless a companion star deflects it in the right direction.”

Astronomers have not yet seen the expected second star, but they think that the mass from the dying companion star is being ejected and then captured by the compact central star of the original planetary nebula, producing the disc where the laser emission is produced.

“We used Herschel to characterise various components of gas and dust in nebula around old stars, but we were not necessarily looking for a laser phenomenon,” adds Toshiya Ueta, principal investigator of the Herschel Planetary Nebula Survey project. “Such emission has only been identified in a handful of objects before; this was a remarkable discovery that we did not anticipate. There is certainly more to stellar nebulae than meets the eye!”

“This study suggests that the distinctive Ant Nebula as we see it today was created by the complex nature of a binary star system, which influences the shape, chemical properties, and evolution in these final stages of a star’s life,” says Göran Pilbratt, ESA’s Herschel project scientist.

“Herschel offered the perfect observing capabilities to detect this extraordinary laser in the Ant Nebula. The findings will help constrain the conditions under which this phenomenon occurs, and help us to refine our models of stellar evolution. It is also a happy conclusion that the Herschel mission was able to connect together Menzel’s two discoveries from almost a century ago.”

The Herschel space observatory operated between 2009 and 2013.