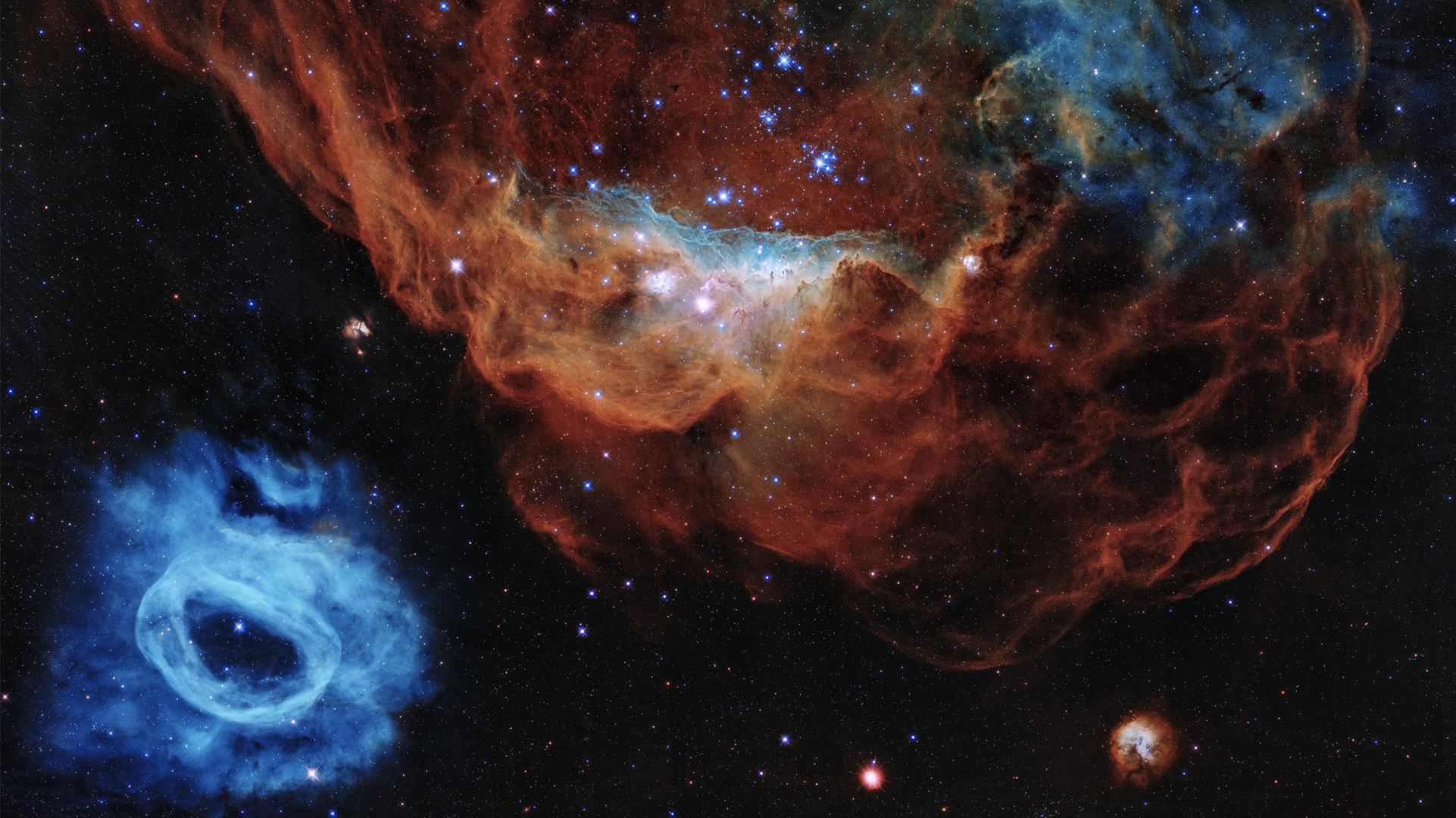 The NASA/ESA Hubble Space Telescope’s iconic images and scientific breakthroughs have redefined our view of the Universe. To commemorate three decades of scientific discoveries, this image is one of the most photogenic examples of the many turbulent stellar nurseries the telescope has observed during its 30-year lifetime.

The portrait features the giant nebula NGC 2014 and its neighbour NGC 2020 which together form part of a vast star-forming region in the Large Magellanic Cloud, a satellite galaxy of the Milky Way, approximately 163 000 light-years away. The image is nicknamed the ‘Cosmic Reef’ because it resembles an undersea world.

On 24 April 1990, the Hubble Space Telescope was launched on the Space Shuttle Discovery, along with a five-astronaut crew. Deployed into low Earth orbit a day later, the telescope has since opened our eyes to the cosmos and transformed our collective knowledge of the Universe.

Hubble has revolutionised modern astronomy not only for astronomers, but also for the public, taking them on a journey of exploration and discovery. Unlike any other telescope before it, Hubble has made astronomy relevant, engaging and accessible for people of all ages.

The mission has yielded to date 1.4 million observations and provided data that astronomers around the world have used to write more than 17 000 peer-reviewed scientific publications, making it one of the most prolific space observatories in history. Its rich data archive alone will fuel future astronomy research for generations to come.

Each year, Hubble has a small portion of its precious observing time dedicated to taking a special anniversary image, showcasing particularly beautiful and meaningful objects. These observations continue to challenge scientists with surprising new findings and to fascinate the public with ever more evocative images. 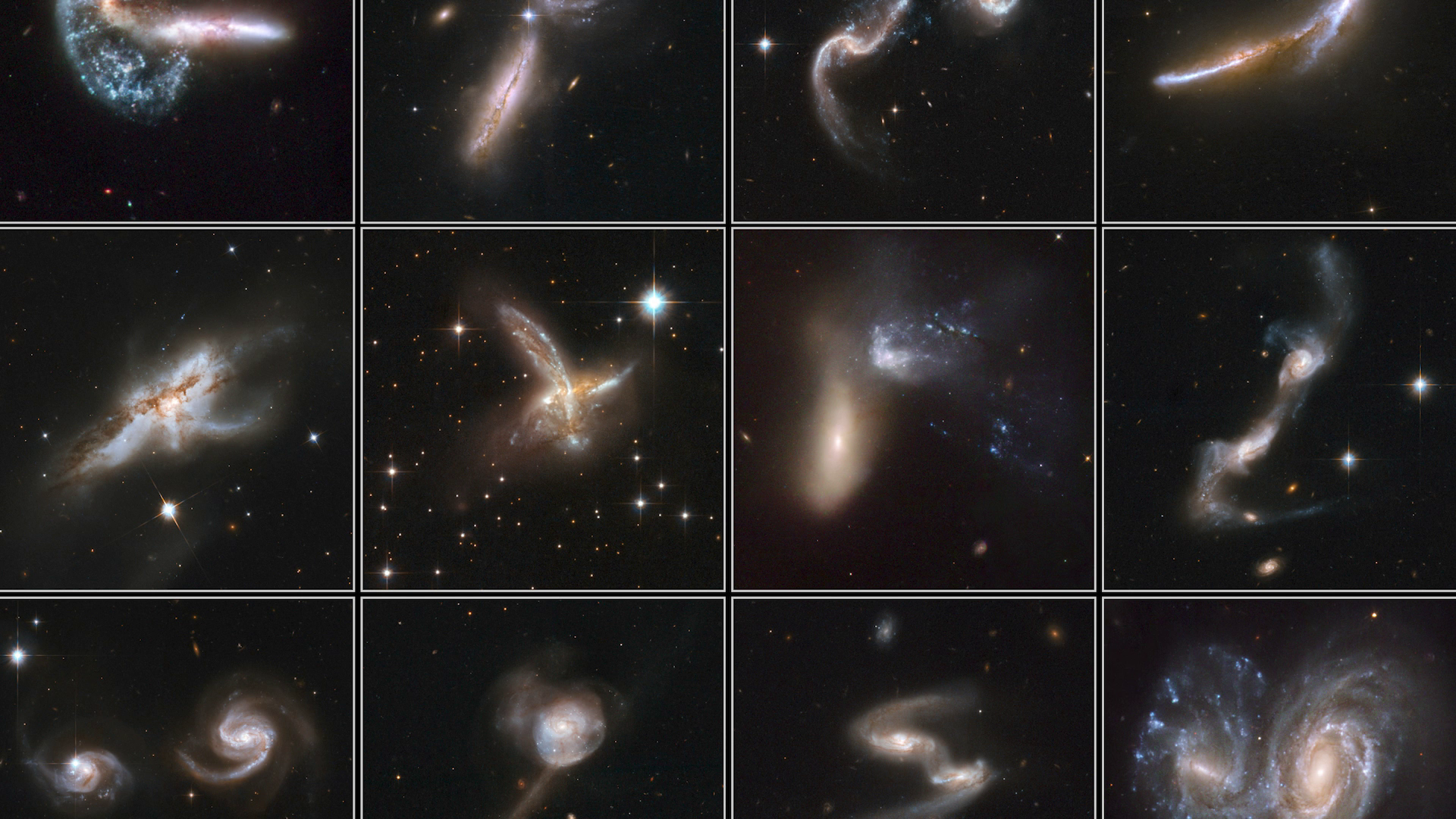 This year, Hubble is celebrating this new milestone with a portrait of two colourful nebulae that reveals how energetic, massive stars sculpt their homes of gas and dust. Although NGC 2014 and NGC 2020 appear to be separate in this visible-light image, they are actually part of one giant star formation complex.

The star-forming regions seen here are dominated by the glow of stars at least 10 times more massive than our Sun. These stars have short lives of only a few million years, compared to the 10-billion-year lifetime of our Sun.

The sparkling centrepiece of NGC 2014 is a grouping of bright, massive stars near the centre of the image that has blown away its cocoon of hydrogen gas (coloured red) and dust in which it was born. A torrent of ultraviolet radiation from the star cluster is illuminating the landscape around it.

These massive stars also unleash fierce winds that are eroding the gas cloud above and to the right of them. The gas in these areas is less dense, making it easier for the stellar winds to blast through them, creating bubble-like structures reminiscent of coral, that have earned the nebula the nickname ‘Brain Coral’. 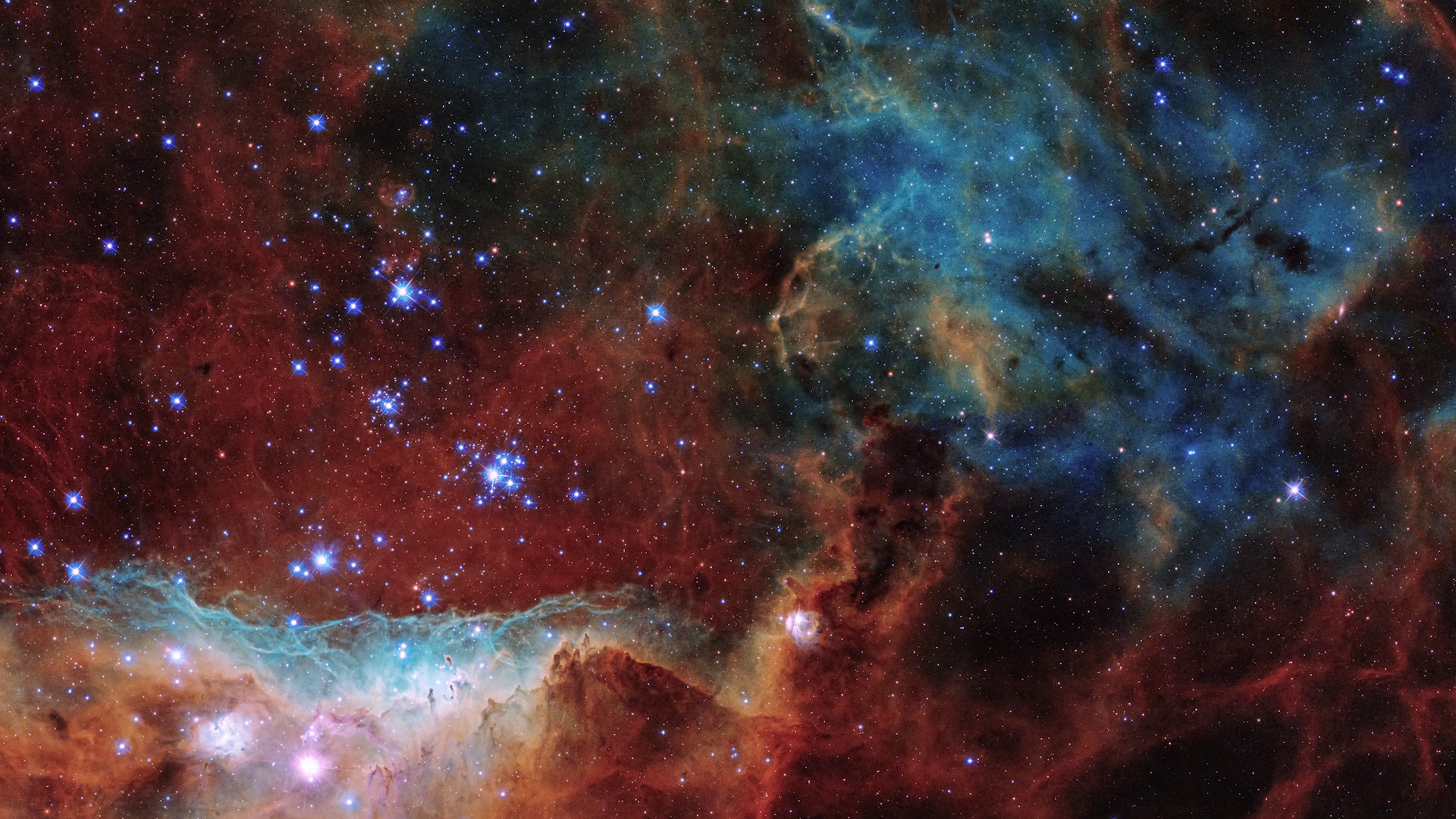 By contrast, the blue-coloured nebula below NGC 2014 has been shaped by one mammoth star that is roughly 200 000 times more luminous than our Sun. It is an example of a rare class of stars called Wolf-Rayet stars, thought to be the descendants of the most massive stars. Wolf-Rayet stars are very luminous and have a high rate of mass loss through powerful winds.

The star in this Hubble image is 15 times more massive than our Sun and is unleashing powerful winds, which have cleared out the area around it. It has ejected its outer layers of gas, sweeping them around into a cone-like shape, and exposing its searing hot core.

The behemoth appears offset from the centre because the telescope is viewing the cone from a slightly tilted angle. In a few million years, the star might become a supernova. The brilliant blue colour of the nebula comes from oxygen gas that is heated to roughly 11 000 °C, which is much hotter than the hydrogen gas surrounding it. 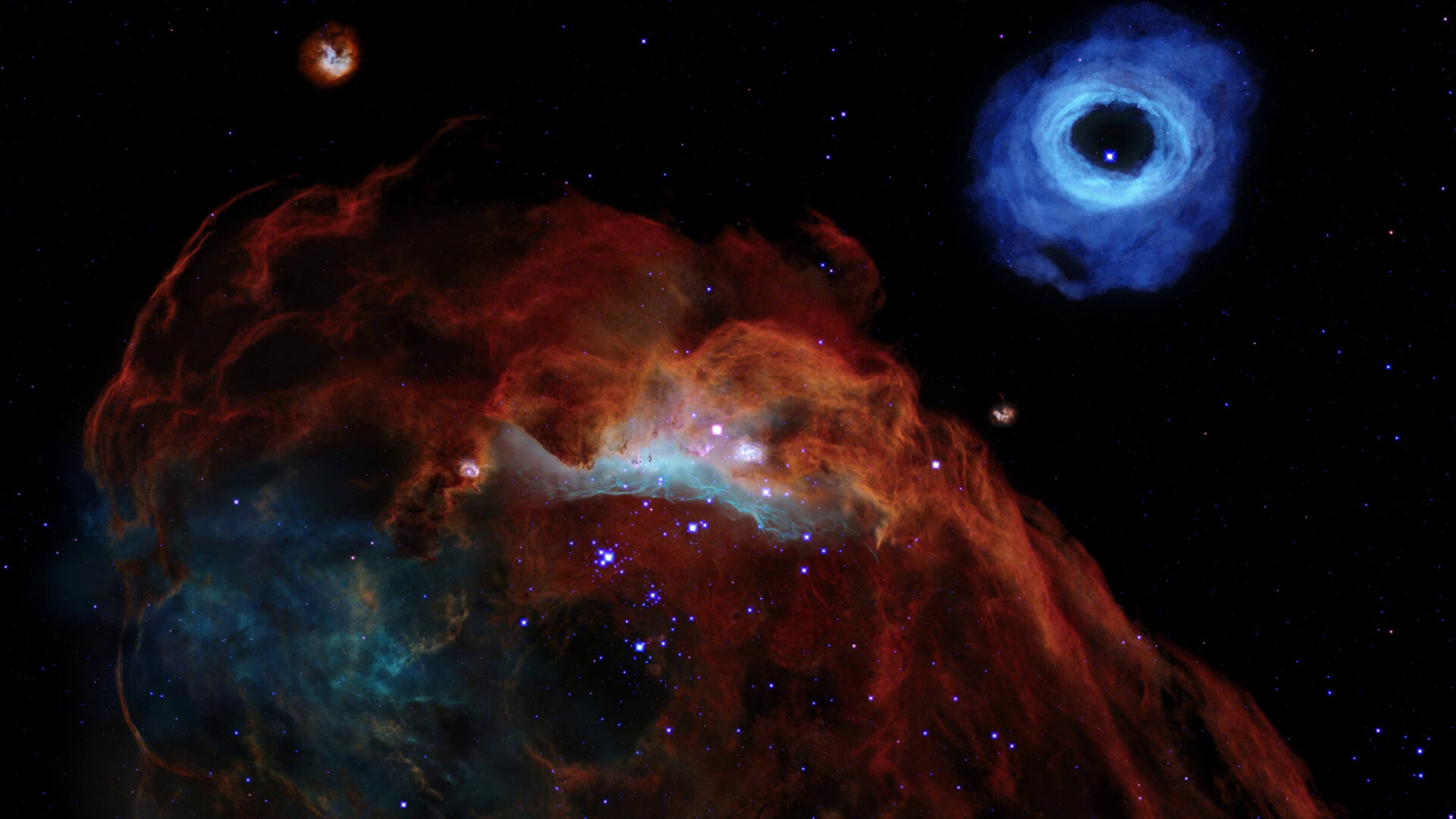 A 3D animation of the Cosmic Reef, exploring the star-forming region featured in the Hubble's 30th anniversary image in impressive detail.
Access the video

Stars, both big and small, are born when clouds of dust and gas collapse because of gravity. As more material falls onto the forming star, it finally becomes hot and dense enough at its centre to trigger the nuclear fusion reactions that make stars, including our Sun, shine.

Massive stars make up only a few percent of the billions of stars in our Universe. Yet they play a crucial role in shaping our Universe, through stellar winds, supernova explosions, and the production of heavy elements.

“The Hubble Space Telescope has shaped the imagination of truly a whole generation, inspiring not only scientists, but almost everybody,” said Prof. Günther Hasinger, ESA Director of Science.

“It is paramount for the excellent and long-lasting cooperation between NASA and ESA.” 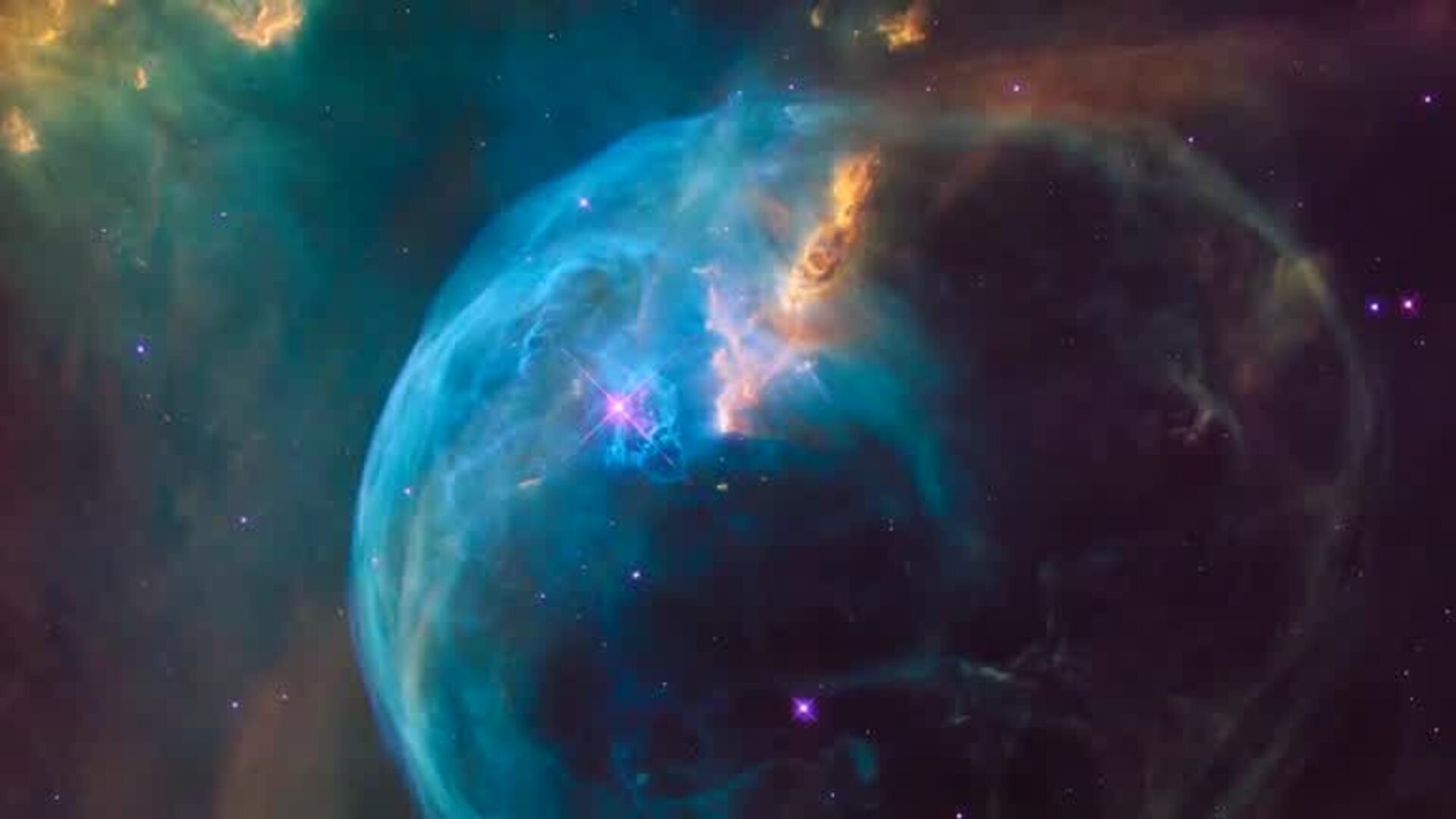 Since its launch 30 years ago, the Hubble Space Telescope has shown us distant galaxies and spectacular nebulae, revealed supermassive black holes and planets in distant solar systems; and has proved that the Universe is not only expanding, the expansion is accelerating.
Access the video

About the Hubble Space Telescope

The Hubble Space Telescope is a project of international cooperation between ESA and NASA.
This anniversary image was taken with the Telescope’s Wide Field Camera 3.