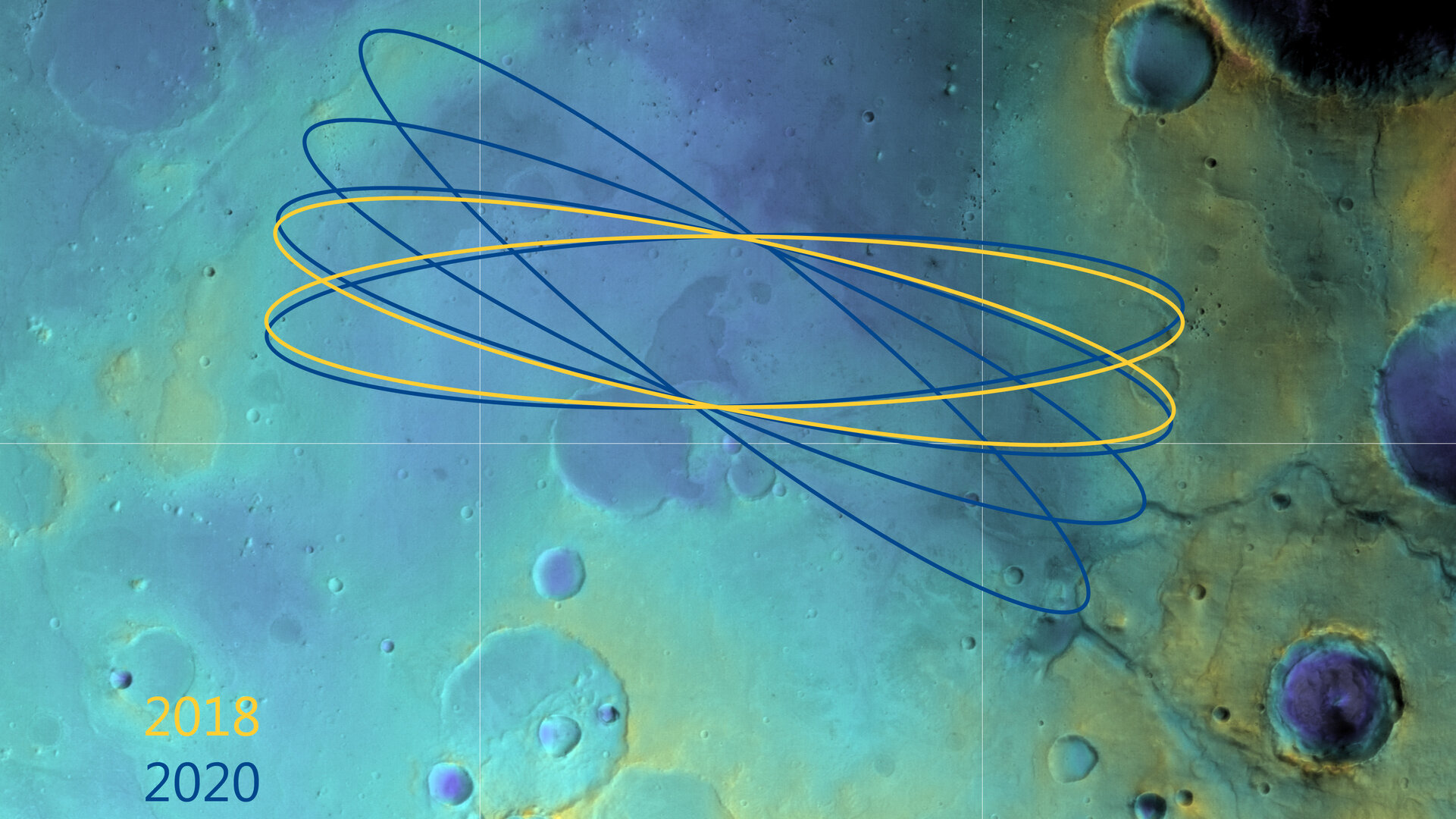 Oxia Planum has been recommended as the primary candidate for the landing site of the ExoMars 2018 mission.

ExoMars 2018, comprising a rover and surface platform, is the second of two missions making up the ExoMars programme, a joint endeavour between ESA and Russia’s Roscosmos. Launch is planned for May 2018, with touchdown on the Red Planet in January 2019.

Meanwhile, the Trace Gas Orbiter and the Schiaparelli entry, descent and landing demonstrator module will be launched in March 2016, arriving at Mars around this time next year.

Schiaparelli will land in Meridiani Planum. The orbiter will study the atmosphere and act as a relay for the second mission.

The search for a suitable landing site for the second mission began in December 2013, when the science community was asked to propose candidates. In October 2014, the Landing Site Selection Working Group chose four sites. The last year has been spent evaluating these sites, taking into account the engineering constraints of descent and landing, and the best possible scientific return of the mission

The main goal for the rover is to search for evidence of martian life, past or present, in an area with ancient rocks where liquid water was once abundant. A drill is capable of extracting samples from up to 2 m below the surface. This is crucial, because the present surface of Mars is a hostile place for living organisms owing to the harsh solar and cosmic radiation. By searching underground, the rover has more chance of finding preserved evidence.

Scientists believe that primitive life could have gained a foothold when the surface environment was wetter, more than 3.6 billion years ago. Buried or recently exhumed layered sedimentary deposits thus offer the best window into this important period of Mars history.

All four sites under study – Aram Dorsum, Hypanis Vallis, Mawrth Vallis and Oxia Planum – show evidence of having been influenced by water in the past, and are likely representative of global processes operating in the Red Planet’s early history.

All locations offer the opportunity of landing at a scientifically interesting site or finding one within a 1 km drive from the touchdown point, with numerous targets accessible along a typical 2 km traverse planned for the mission of 218 martian days (each 24 hours 37 minutes).

The sites must also conform to strict engineering constraints to ensure the safe entry, descent and landing of the entry module. These include the need for a relatively low-lying site, in order that the module passes through enough atmosphere for the completion of key events such as parachute opening and deceleration.

The horizontal and vertical wind speeds expected during the descent must also be also considered – it will land at the end of the planet’s global dust storm season in 2019.

Knowledge of how the terrain slopes over various scales is important, because the lander uses radar to monitor its velocity and altitude. Slopes can alter the degree of certainty in the measured distance to the ground, with implications for fuel consumption and landing.

Steep slopes and boulders taller than 35 cm – the clearance beneath the landing module – need to be avoided, although the rover will be able to navigate around local hazards after egress.

Taking into account these requirements and the individual science cases put forward for each site, the Landing Site Selection Working Group today recommended that Oxia Planum be the primary focus for further detailed evaluation for the 2018 mission.

Oxia Planum contains one of the largest exposures of rocks on Mars that are around 3.9 billion years old and clay-rich, indicating that water once played a role here.

The site sits in a wide catchment area of valley systems with the exposed rocks exhibiting different compositions, indicating a variety of deposition and wetting environments.

A period of volcanic activity may have covered early clays and other aqueous deposits, offering preservation for biosignatures against the planet's harsh radiation and oxidation environment, and have only been exposed by erosion within the last few hundred million years.

“Compared with landing site selection for previous missions, which relied primarily on the morphology of candidate sites alone, we are today in a much better position to understand the mineralogy of the various sites,” adds Jorge.

“This puts us in the best position to choose sites that offer access to the most ancient, pristine material that not only preserves a record of early Mars but which is globally representative of processes occurring across the planet.

“It made for a challenging decision today, given the quality of the cases for all sites, but we are looking forward to the next stage of analysis as we move closer to the launch of our exciting mission: our rover will search for molecular biosignatures in the subsurface for the very first time.”

Selection of the final landing site by ESA and Roscosmos is planned to occur six months before launch.