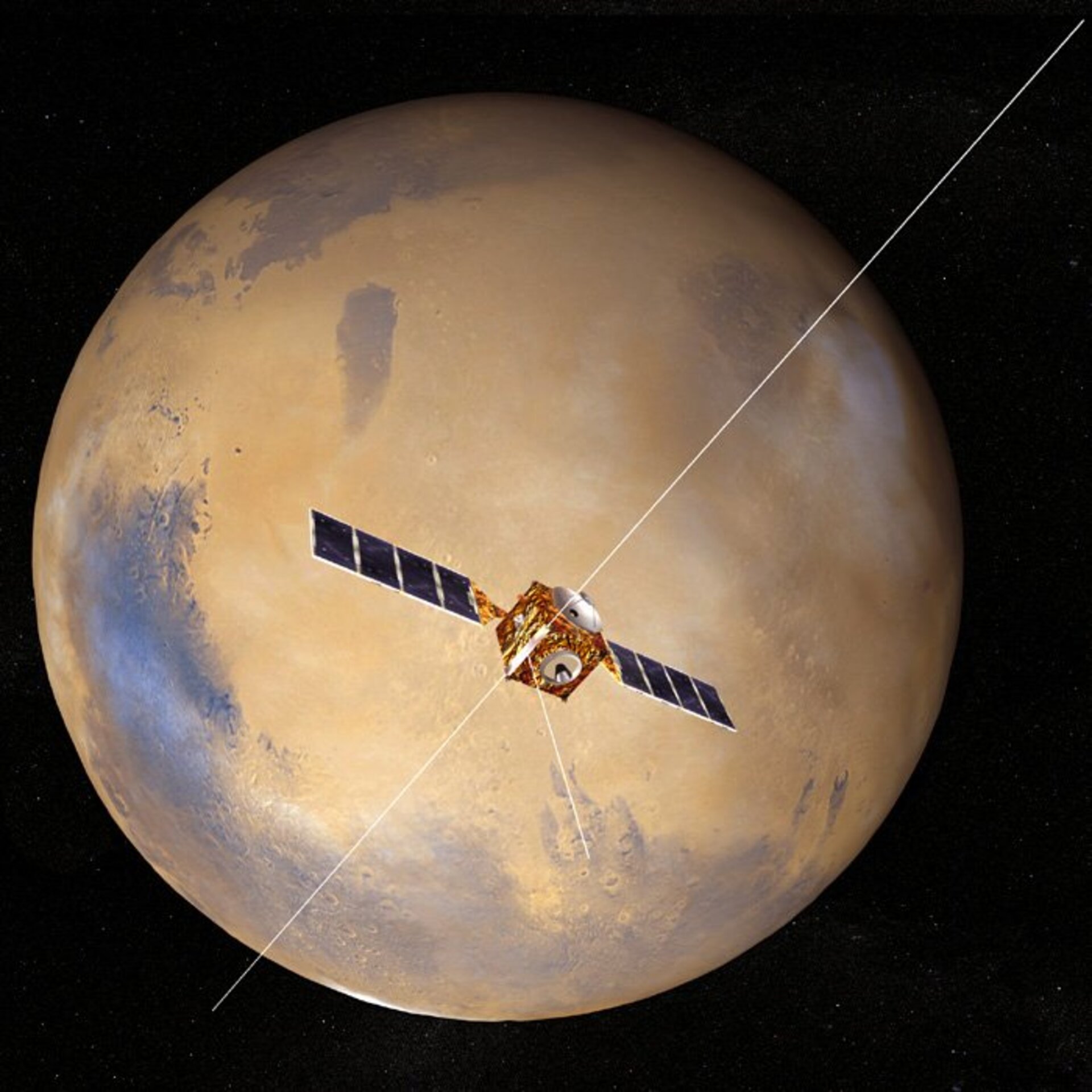 ESA’s Mars Express mission has been extended by one Martian year, or about 23 months, from the beginning of December 2005.

The decision, taken on 19 September by ESA’s Science Programme Committee, allows the spacecraft orbiting the Red Planet to continue building on the legacy of its own scientific success.

Co-ordinated from the beginning with the Mars science and exploration activities of other agencies, Mars Express has revealed an increasingly complex picture of Mars.

Since the start of science operations in early 2004, new aspects of Mars are emerging day by day, thanks to Mars Express data. These include its present-day climate system, and its geological ‘activity’ and diversity. Mars Express has also started mapping water in its various states.

In building up a global data set for composition and characteristics of the surface and atmosphere, Mars Express has revealed that volcanic and glacial processes are much more recent than expected.

It has confirmed the presence of glacial processes in the equatorial regions, and mapped water and carbon dioxide ice, either mixed or distinct, in the polar regions. Through mineralogical analysis, it found out that large bodies of water, such as lakes or seas, might not have existed for a long period of time on the Martian surface.

Mars Express has also detected methane in the Martian atmosphere. This, together with the possible detection of formaldehyde, suggests either current volcanic activity on Mars, or, more excitingly, that there are current active ‘biological’ processes.

This hypothesis may be reinforced by the fact that Mars Express saw that the distribution of water vapour and methane, both ingredients for life, substantially overlap in some regions of the planet.

Furthermore, the mission detected aurorae for the first time on the Red Planet. It has made global mapping of the density and pressure of the atmosphere between 10 and 100 kilometres altitude, and studied atmospheric escape processes in the upper layers of the atmosphere. This is contributing to our understanding of the weather and climate evolution of the planet.

There is still much to be discovered by the extraordinary set of instruments on board Mars Express. First, the 23-month extension will enable the Mars Express radar, MARSIS, to restart Martian night-time measurements in December this year.

MARSIS will continue its subsurface studies mainly in the search for liquid and frozen water. By combining subsurface, surface and atmospheric data, Mars Express will provide an unprecedented global picture of Mars and, in particular, its water.

So far, the High Resolution Stereo Camera has imaged only 19% of the Martian surface at high resolution. In the extended phase, it will be able to continue the 3D high-resolution colour imaging. After the Viking missions, Mars Express is building today’s legacy of Mars imagery for present and future generations of scientists.

Thanks to the extension, Mars Express will also be able to study for a second year the way the atmosphere varies during different seasons, and to observe again variable phenomena such as frost, fog or ice.

Finally, Mars Express will be able to revisit those areas where major discoveries, such as new volcanic structures, sedimentary layering, methane sources, nightglow and auroras, have been made, thus allowing to confirm and understand all aspects related to these discoveries.

ESA’s Mars Express mission was successfully launched on 2 June 2003 from Baikonur, Kazakhstan, on board a Russian Soyuz rocket with a Fregat upper stage. Besides being Europe’s first mission to Mars, Mars Express is the first fully European mission to any planet.

Following the Mars Express spacecraft commissioning at Mars in January 2004, most experiments on board began their calibration and testing phase while already acquiring scientific data. This phase lasted until June 2004 when all the commissioned instruments started their routine operations. The MARSIS radar antenna deployment was postponed for technical reasons until May 2005, and it became operational in July 2005.

Further to providing an impressive wealth of scientific results on its own, Mars Express has also successfully co-operated with NASA’s Mars Exploration Rovers, in terms of co-ordinated scientific observations and to test Mars Express in relaying the rover data to Earth. Further scientific collaboration between Mars Express and both rovers and Mars Odyssey is expected during the remainder of the nominal mission and the extended mission, and with NASA’s Mars Reconnaissance Orbiter mission during the extended mission.