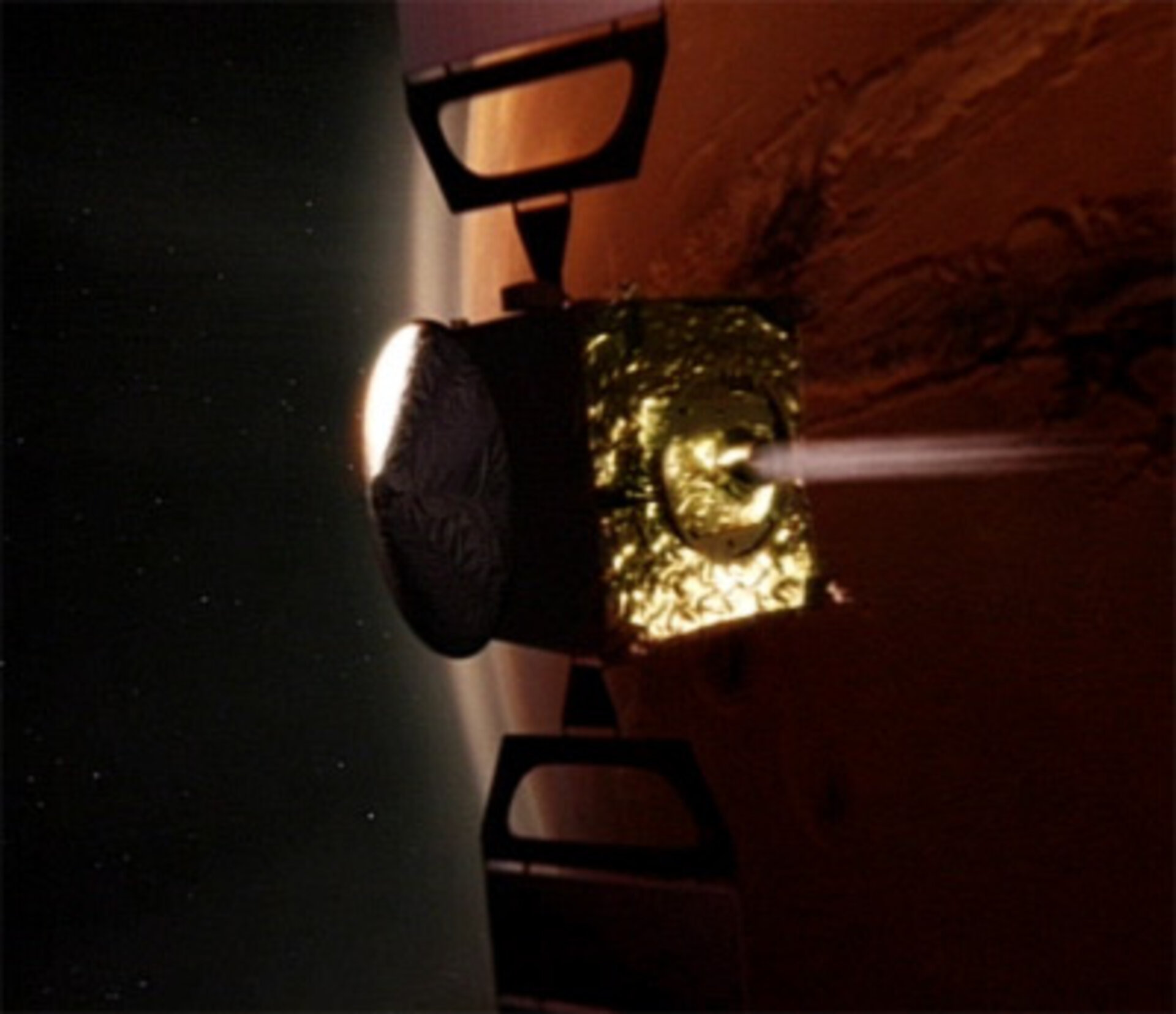 ESA PR 84-2003. This morning, after a journey lasting 205 days and covering 400 million kilometres, the European Mars Express space probe fired its main engine at 03:47 CET for a 37-minute burn in order to enter an orbit around Mars.

This firing gave the probe a boost so that it could match the higher speed of the planet on its orbit around the Sun and be captured by its gravity field, like climbing in a spinning merry-go-round. This orbit insertion manoeuvre was a complete success.

This is a great achievement for Europe on its first attempt to send a space probe into orbit around another planet.

At approximately the same time, the Beagle 2 lander, protected by a thermal shield, entered the Martian atmosphere at high velocity and is expected to have reached the surface at about 03:52 CET. However, the first attempt to communicate with Beagle 2, three hours after landing, via NASA’s Mars Odyssey orbiter, did not establish radio contact. The next contact opportunity will be tonight at 23:40 CET.

The tiny lander was released from the orbiter six days ago on a collision course towards the planet. Before separation, its on-board computer was programmed to operate the lander on its arrival at the surface, by late afternoon (Martian time). According to the schedule, the solar panels must deploy to recharge the on-board batteries before sunset. The same sequence also tells Beagle 2 to emit a signal at a specific frequency for which the Jodrell Bank Telescope, UK, will be listening later tonight. Further radio contacts are scheduled in the days to come.

In the course of the coming week, the orbit of Mars Express will be gradually adjusted in order to prepare for its scientific mission. Mars Express is currently several thousand kilometres away from Mars, in a very elongated equatorial orbit. On 30 December, ESA's ground control team will send commands to fire the spacecraft's engines and place it in a polar, less-elongated orbit (about 300 kilometres pericentre, 10000 apocentre, 86° inclination). From there, ESA's spacecraft will perform detailed studies of the planet's surface, subsurface structures and atmosphere. Commissioning of some of the on-board scientific instruments will begin towards mid-January and the first scientific data are expected later in the month.

“The arrival of Mars Express is a great success for Europe and for the international science community. Now, we are just waiting for a signal from Beagle 2 to make this Christmas the best we could hope for!” said David Southwood, head of ESA’s Science Directorate. “With Mars Express, we have a very powerful observatory in orbit around Mars and we look forward to receiving its first results. Its instruments will be able to probe the planet from its upper atmosphere down to a few kilometres below the surface, where we hope to find critical clues concerning the conditions for life, in particular traces of water. We expect this mission to give us a better understanding of our neighbour planet, of its past and its present, answering many questions for the science community and probably raising an even greater number of fascinating new ones. I hope we can see it as opening up a new era of European exploration”.