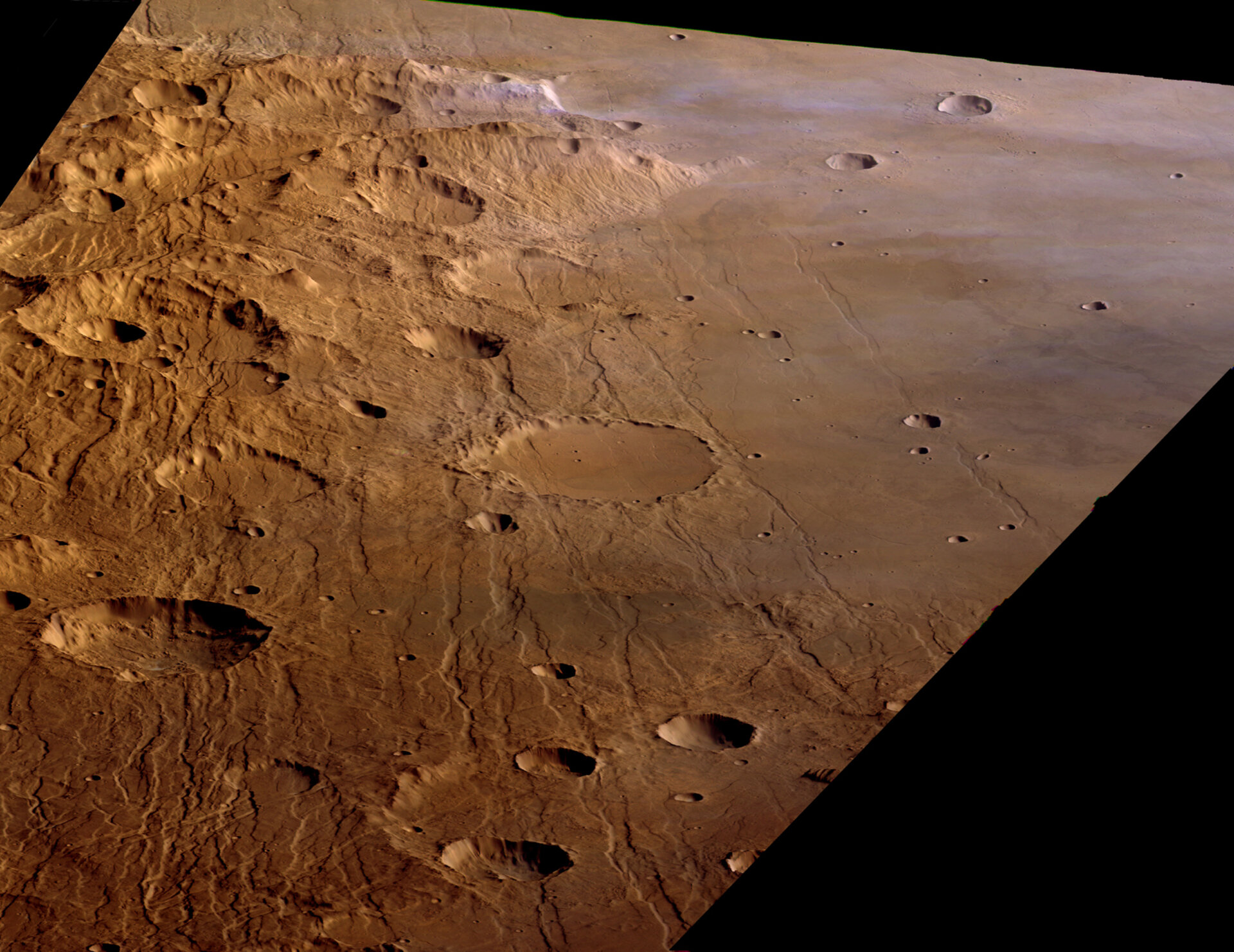 These images, taken by the High Resolution Stereo Camera (HRSC) on board ESA’s Mars Express spacecraft, show the Claritas Fossae tectonic grabens and part of the Solis Planum plains.

The images were taken during orbit 508 in June 2004 with a ground resolution of approximately 40 metres per pixel. The displayed region is the eastern part of Claritas Fossae and the western part of Solis Planum at longitude 260° East and latitude of about 28° South.

The Claritas Fossae (‘fossa’ is Latin for trough) region is characterised by systems of ‘grabens’ running mainly north-west to south-east. These can be traced several hundred kilometres up to the northern Tharsis shield volcanoes.

A graben forms when a block of the planet’s crust drops down between two faults, due to extension, or pulling, of the crust.

Grabens are often seen together with features called ‘horsts’, which are upthrown blocks lying between two steep-angled fault blocks.

A ‘horst and graben’ system can occur where there are several parallel faults.

Geographically, the grabens separate the eastern volcanic plains of the Solis Planum region from the western Daedalia Planum lava plains.

The lava blankets of the Solis Planum area cover the eastern parts of the older Claritas Fossae ridge and surround some of the higher ground.

The geological history of this region can be reconstructed by analysing the layers of tectonic grabens, impact craters, volcanic features and even small valley networks.

The complexity of this superposition record suggests that some of the events took place at the same time.

The detailed view of the large southern impact crater shows patches of dark material which are located near the central and marginal parts of the impact crater floor. This material may be of volcanic origin.

Image resolution has been decreased for use on the internet. The colour images were processed using the nadir (vertical view) and colour channels. The perspective views were calculated from the digital terrain model derived from the stereo channels.

The HRSC experiment on ESA’s Mars Express mission is led by the Principal Investigator Prof. Gerhard Neukum of the Freie Universität Berlin, who also designed the camera. The experiment’s science team consists of 45 Co-Investigators from 10 nations.

The camera was developed at the German Aerospace Centre (DLR) and built in co-operation with industrial partners EADS Astrium, Lewicke Microelectronic GmbH and Jena-Optronic GmbH. The HRSC is operated by DLR Institute of Planetary Research through ESA’s European Space Operations Centre, Darmstadt.

The systematic processing of image data is carried out at DLR. The images shown here were processed by the FU Berlin group in co-operation with DLR, Berlin.