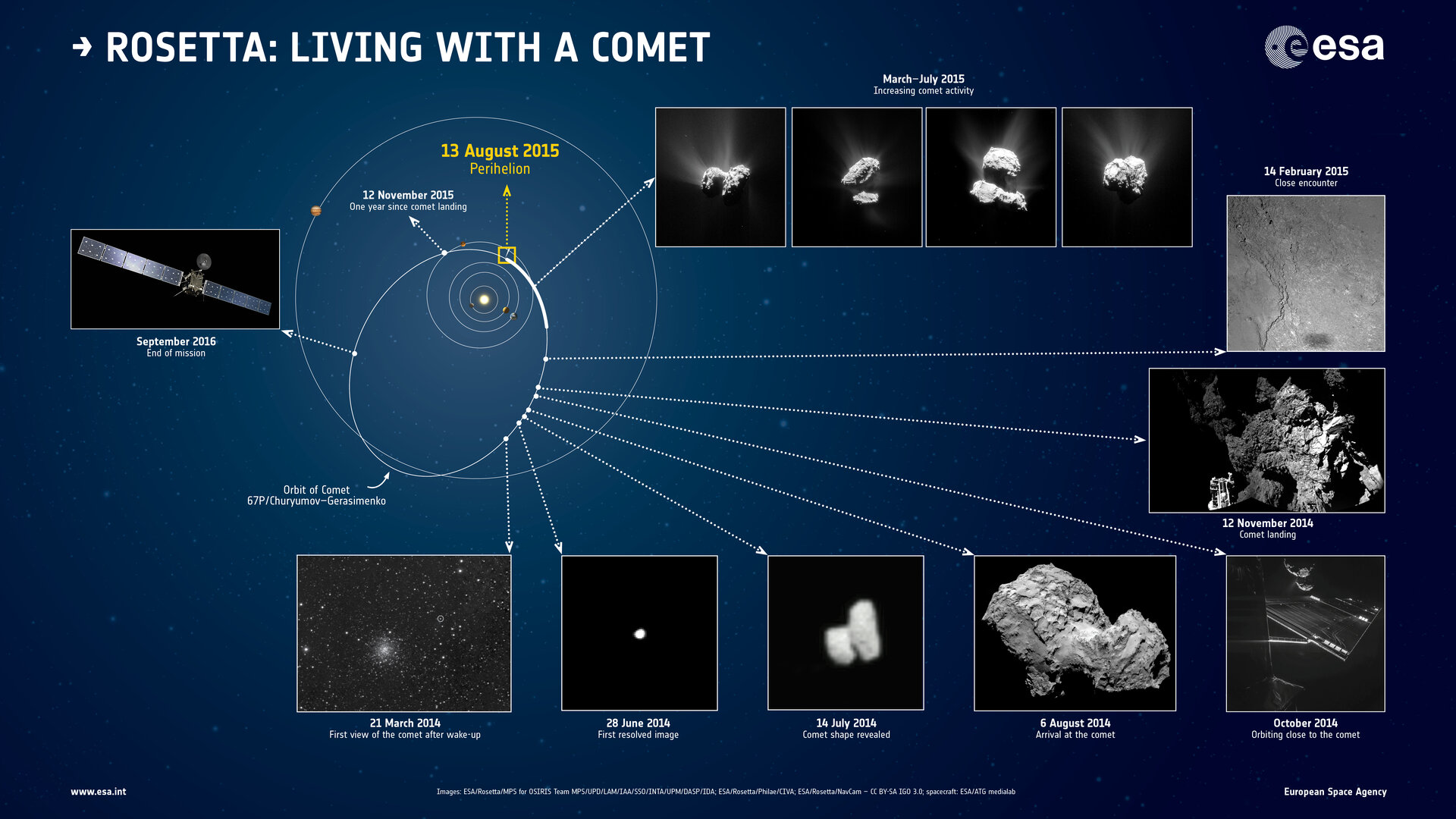 ESA’s Rosetta mission today celebrates one year at Comet 67P/Churyumov–Gerasimenko, with its closest approach to the Sun now just one week away.

It’s been a long but exciting journey for Rosetta since its launch in 2004, featuring Earth, Mars and two asteroid flybys before arriving at its ultimate destination on 6 August 2014. Over the following months, the mission became the first ever to orbit a comet and the first to soft land a probe – Philae – on its surface.

The mission teams have had to overcome many challenges in learning to fly in an unpredictable and sometimes inhospitable environment, and the spacecraft has returned a wealth of outstanding scientific data from this intriguing comet, spanning its interior, the dramatic surface and the surrounding cloud of dust, gas and plasma.

“This mission is about scientific discovery and every day there is something new to wonder at and try to understand,” says Nicolas Altobelli, acting Rosetta project scientist.

“A year of observations near to the comet has provided us with a wealth of information about it, and we’re looking forward to another year of exploration.”

Highlights thus far have included the discovery that the comet’s water vapour has a different ‘flavour’ to Earth’s oceans, fuelling the debate on the possible role of comets and asteroids in delivering water to our planet in its early history.

The first detection of molecular nitrogen in a comet provided important clues about the temperature environment in which the comet was ‘born’. Molecular nitrogen was common when the Solar System was forming, but required very low temperatures to become trapped in ice, so Rosetta’s measurements support the theory that comets originate from the cold and distant Kuiper Belt.

Data collected by Rosetta and Philae during the lander’s descent to the surface have allowed scientists to deduce that the comet’s nucleus is non-magnetised, at least on large scales.

Although magnetic fields are thought to have played an important function in moving small, magnetised dust grains around in the infant Solar System, the Rosetta and Philae measurements show that they did not continue to play a significant role once the particles had agglomerated to form larger building blocks metres and tens of metres across.

These are just a few of the myriad examples of the scientific discoveries being made by Rosetta, and most of them come from data taken in the early part of the comet-phase activities.

Now the comet and spacecraft are a week from perihelion, the point on its 6.5-year orbit that takes it closest to the Sun. On 13 August, they will be 186 million kilometres from the Sun, about a third of the distance at rendezvous last August.

“The period around perihelion is scientifically very important, as the heat from the Sun and the resulting outflow of gas and dust build to a maximum, providing us with important insights into this key time in the overall life cycle of the comet,” says Nicolas.

“For example, surface changes may reveal fresh material that has yet to be altered by solar radiation or cosmic rays, giving us a window into the comet’s subsurface layers – this will be the first time ever in cometary exploration that surface changes can be monitored in relation with increased activity.”

Rosetta has been watching its activity increase over the last months, as its frozen ices warm, turn to gas, and jet into space, dragging the comet’s dust along with it. Together, the gas and dust have created a fuzzy atmosphere, or coma, around the nucleus and a long tail stretching over 120 000 km into space that can only be seen from afar.

Rosetta has a unique ringside seat for studying where and how this activity arises on the surface of the comet. Earlier in 2015, the spacecraft approached to within just 6 km to carry out its measurements, but as the level of gas and dust has increased over the last few months, Rosetta has been studying the comet from safer distances, and is currently operating 250–300 km away.

“As we’ve been approaching perihelion, near-comet operations have proven to be especially challenging: the increasing level of cometary dust confuses Rosetta’s startrackers and without them working properly Rosetta can’t position itself in space,” says Rosetta Spacecraft Operations Manager, Sylvain Lodiot.

“All the teams involved, including flight control, flight dynamics and science operations, have had to learn to adapt to these conditions ‘on the fly’. We have had to fully rethink how we operate the spacecraft, and plan science activities on timescales of just a few days or weeks. This has been a major challenge, but it certainly makes the mission even more exciting.”

One important aspect of Rosetta’s long-term study will be to watch how the activity subsides again in the months following perihelion. The hope is that Rosetta will eventually be able to get closer to the nucleus again and see how the surface changed during its close encounter with the Sun.

“One year after arriving, Rosetta has accumulated a number of impressive successes, from the landing of Philae, to the many scientific discoveries that are being made and published,” says Patrick Martin, Rosetta Mission Manager.

“The scientific harvest is set to continue into next year as we watch the comet’s post-perihelion behaviour, ahead of Rosetta’s grand finale in September 2016, when we plan to land the orbiter on the comet.”

Browse our new “Year at a comet” image gallery here.

Learn more about perihelion in our FAQ here.

About Rosetta
Rosetta is an ESA mission with contributions from its Member States and NASA. Rosetta’s Philae lander is contributed by a consortium led by DLR, MPS, CNES and ASI.