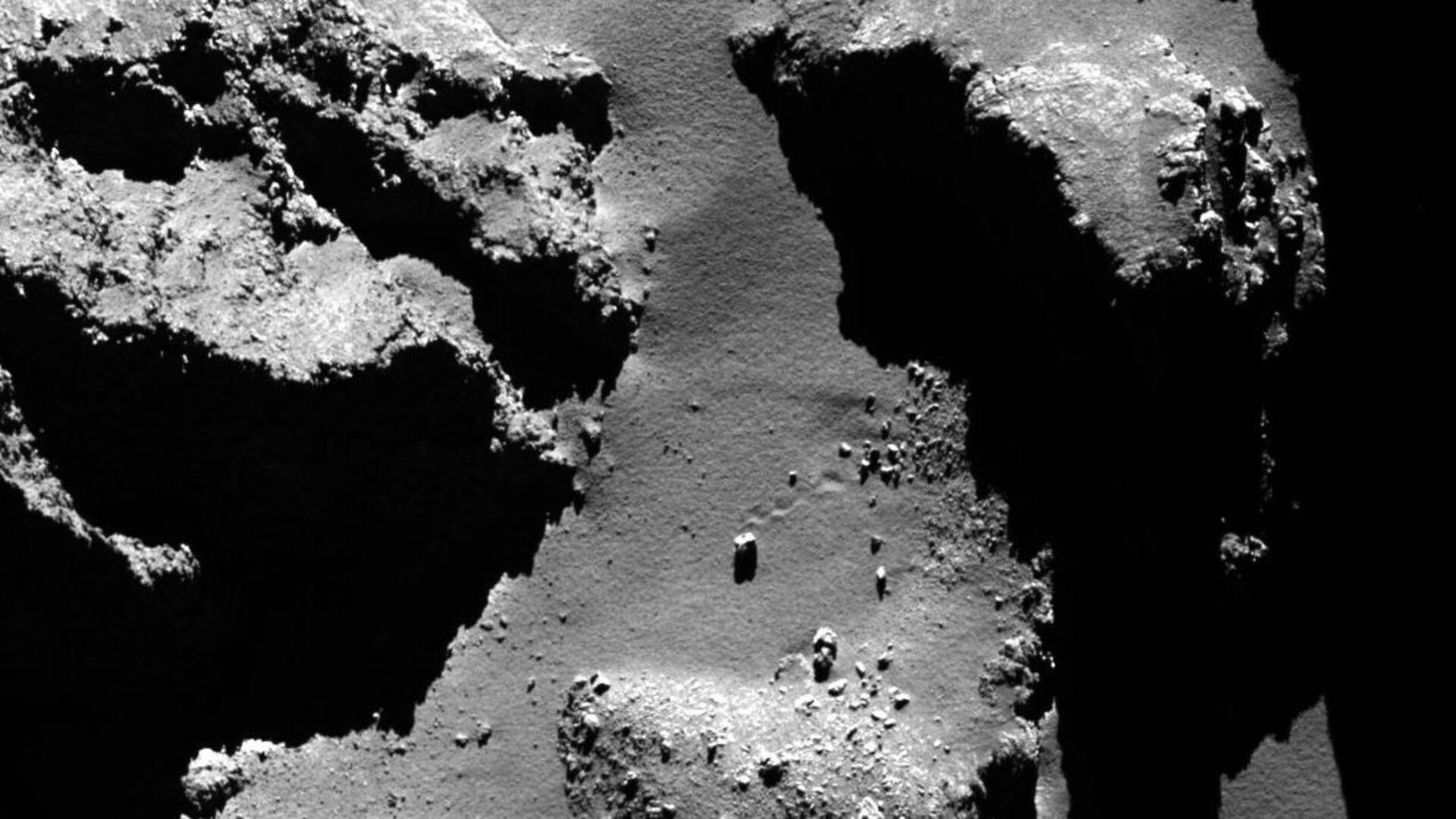 Rosetta operated at Comet 67P/Churyumov-Gerasimenko between August 2014 and September 2016, collecting data on the comet’s dust, gas and plasma environment, its surface characteristics and its interior structure.

As part of the analysis of some 76 000 high-resolution images captured with its OSIRIS camera, scientists have been looking for surface changes. In particular, they are interested in comparing the period of the comet’s closest approach to the Sun – known as perihelion – with that after this most active phase, to better understand the processes that drive surface evolution.

Loose debris is seen all over the comet, but sometimes boulders have been caught in the act of being ejected into space, or rolling across the surface. A new example of a bouncing boulder was recently identified in the smooth neck region that connects the comet’s two lobes, an area that underwent a lot of noticeable large-scale surface changes over the course of the mission. There, a boulder about 10 m-wide has apparently fallen from the nearby cliff, and bounced several times across the surface without breaking, leaving ‘footprints’ in the loosely consolidated surface material.

“We think it fell from the nearby 50 m-high cliff, and is the largest fragment in this landslide, with a mass of about 230 tonnes,” said Jean-Baptiste Vincent of the DLR Institute for Planetary Research, who presented the results at the EPSC-DPS conference in Geneva today.

“So much happened on this comet between May and December 2015 when it was most active, but unfortunately because of this activity we had to keep Rosetta at a safe distance. As such we don’t have a close enough view to see illuminated surfaces with enough resolution to exactly pinpoint the ‘before’ location of the boulder.”

Studying boulder movements like these in different parts of the comet helps determine the mechanical properties of both the falling material, and the surface terrain on which it lands. The comet’s material is in general very weak compared with the ice and rocks we are familiar with on Earth: boulders on Comet 67P/C-G are around one hundred times weaker than freshly packed snow.

Another type of change has also been witnessed in several locations around the comet: the collapse of cliff faces along lines of weakness, such as the dramatic capture of the fall of a 70 m-wide segment of the Aswan cliff observed in July 2015. But Ramy El-Maarry and Graham Driver of Birkbeck, University of London, may have found an even larger collapse event, linked to a bright outburst seen on 12 September 2015 along the northern-southern hemisphere divide.

“This seems to be one of the largest cliff collapses we’ve seen on the comet during Rosetta’s lifetime, with an area of about 2000 square metres collapsing,” said Ramy, also speaking at EPSC-DPS today.

During perihelion passage, the southern hemisphere of the comet was subjected to high solar input, resulting in increased levels of activity and more intensive erosion than elsewhere on the comet.

“Inspection of before and after images allow us to ascertain that the scarp was intact up until at least May 2015, for when we still have high enough resolution images in that region to see it,” says Graham, an undergraduate student working with Ramy to investigate Rosetta’s vast image archive.

“The location in this particularly active region increases the likelihood that the collapsing event is linked to the outburst that occurred in September 2015.”

Looking in detail at the debris around the collapsed region suggests that other large erosion events have happened here in the past. Ramy and Graham found that the debris includes blocks of variable size ranging up to tens of metres, substantially larger than the boulder population following the Aswan cliff collapse, which is mainly comprised of boulders a few metres diameter.

“This variability in the size distribution of the fallen debris suggests either differences in the strength of the comet’s layered materials, and/or varying mechanisms of cliff collapse,” adds Ramy.

Studying comet changes like these not only gives insight into the dynamic nature of these small bodies on short timescales, but the larger scale cliff collapses provide unique views into the internal structure of the comet, helping to piece together the comet’s evolution over longer timescales.

Cliff collapses on Comet 67P/Churyumov-Gerasimenko following outbursts as observed by the Rosetta mission, by M. R. El-Maarry and G. Driver and Bouncing boulders on Comet 67P by J-B. Vincent et al were presented in the Comets, asteroid-comet continuum, and our knowledge after Rosetta session at EPSC-DPS on Wednesday 18 September.

All Rosetta mission data is available in the planetary science archive.