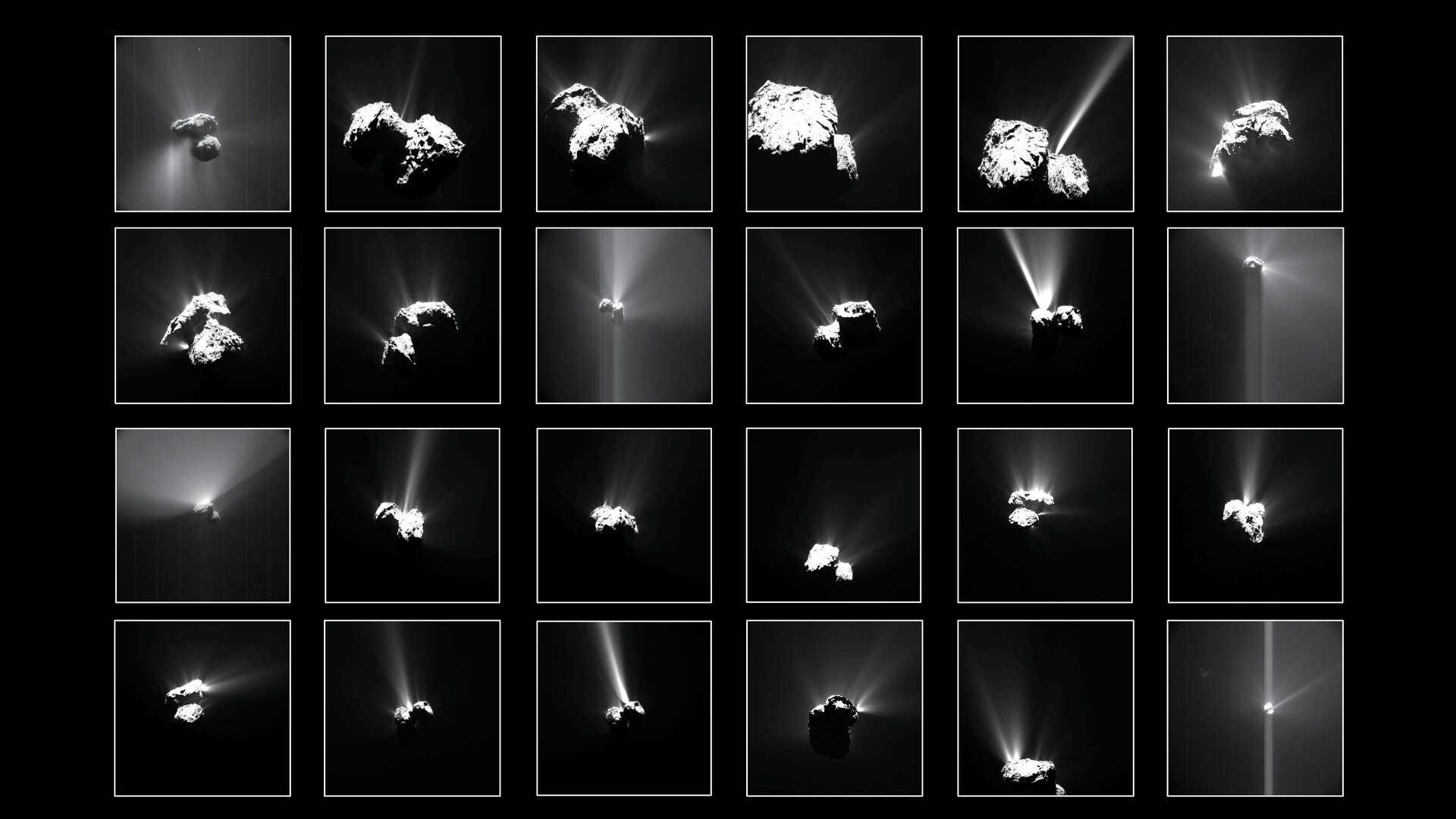 Brief but powerful outbursts seen from Comet 67P/Churyumov–Gerasimenko during its most active period last year have been traced back to their origins on the surface.

In the three months centred around the comet’s closest approach to the Sun, on 13 August 2015, Rosetta’s cameras captured 34 outbursts.

These violent events were over and above regular jets and flows of material seen streaming from the comet’s nucleus. The latter switch on and off with clockwork repeatability from one comet rotation to the next, synchronised with the rise and fall of the Sun’s illumination.

By contrast, outbursts are much brighter than the usual jets – sudden, brief, high-speed releases of dust. They are typically seen only in a single image, indicating that they have a lifetime shorter than interval between images – typically 5–30 minutes.

A typical outburst is thought to release 60–260 tonnes of material in those few minutes.

On average, the outbursts around the closest approach to the Sun occurred once every 30 hours – about 2.4 comet rotations. Based on the appearance of the dust flow, they can be divided into three categories.

One type is associated with a long, narrow jet extending far from the nucleus, while the second involves a broad, wide base that expands more laterally. The third category is a complex hybrid of the other two.

“As any given outburst is short-lived and only captured in one image, we can’t tell whether it was imaged shortly after the outburst started, or later in the process,” notes Jean-Baptiste Vincent, lead author of the paper published today in Monthly Notices of the Astronomical Society.

“As a result, we can’t tell if these three types of plume ‘shapes’ correspond to different mechanisms, or just different stages of a single process.

"But if just one process is involved, then the logical evolutionary sequence is that an initially long narrow jet with dust is ejected at high speed, most likely from a confined space.

"Then, as the local surface around the exit point is modified, a larger fraction of fresh material is exposed, broadening the plume ‘base’.

"Finally, when the source region has been altered so much as not to be able to support the narrow jet anymore, only a broad plume survives.”

The other key question is how these outbursts are triggered.

The team found that just over half of the events occurred in regions corresponding to early morning, as the Sun began warming up the surface after many hours in darkness.

The rapid change in local temperature is thought to trigger thermal stresses in the surface that might lead to a sudden fracturing and exposure of volatile material. This material rapidly heats up and vaporises explosively.

The other events occurred after local noon – after illumination of a few hours.

These outbursts are attributed to a different cause, where the cumulative heat makes its down to pockets of ‘volatiles’ buried beneath the surface, again causing sudden heating and an explosion.

“The fact that we have clear morning and noon outbursts points to at least two different ways of triggering an outburst,” says Jean-Baptiste.

But it is also possible that yet another cause is involved in some outbursts.

“We found that most of the outbursts seem to originate from regional boundaries on the comet, places where there are changes in texture or topography in the local terrain, such as steep cliffs, pits or alcoves,” adds Jean-Baptiste.

Indeed, the fact that boulders or other debris are also seen around the regions identified as the sources of the outbursts confirms that these areas are particularly susceptible to erosion.

While slowly eroding cliff faces are thought to be responsible for some of the regular, long-lived jet features, a weakened cliff edge may also suddenly collapse at any time, night or day. This collapse would reveal substantial amounts of fresh material and could lead to an outburst even when the region is not exposed to sunlight.

At least one of the events studied took place in local darkness and may be linked to cliff collapse.

“Studying the comet over a long period of time has given us the chance to look into the difference between ‘normal’ activity and short-lived outbursts, and how these outbursts may be triggered,” says Matt Taylor, ESA’s Rosetta project scientist.

“Studying how these phenomena vary as the comet progresses along its orbit around the Sun give us new insight into how comets evolve during their lifetimes.”

“Summer fireworks on Comet 67P,” by J.-B. Vincent et al is accepted for publication in Monthly Notices of the Royal Astronomical Society.

This article also uses information from “Are fractured cliffs the source of cometary dust jets? Insights from OSIRIS/Rosetta at 67P,” by J.-B. Vincent et al, published in Astronomy & Astrophysics 2015