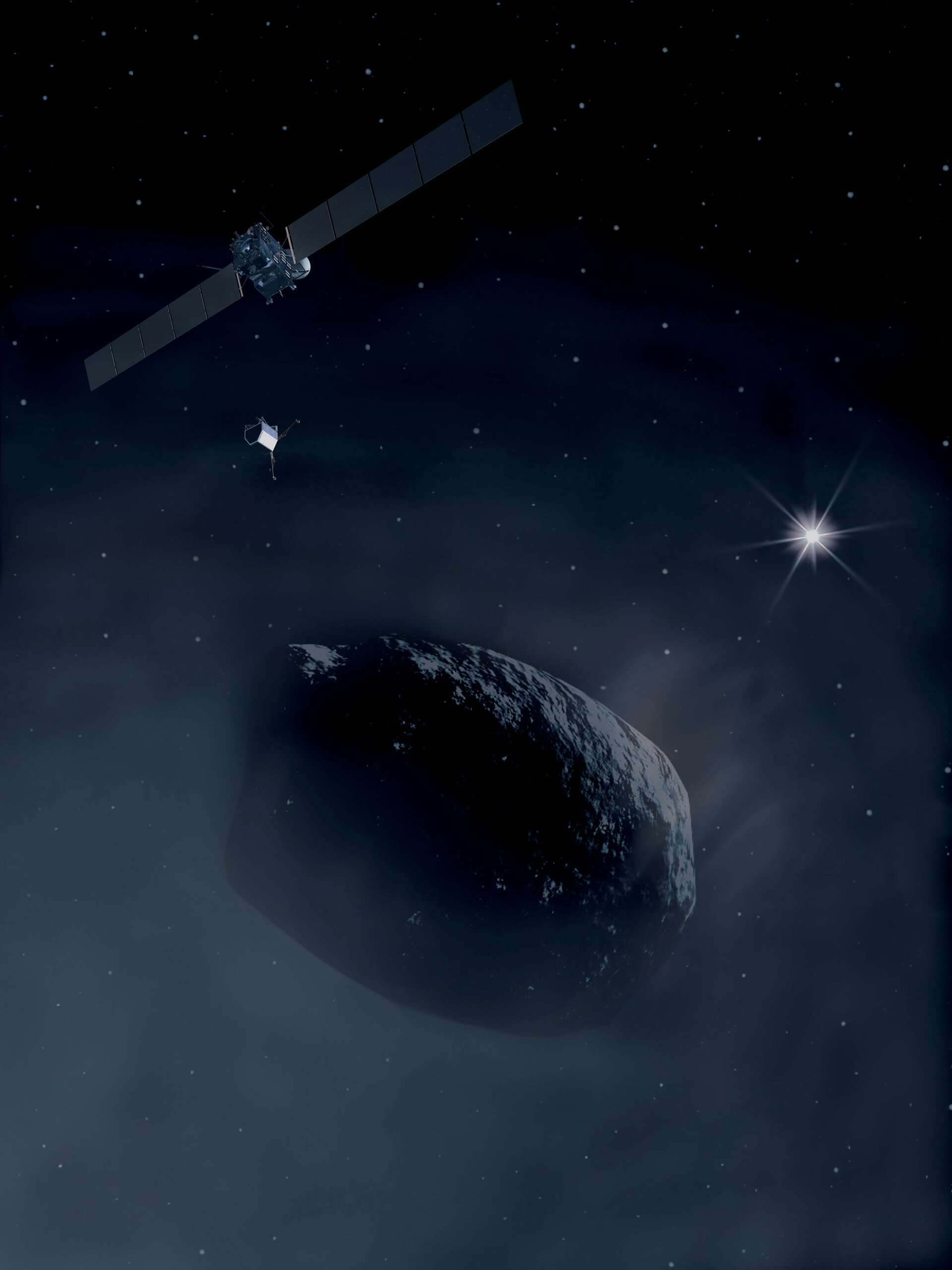 ESA INFO 01-2003. ESA's Rosetta will be the first mission to orbit and land on a comet, one of the icy bodies that travel throughout the Solar System and develop a characteristic tail when they approach the Sun. Rosetta is scheduled to be launched on-board an Ariane-5 rocket in January 2003 from Kourou, French Guiana. A decision on the launch date will be taken by Tuesday 14 January (see Arianespace press release N° 03/02 of 7 January 2003 or at http:www.arianespace.com).

The mission’s target is Comet Wirtanen and the encounter will occur in 2011. Rosetta’s name comes from the famous Rosetta stone, that almost 200 years ago led to the deciphering of Egyptian hieroglyphics. In a similar way, scientists hope that the Rosetta spacecraft will unlock the mysteries of the Solar System.

Comets are very interesting objects for scientists, since their composition reflects how the Solar System was when it was very young and still 'unfinished', more than 4600 million years ago. Comets have not changed much since then. By orbiting Comet Wirtanen and landing on it, Rosetta will collect essential information to understand the origin and evolution of our Solar System. It will also help discover whether comets contributed to the beginnings of life on Earth. In fact comets are carriers of complex organic molecules, that - delivered to Earth through impacts – perhaps played a role in the origin of living forms. Furthermore, 'volatile' light elements carried by comets may have also played an important role in forming the Earth’s oceans and atmopshere.

“Rosetta is one of the most challenging missions ever undertaken so far”, says Prof. David Southwood, ESA's Director of Science, “No one before attempted a similar mission, unique for its scientific implications as well as for its complex and spectacular interplanetary space manoeuvres”.

Before reaching its target in 2011, Rosetta will circle the Sun almost four times on wide loops in the inner Solar System. During its long trek, the spacecraft will have to endure some extreme thermal conditions. Once it is close to Comet Wirtanen, scientists will take it through a delicate braking manoeuvre; then the spacecraft will closely orbit the comet, and gently drop a lander on it. It will be like landing on a small, fast-moving cosmic bullet that still has – at present - an almost unknown 'geography'.

Rosetta is a 3-tonne box-type spacecraft about 3 metres high, with two 14-metre long solar panels. It consists of an Orbiter and a Lander. The Lander is approximately 1 metre across and 80 centimetres high. It will be attached to the side of the Rosetta Orbiter during the journey to Comet Wirtanen. Rosetta carries 21 experiments in total, 10 of them on the Lander. They will be kept in hibernation during most of its 8-year trek towards Wirtanen.

What makes Rosetta's cruise so long? To reach Comet Wirtanen, the spacecraft needs to go out in deep space as far from the Sun as Jupiter. No launcher could possibly get Rosetta there directly. ESA's spacecraft will gather speed from gravitational ‘kicks’ provided by three planetary fly-bys: one of Mars in 2005 and two of Earth in 2005 and 2007. During the trip, Rosetta will also visit two asteroids, Otawara (in 2006) and Siwa (in 2008). During these encounters, scientists will switch on Rosetta's instruments for calibration and scientific studies.

Long trips in deep space include many hazards, such as extreme changes in temperature. Rosetta will leave the benign environment of near-Earth space to the dark, frigid regions beyond the asteroid belt. To manage these thermal loads, experts have done very tough pre-launch tests to study Rosetta's endurance. For example, they have heated its external surfaces to more than 150°C, then quickly cooled it to -180°C in the next test.

The spacecraft will be fully reactivated prior to the comet rendezvous manoeuvre in 2011. Then, Rosetta will orbit the comet – an object only 1.2 km wide - while it cruises through the inner Solar System at 135 000 kilometres per hour. At the time of the rendezvous – around 675 million km from the Sun – Wirtanen will hardly show any surface activity. It means that the characteristic coma (the comet’s ‘atmosphere’) and the tail will not be formed yet, because of the large distance from the Sun. The comet's tail is in fact made of dust grains and frozen gases from the comet's surface that vapourise because of the Sun's heat.

For six months Rosetta will extensively map the comet surface, prior to selecting a landing site. In July 2012, the Lander will self-eject from the spacecraft from a height of just one kilometre. Touchdown will take place at walking speed - less than 1 metre per second. Immediately after touchdown, the Lander will fire a harpoon into the ground to avoid bouncing off the surface back into space, since the extremely weak comet’s gravity alone would not hold onto the lander. Operations and scientific observations on the comet surface will last 65 hours as a minimum, but may continue for many months.

During and after the lander operations, Rosetta will continue orbiting and studying the comet. Rosetta will be the first spacecraft to witness at close quarters the changes taking place in a comet when the comet approaches the Sun and grows its coma and tail. The trip will end in July 2013, after 10.5 years of adventure, when the comet is closest to the Sun.

Studying a comet on the spot

Rosetta's goal is to examine the comet in great detail. The instruments on the Rosetta Orbiter include several cameras, spectrometers, and experiments that work at different wavelengths - infrared, ultraviolet, microwave, radio - and a number of sensors. They will provide, among other things, very high-resolution images and information about the shape, density, temperature, and chemical composition of the comet. Rosetta’s instruments will analyse the gases and dust grains in the so-called 'coma''that forms when the comet becomes active, as well as the interaction with the solar wind.

The 10 instruments on board the Lander will do an on-the-spot analysis of the composition and structure of the comet’s surface and subsurface material. A drilling system will take samples down to 30 centimetres below the surface and will feed these to the ‘composition analysers’. Other instruments will measure properties such as near-surface strength, density, texture, porosity, ice phases, and thermal properties. Microscopic studies of individual grains will tell us about the texture.

In addition, instruments on the Lander will study how the comet changes during the day-night cycle, and while it approaches the Sun.

Data from the Lander are relayed to the orbiter, which stores them for downlink to Earth at the next ground station contact. ESA has installed a new deep-space antenna at New Norcia, near Perth in Western Australia, as the main communications link between the spacecraft and the ESOC Mission Control in Darmstadt, Germany. This 35-metre diameter parabolic antenna allows the radio signal to reach distances of more than 1 million kilometres from Earth. The radio signals, travelling at the speed of light, will take up to 50 minutes to cover the distance between the spacecraft and Earth.

Rosetta's Science Operations Centre, which is responsible for collecting and distributing the scientific data, will share a location at ESOC and ESTEC in Noordwijk, The Netherlands. The Lander Control Centre is located in DLR in Cologne, Germany, and the Lander Science Centre in CNES in Toulouse, France.

Rosetta was selected as a mission in 1993. The spacecraft has been built by Astrium Germany as prime contractor. Major subcontractors are Astrium UK (spacecraft platform), Astrium France (spacecraft avionics), and Alenia Spazio (assembly, integration, and verification). Rosetta’s industrial team involves more than 50 contractors from 14 European countries, Canada and the United States.

Scientific consortia from institutes across Europe and the United States have provided the instruments on the Orbiter. A European consortium under the leadership of the German Aerospace Research Institute (DLR) has provided the Lander. Rosetta has cost ESA Euro 701 million at 2000 economic conditions. This amount includes the launch and the entire period of development and mission operations from 1996 to 2013. The lander and the experiments, the so-called 'payload', are not included since they are funded by ESA's Member States through the scientific institutes.

Europe is certainly a pioneer in comet exploration. In 1986, ESA’s spacecraft Giotto performed the closest comet fly-by ever achieved by any spacecraft (at a distance of 600 kilometres of Halley). It sent back wonderful pictures and data that showed that comets contain complex organic molecules. These kinds of compounds are rich in carbon, hydrogen, oxygen, and nitrogen. Intriguingly, these are the elements which make up nucleic acids and amino acids, which are essential ingredients for life as we know it. Giotto continued its successful journey and flew by Comet Grigg-Skjellerup in 1992 within about 200 km distance. Now scientists will be eagerly waiting to be able to answer some of the new intriguing questions that arose from analysing the exciting results from Giotto.

Other past missions that have flown by a comet were: NASA’s ICE mission in 1985, the two Russian VEGA spacecraft and the two Japanese spacecraft Suisei and Sakigake that were part of the armada that visited comet Halley in 1986; NASA’s Deep Space 1 flew-by comet Borelly in 2001 and NASA’s Stardust will fly-by comet Wild 2 in early 2004 and will return samples of the comet’s coma in 2006. Unfortunately NASA’s Contour launched in Summer 2002 failed when it was inserted onto its interplanetary trajectory. In 2004 we will see the launch of Deep Impact, a spacecraft that will shoot a massive block of copper into a comet nucleus.

For more information on the Rosetta mission and the launch activities visit the ESA web pages at: http://www.esa.int/rosettalaunch

For more information on the ESA Science Programme visit: http://sci.esa.int