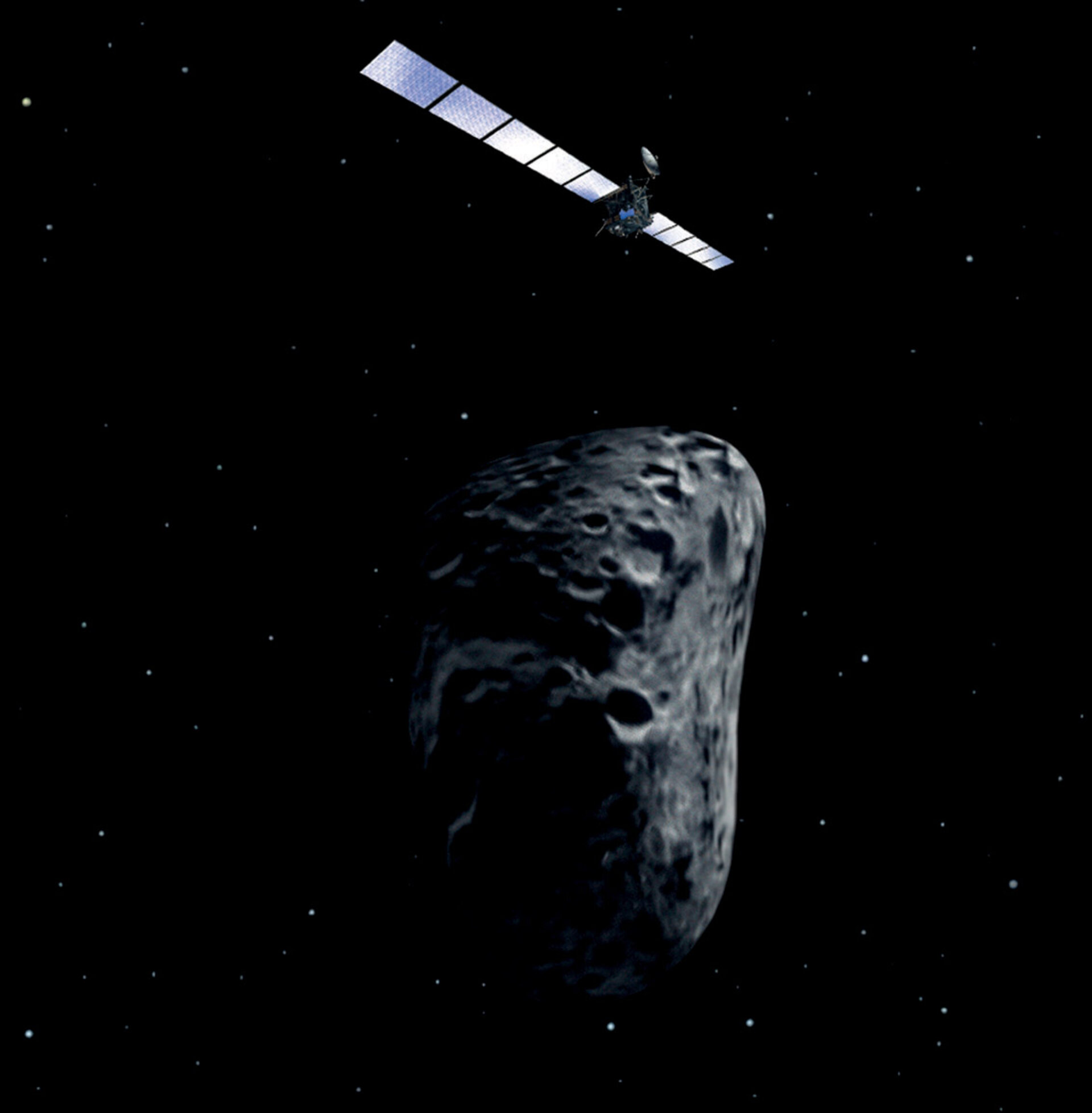 Spacecraft controllers have just awoken Rosetta from hibernation to prepare for its encounter with asteroid (2867) Steins on 5 September. ESA’s comet chaser will study the relatively rare asteroid as it flies by on its way to Comet 67P/Churyumov-Gerasimenko.

Launched in March 2004, Rosetta will reach its final destination only in 2014, after travelling a total of about 6500 million km. The distance between the spacecraft and the Sun as it approaches the comet will be about 600 million or 4 AU (1 AU or 1 Astronomical Unit is equal to 150 million km, the mean distance between Earth and the Sun).

Rosetta has swung by Earth twice and Mars once, performing gravity-assist manoeuvres, that gave it the necessary boost to continue on its journey. The third and last Earth swing-by is scheduled for November 2009. The spacecraft will also fly by two asteroids and study them on the way: (2867) Steins in September this year and (21) Lutetia in June 2010. As it closes in on (2867) Steins in September, Rosetta will have travelled about 3700 million km and will be 2.1 AU from the Sun.

After its last planetary swing-by on 13 November last year, Rosetta headed towards the asteroid belt located between the orbits of Mars and Jupiter. On 27 March 2008, the spacecraft switched to its near-Sun hibernation mode for a period of three months. During this phase, a few subsystems were put into a dormant state to optimise their lifetime (as this is only the beginning of the mission’s science phase).

In preparation for the fly-by, all the instruments will be checked and tested through the month of July. Between 4 August and 4 September, spacecraft operators will conduct an optical navigation campaign: Steins will be tracked by the on-board cameras and the observations will be used to refine the knowledge of its orbit which has been derived only from ground-based measurements so far.

Asteroids are samples of the Solar System’s material at different stages of evolution, and studying them helps scientists understand the origin and evolution of Earth and of our planetary neighbourhood.

(2867) Steins is a relatively rare type of asteroid. Based on ground-based observations it has been classified as an E-type asteroid, composed mainly of silicates and basalts, but its properties are not known in detail. For these reasons, it has been selected as one of the two asteroids that Rosetta will study, from among those that were within reach of the mission. The knowledge gained from the measurements will add to our knowledge of the composition and evolution of E-type asteroids and will also supplement and help interpret future ground-based data on asteroids.

Making most of the fly-by

The observations will be used to characterise the asteroid and its environment and to test Rosetta’s instruments, most of which will be active during the fly-by.

The science objectives of the fly-by observations are as follows:

The fly-by will push Rosetta to its design limits, especially owing to the fast rotation of the spacecraft around the time of closest approach. The manoeuvre is necessary to ensure that the asteroid will stay in the field of view of the instruments. In view of this, a full in-flight simulation of the fly-by was performed on 24 March 2008. The tests were successful, confirming the spacecraft’s robustness.