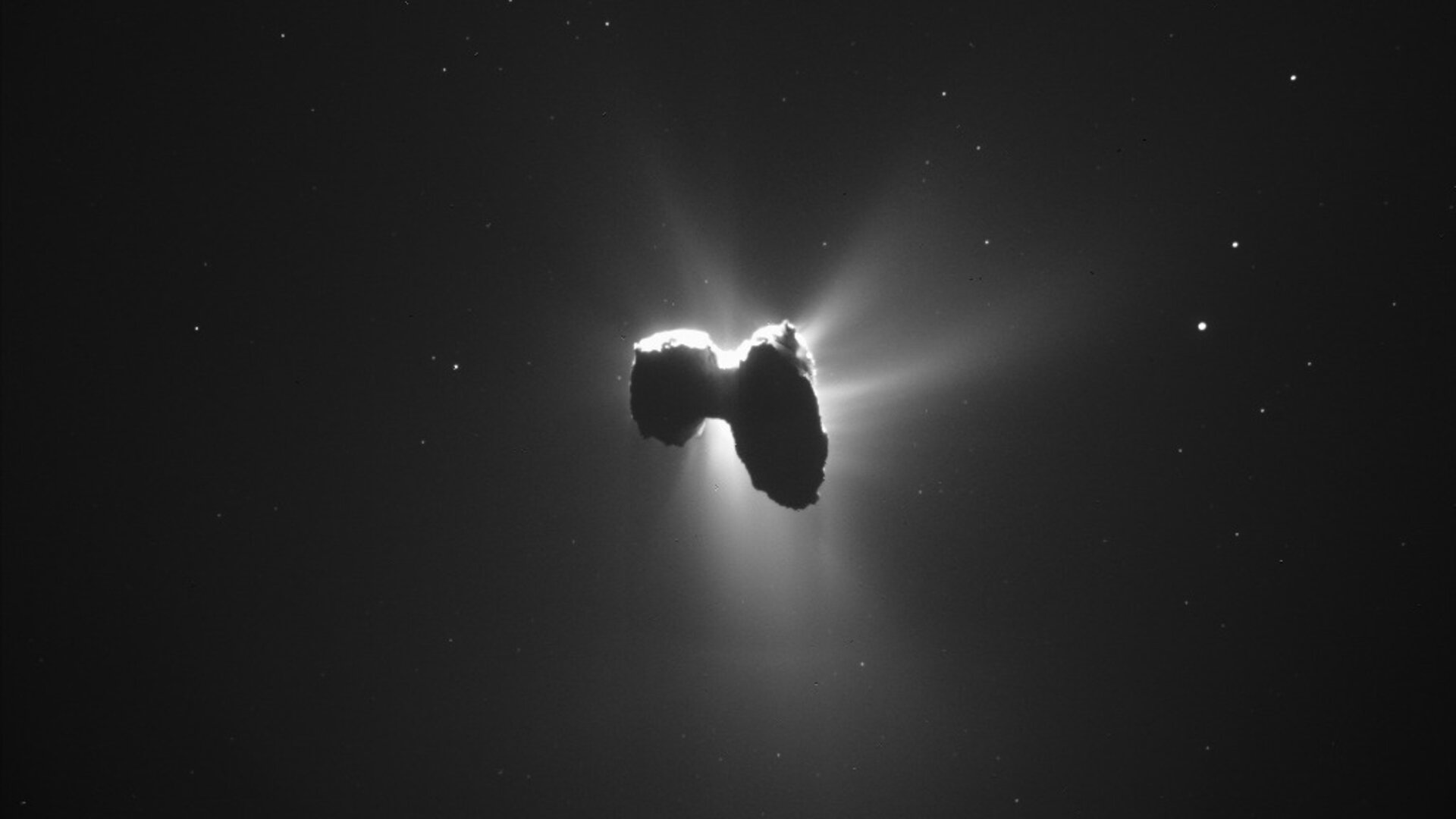 Feeling stressed? You’re not alone. ESA’s Rosetta mission has revealed that geological stress arising from the shape of Comet 67P/Churyumov–Gerasimenko has been a key process in sculpting the comet's surface and interior following its formation.

Small, icy comets with two distinct lobes seem to be commonplace in the Solar System, with one possible mode of formation a slow collision of two primordial objects in the early stages of formation some 4.5 billion years ago. A new study using data collected by Rosetta during its two years at Comet 67P/C-G has illuminated the mechanisms that contributed to shaping the comet over the following billions of years.

“We found networks of faults and fractures penetrating 500 metres underground, and stretching out for hundreds of metres,” says lead author Christophe Matonti of Aix-Marseille University, France.

“These geological features were created by shear stress, a mechanical force often seen at play in earthquakes or glaciers on Earth and other terrestrial planets, when two bodies or blocks push and move along one another in different directions. This is hugely exciting: it reveals much about the comet’s shape, internal structure, and how it has changed and evolved over time.”

The model developed by the researchers found shear stress to peak at the centre of the comet’s ‘neck’, the thinnest part of the comet connecting the two lobes.

“It’s as if the material in each hemisphere is pulling and moving apart, contorting the middle part – the neck – and thinning it via the resulting mechanical erosion,” explains co-author Olivier Groussin, also of Aix-Marseille University, France.

“We think this effect originally came about because of the comet’s rotation combined with its initial asymmetric shape. A torque formed where the neck and ‘head’ meet as these protruding elements twist around the comet’s centre of gravity.”

The observations suggest that the shear stress acted globally over the comet and, crucially, around its neck. The fact that fractures could propagate so deeply into 67P/C-G also confirms that the material making up the interior of the comet is brittle, something that was previously unclear.

"None of our observations can be explained by thermal processes,” adds co-author Nick Attree of the University of Stirling, UK. “They only make sense when we consider a shear stress acting over the entire comet and especially around its neck, deforming and damaging and fracturing it over billions of years.”

Sublimation, the process of ices turning to vapour and resulting in comet dust being dragged out into space, is another well-known process that can influence a comet’s appearance over time. In particular, when a comet passes closer to the Sun, it warms up and loses its ices more rapidly – perhaps best visualised in some of the dramatic outbursts captured by Rosetta during its time at Comet 67P/C–G.

The new results shed light on how dual-lobe comets have evolved over time.

Comets are thought to have formed in the earliest days of the Solar System, and are stored in vast clouds at its outer edges before beginning their journey inwards. It would have been during this initial ‘building’ phase of the Solar System that 67P/C-G got its initial shape.

The new study indicates that, even at large distances from the Sun, shear stress would then act over a timescale of billions of years following formation, while sublimation erosion takes over on shorter million-year timescales to continue shaping the comet’s structure – especially in the neck region that was already weakened by shear stress.

Excitingly, NASA’s New Horizons probe recently returned images from its flyby of Ultima Thule, a trans-Neptunian object located in the Kuiper belt, a reservoir of comets and other minor bodies at the outskirts of the Solar System.

The data revealed that this object also has a dual-lobed shape, even though somewhat flattened with respect to Rosetta’s comet.

“The similarities in shape are promising, but the same stress structures don’t seem to be apparent in Ultima Thule,” comments Christophe.

As more detailed images are returned and analysed, time will tell if it has experienced a similar history to 67P/C-G or not.

“Comets are crucial tools for learning more about the formation and evolution of the Solar System,” says Matt Taylor, ESA’s Rosetta Project Scientist.

“We’ve only explored a handful of comets with spacecraft, and 67P is by far the one we’ve seen in most detail. Rosetta is revealing so much about these mysterious icy visitors and with the latest result we can study the outer edges and earliest days of the Solar System in a way we’ve never been able to do before.”

Rosetta is an ESA mission. It launched in 2004 and rendezvoused with Comet 67P/Churyumov–Gerasimenko in 2014 to study it close up as it orbited around the Sun. It also deployed the lander Philae onto the comet’s surface. Rosetta completed its mission by descending to the comet on 30 September 2016.