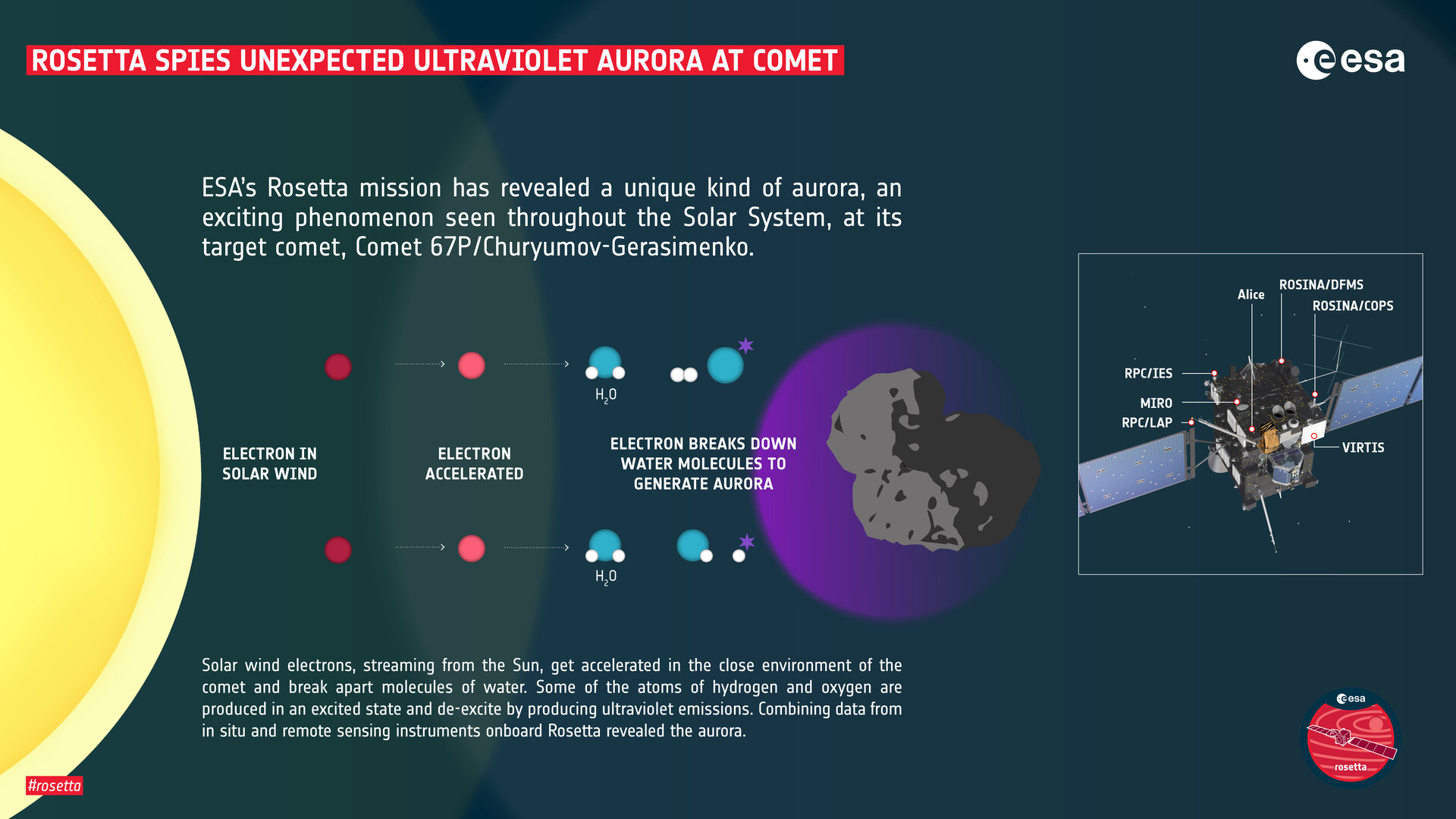 ESA’s Rosetta mission has revealed a unique kind of aurora, an exciting phenomenon seen throughout the Solar System, at its target comet, Comet 67P/Churyumov-Gerasimenko.

At Earth, auroras form as charged particles from the Sun interact with our planet’s magnetic field to create shimmering displays of colour and light in the high-latitude sky. While these light displays have been seen at various planets and moons in the Solar System, and around a more distant star, observations from ESA’s comet-chasing Rosetta mission now reveal unique auroral emissions at the spacecraft’s target comet: 67P/Churyumov-Gerasimenko (67P/C-G).

These emissions are created as charged particles stream towards the comet from the Sun – a flow known as the solar wind – and interact with the gas surrounding the comet’s icy, dusty nucleus.

“The glow surrounding 67P/C-G is one of a kind,” says Marina Galand of Imperial College London, UK, lead author of the new study. “By digging into data from numerous instruments on Rosetta and linking them together, we’ve discovered that this glow is auroral in nature: it’s caused by a mix of processes, some seen at Jupiter's moons Ganymede and Europa and others at Earth and Mars.”

These processes define how the envelope of gas (or coma) around 67P/C-G becomes excited – that is, made to glow – and how the particles causing this excitation are given a boost of energy and sped up. 67P/C-G's aurora shows up in ultraviolet light, as seen in martian auroras detected by ESA’s Mars Express (although the ‘colours' of the auroras at 67P/C-G and Mars differ).

To reveal more than what one instrument can offer, Marina and colleagues connected various measurements made by Rosetta, both in situ and remote-sensing, using a physics-based model.

“By doing this, we didn’t have to rely upon just a single dataset from one instrument,” says Marina. “Instead, we could draw together a large, multi-instrument dataset to get a better picture of what was going on. This enabled us to unambiguously identify how 67P/C-G’s ultraviolet atomic emissions form, and to reveal their auroral nature.” 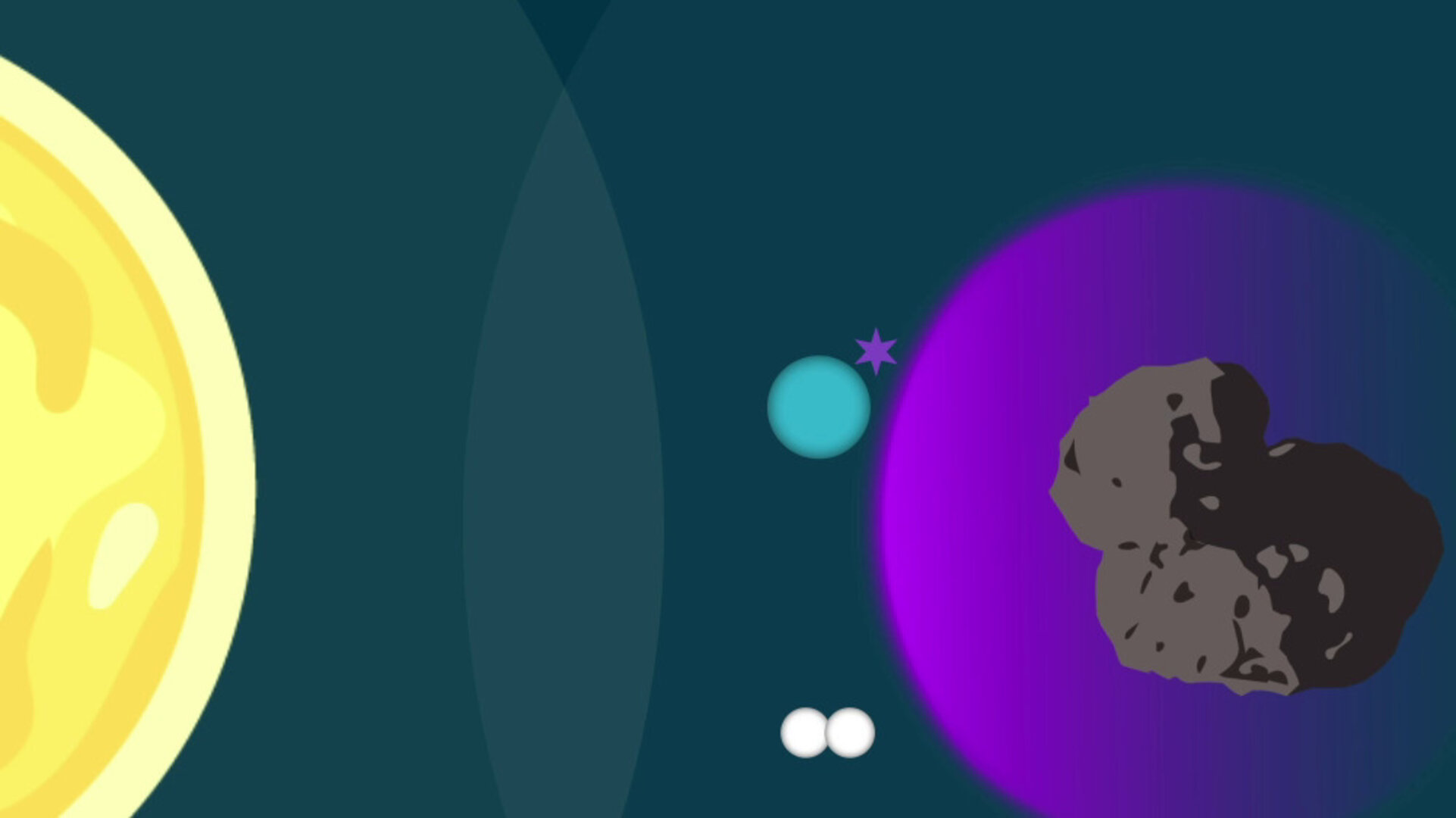 The ultraviolet emissions Rosetta observed at comet 67P/C-G have shown up before, and were thought to be ‘dayglow’, a process caused by solar light particles (photons) interacting with cometary gas.

However, this study shows that these emissions are aurora instead: they are driven not by photons, but by electrons in the solar wind that have been accelerated in the comet’s nearby environment. “These electrons then interact with molecules in the coma to produce the auroral glow. The process by which the electrons are accelerated is similar to some of the processes that drive auroras at Earth and Mars, despite 67P/C-G lacking an intrinsic magnetic field,” adds Marina. "In fact, the magnetic environments of moons, planets, and comets are all very different, so it's exciting and intriguing that we see auroras at all of them.”

Exploring the emission at 67P/C-G will enable scientists to assess how the particles comprising the solar wind change over time, something that is crucial for understanding space weather throughout the Solar System. It also confirms that ultraviolet auroras can occur at comets, and brings insight into how these exciting, and often spectacular, light shows form at different Solar System objects.

Following its rendezvous with 67P/C-G in 2014, Rosetta has provided a wealth of data that has underpinned our exploration of how the Sun and solar wind interact with comets. The spacecraft was the first to orbit a comet’s nucleus, the first to fly alongside a comet as it travelled into the inner Solar System, the first to dispatch a robotic lander to a cometary nucleus, and the first to image a cometary surface at such a high spatial resolution.

“And now, it’s the first to spot an ultraviolet aurora at a comet! Auroras are inherently exciting – and this excitement is even greater when we see one somewhere new, or with new characteristics,” adds ESA’s Rosetta project scientists Matt Taylor.

“This multi-instrument analysis brings together more pieces of the puzzle in our understanding of both auroras throughout the Solar System, and of the various phenomena we see around comets.

“It uses data from numerous instruments aboard Rosetta, and is a great example of why we fly several different instruments, with different goals and techniques and areas of focus, on any given mission: to get a full picture of the objects and processes going on in our cosmic environment.”