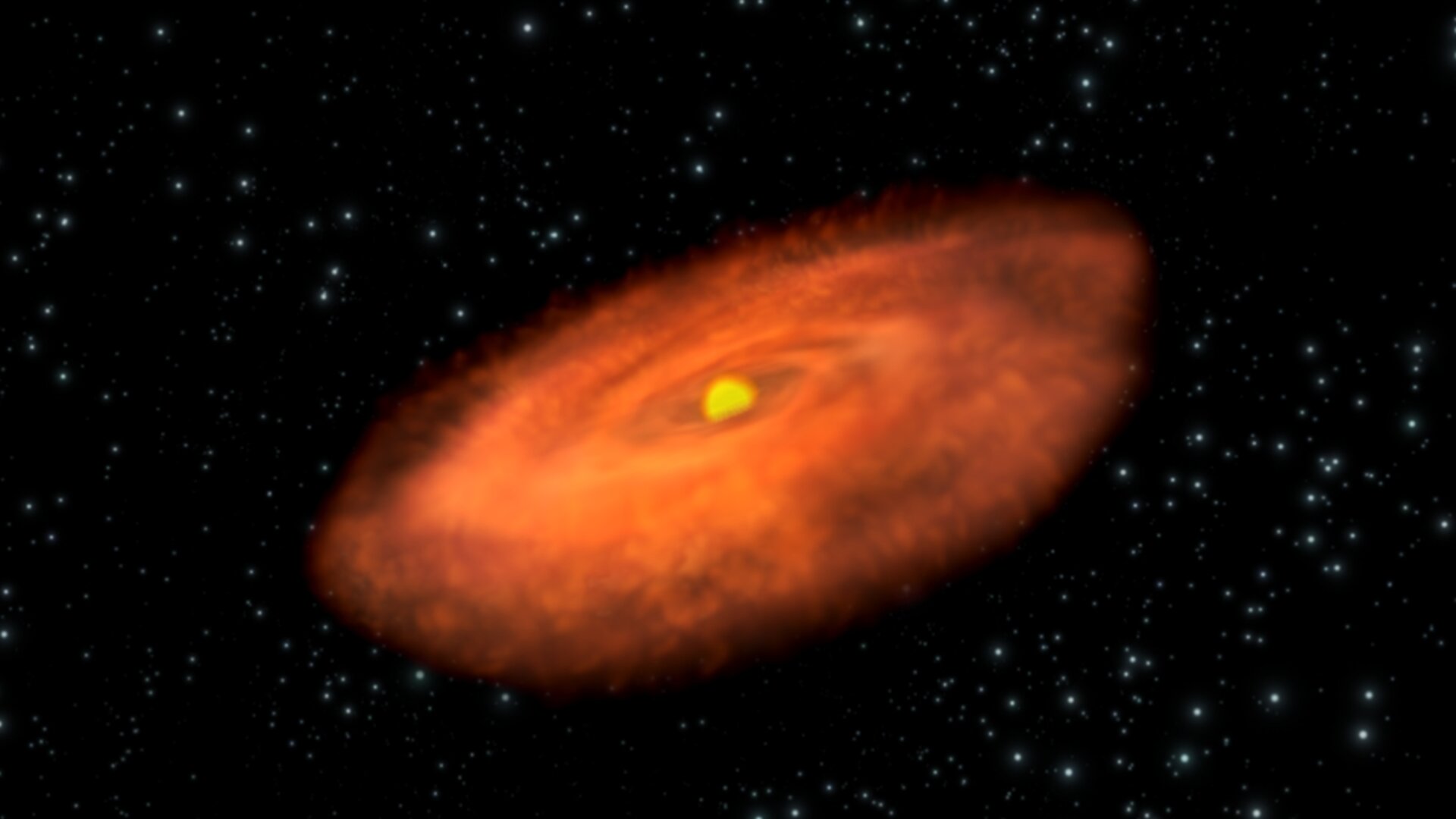 Using the unique capabilities of ESA’s Herschel space observatory, astronomers have accurately ‘weighed’ a star’s disc, finding it still has enough mass to spawn 50 Jupiter-sized planets, several million years after most other stars have already given birth.

Proto-planetary discs contain all the raw ingredients for building planets. They are composed mainly of cold molecular hydrogen gas, which is highly transparent and essentially invisible.

Usually, it is much easier to measure the emission from ‘contaminants’ such as the small fraction of dust mixed in the gas, or other gas constituents, to make estimates of the total disc mass.

Since the ratio of ‘normal’ and ‘heavy’ molecular hydrogen gas is extremely well known from measurements in our local solar neighbourhood, this approach provides a means to ‘weigh’ a star’s total disc mass with ten times higher accuracy than ever before.

Using this technique, a substantial mass of gas was detected in a disc encircling TW Hydrae, a young star just 176 light-years away in the constellation of Hydra.

“We did not expect to find so much gas around this 10-million-year-old star,” says Professor Edwin Bergin of the University of Michigan, lead author of the report published in Nature.

“This star has significantly more mass than required to make our own Solar System and could make a much more exotic system with planets more massive than Jupiter.”

Observing such a massive disc around TW Hydrae is unusual for stars of this age because, within a few million years, most material is typically incorporated into the central star or giant planets, or has been swept away by its strong stellar wind.

“With a more refined mass, we can learn more about this system in terms of its planet-bearing potential and the availability of ingredients that might be able to support a planet with life,” adds Professor Bergin.

Indeed, in a separate Herschel survey, scientists had already identified TW Hydrae as a star with a disc that contains enough water to fill the equivalent of several thousand Earth oceans.

The new method of ‘weighing’ a disc means that the volume of materials available – including water – could have been underestimated, in this system and in others.

A re-evaluation of the masses of discs around other stars of varying ages will provide more insight into the planet-building process.

“There may be different outcomes regarding planet formation for systems of varying ages,” says co-author Professor Thomas Henning of the Max Planck Institute for Astronomy, Germany.

“Just as the ages at which people have children span a range, TW Hydrae seems to lie at the edge of that range for stars, showing that this particular system may have needed longer to form planets, and that it might be a late parent.”

“The detection of heavy molecular hydrogen was made possible thanks to the new observing capabilities offered by Herschel, providing this leap forward in weighing the disc around this star,” adds Göran Pilbratt, ESA’s Herschel project scientist.

“An old disk that can still form a planetary system,” by E. Bergin et al, is published in Nature, 31 January 2013.

The survey was conducted as part of an open time Herschel Programme using the Photoconductor Array Camera and Spectrometer (PACS), which operates in the wavelength range 55–210 microns.

Herschel is an ESA space observatory with science instruments provided by European-led Principal Investigator consortia and with important participation from NASA. PACS was designed and built by a nationally funded consortium led by the Max Planck Institute for Extraterrestrial Physics (Garching, Germany); the consortium includes institutes from Belgium, Austria, France, Italy and Spain.