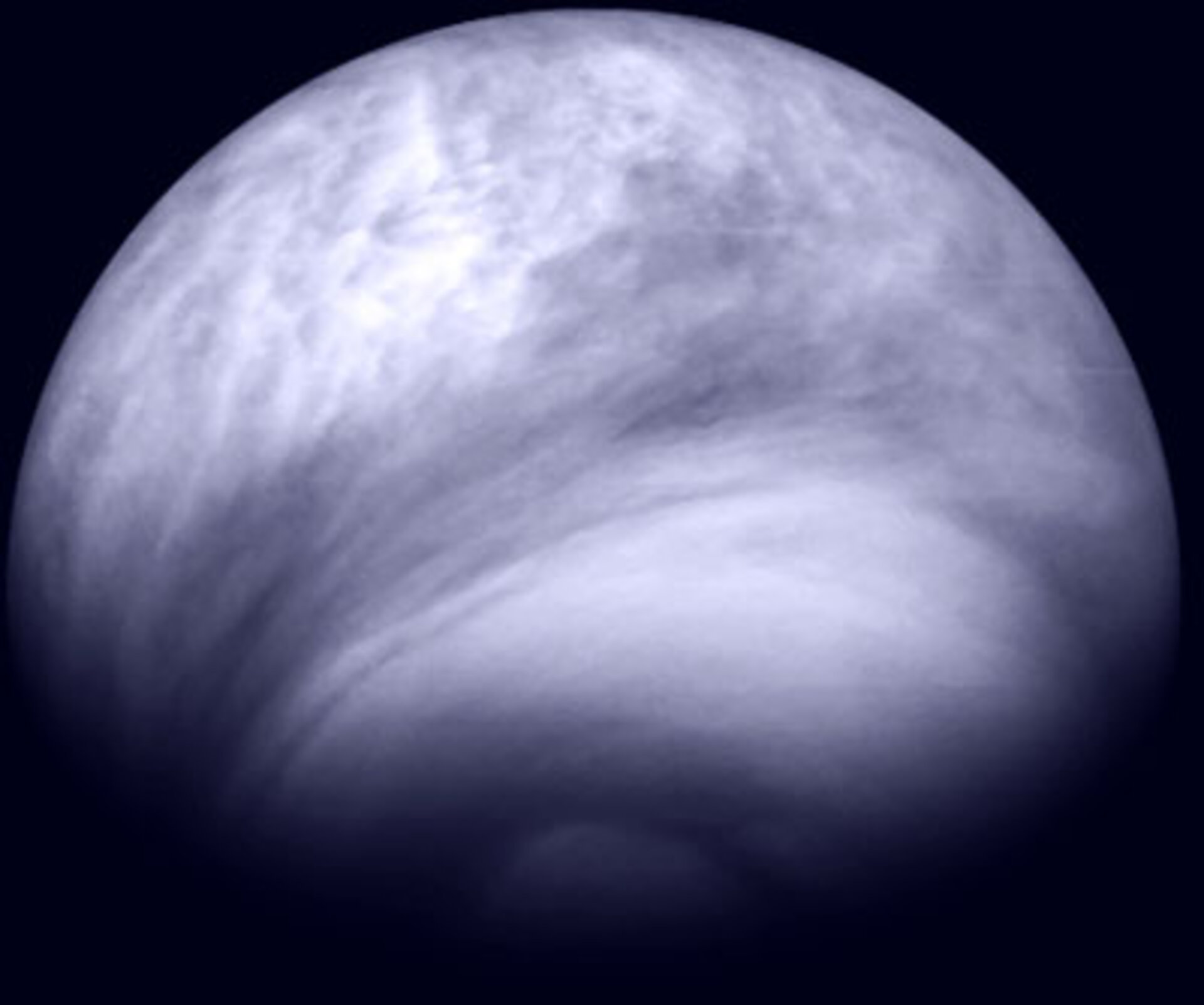 As ESA's Venus Express orbits our sister planet, new images of the cloud structure of one of the most enigmatic atmospheres of the Solar System reveal brand-new details.

Venus is covered by a thick layer of clouds that extends between 45 and 70 km above the surface. These rapidly-moving clouds are mainly composed of micron-sized droplets of sulphuric acid and other aerosols (fine solid or liquid droplets suspended in a gas), the origin of which is unknown.

Earlier missions have shown that the clouds resemble Earth's light fogs, but their thickness creates an impenetrable veil.

The first image presented here (top of the article) is a global view of the southern hemisphere of Venus, obtained from a distance of 30 000 km. The south pole is at the bottom, while equator is at the top.

The appearance of the cloud veil changes dramatically from the equator to the pole. At low latitudes, the shapes are spotty and fragmented. This is indicative of vigorous, convective movement – like that of boiling water in a pot – powered by the radiation of the sun heating the clouds and the atmosphere itself. The bright lace visible on top of the darker cloud deck is made of freshly formed droplets of sulphuric acid.

At mid latitudes, the scene changes – convective patterns give way to more streaky clouds indicating that convection is weaker here, as the amount of sunlight absorbed by the atmosphere decreases.

At high latitudes, the cloud structure changes again. Here it appears as a dense, almost featureless haze forming a kind of polar cap or 'hood' on Venus. The dark, circular feature visible at the lower edge of the image is one of the dark streaks usually present in the polar region, indicating atmospheric parcels spiralling around and towards the pole.

Additional images provide close-up views of the structures described above and show details never seen before. This is possible thanks to the elongated orbit of Venus Express, which allows imaging of the same phenomena from decreasing distances.

The second and third images zoom-in on the equatorial region, showing details of the cloud top and of the bright lace of sulphuric acid, from 20 000 and 15 000 km respectively.

The fourth image from the top is a close-up on the transition region between the equatorial regions dominated by convection and the mid-latitudes populated by streaky clouds. This region is located at about 40-50 degrees latitude and was imaged from a distance of about 15 000 km. The way the transition between structures and dynamics so different from each other occurs, is one of the outstanding enigmas in our understanding Venus.

The second-last image, obtained from a distance of about 20 000 km, is a zoom-in on the south polar 'hood', located inside a 60-degree-latitude circle. This region varies greatly on time scales of days.

In this particular case it is very bright and uniform and lacks small-scale markings. However several global dark streaks visible here usually cross the polar regions and seem to indicate strong 'jet' winds.

The last image, a mosaic composed of 40 single ultraviolet images, covers latitudes from the equator (bottom) to the northern polar regions (top).

The transition from mottled clouds in low latitudes to streaky patterns at mid-latitudes is quite similar to that observed in the southern hemisphere. This suggests a global north-south symmetry of the overall cloud structure at Venus.