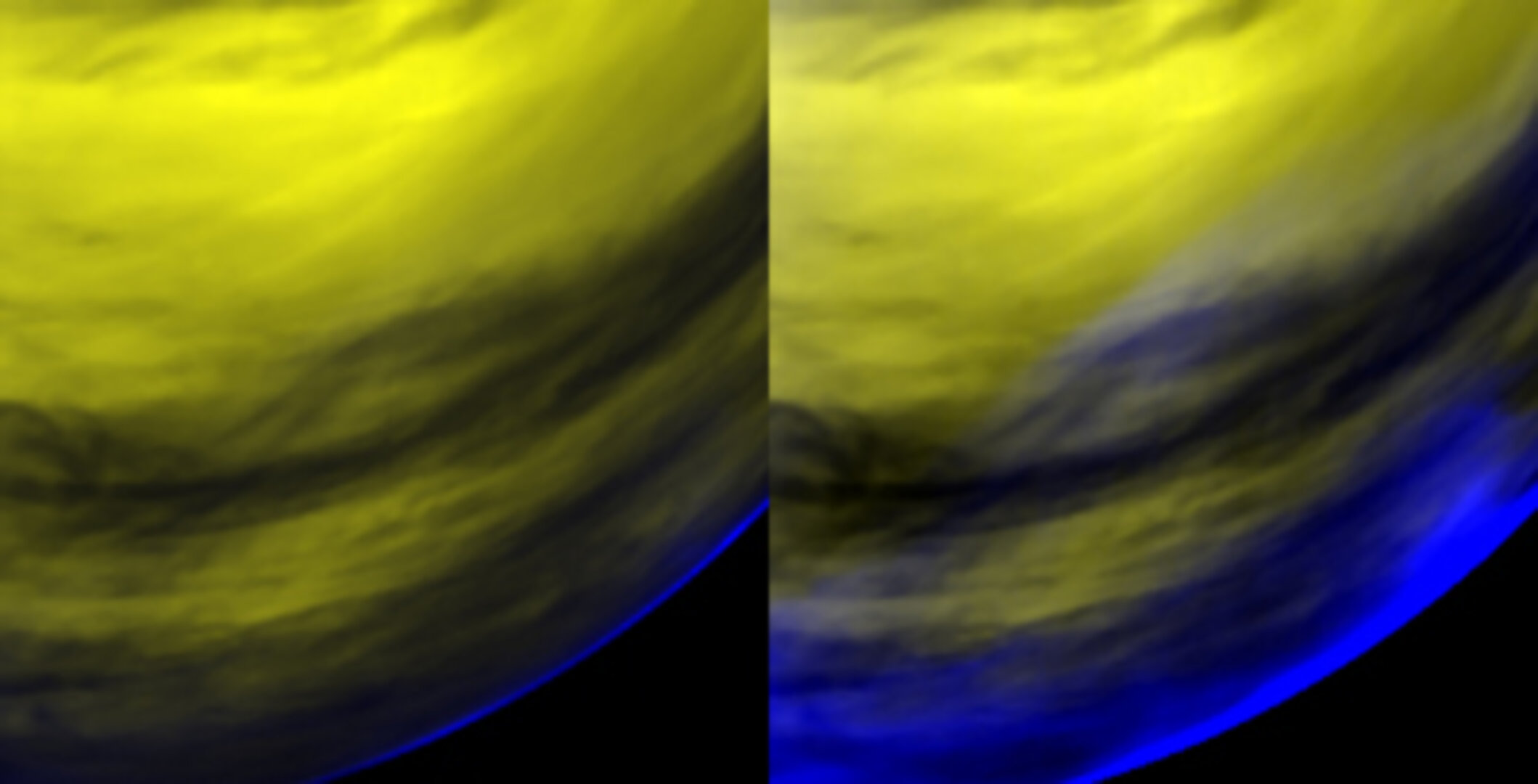 One year has passed since Venus Express, Europe’s first mission to Venus and the only spacecraft now in orbit around the planet, reached its destination. Since then, this advanced probe, born to explore one of the most mysterious planetary bodies in the Solar System, has been revealing planetary details never caught before.

Intensively visited by several Russian and American probes from the 1960s to the early 1990s, Venus has always represented a puzzling target for scientists worldwide to observe. Venus Express, designed and built in record time by ESA, was conceived with the purpose of studying Venus - unvisited since 1994 - in the most comprehensive and systematic way ever, to provide a long-due tribute to a planet so interesting, yet cryptic.

Using state-of-the-art instrumentation, Venus Express is approaching the study of Venus on a global scale. The space probe is collecting information about Venus’ noxious and restless atmosphere (including its clouds and high-speed winds, as seen from this video obtained with the VMC camera on board) and its interaction with the solar wind and the interplanetary environment. Last but not least, it is looking for signs of surface activity, such as active volcanism.

“During one year of observations, we have already collected huge amount of data, which is exactly what we need to decode the secrets of an atmosphere as complex as that of Venus,” said Håkan Svedhem, Venus Express Project Scientist at ESA. “Analysing it is an extreme effort for all science teams, but it is definitively paying back in terms of results.”

The first ever, terrific global views of the double-eyed vortex at Venus’ south pole, the first sets of 3D data about the structure and the dynamics of the sulphuric-acid clouds surrounding the planet in a thick curtain, temperature maps of the surface and the atmosphere at different altitudes, are only a few of the results obtained so far.

“Continuing at today’s rate, and on the basis of what we were able to see so far, there is no doubt that Venus Express will eventually allow a better global understanding of this planet,” continued Svedhem. “Not only will planetary science in general benefit from this, but also understanding Venus – its climate and atmospheric dynamics –will provide a better comprehension of the mechanisms that drive long-term climate evolution on our own Earth.”

The night-glowing ‘lantern’ of Venus

New infrared data is now available about Venus’ oxygen airglow – a phenomenon detectable on the night-side that makes the planet glow like a ‘space lantern’.

“The oxygen airglow was first discovered thanks to ground observations, and also observed by other missions to Venus such as the Russian Venera spacecraft and the US Pioneer Venus orbiter,” said Pierre Drossart, co-Principal Investigator on Venus Express’ VIRTIS instrument. “However, the global and detailed view we are getting thanks to Venus Express is truly unprecedented.”

The fluorescence of the airglow is produced when oxygen atoms present in the atmosphere ‘recombine’ into molecular oxygen emitting light. Where does the oxygen come from?

“The oxygen in the atmosphere of Venus is a very rare element,” continued Drossart. At high altitudes in the atmosphere, on the day-side of Venus, the strong flux of ultraviolet radiation coming from the Sun ‘breaks’ the molecules of carbon dioxide present in large quantity in the atmosphere, liberating oxygen atoms. “These atoms are then transported by the so-called ‘sub-solar’ and ‘anti-solar’ atmospheric circulation towards the night side of the planet. Here the atoms migrate from the high atmosphere to a lower layer, called ‘mesosphere’, where they recombine into oxygen. By doing this, they emit light at specific wavelengths that can be observed through remote sensing from Earth and with Venus Express,” added Drossart.

The detection of the airglow, and the capability to follow its evolution in time, is extremely important for several reasons.

“First, we can use the distribution and motion of these fluorescent oxygen ‘clouds’ to understand how the atmospheric layers below move and behave,” said Giuseppe Piccioni, the other co-Principal Investigator on VIRTIS. “In this sense, the oxygen airglow is a real ‘tracer’ of the atmospheric dynamics on Venus.”

“Second, the analysis of this phenomenon will provide new clues on how its global atmospheric chemistry works – a very challenging task indeed, and still an open field of research,” continued Piccioni. “By calculating the speed at which this chemical ‘recombination’ takes place, we might be able – in the future – to understand if there are mechanisms that favour, or catalyze, this recombination, and learn more about the production and recombination of the other chemical species in the Venusian atmosphere.”

“Third, the observation of the oxygen airglow also allows to a better understanding of the global ‘energetic’ exchange between Venus’s mesosphere – at upper boundary of which the airglow is situated, with Venus’ thermosphere, an even higher layer directly influenced by the Sun.”

The mechanism for the production of the airglow was described in 1979 by P. Connes, after its emission was discovered through ground-based observations.

Venus Express was launched on 9 November 2005 from the Baikonur cosmodrome in Kazakhstan on board a Starsem Soyuz-Fregat rocket. It reached Venus about five months later, on 11 April 2006, when a delicate manoeuvre injected it into orbit around the planet. After a period of commissioning the spacecraft and the instruments, Venus Express started its nominal science operations on 4 July 2006.