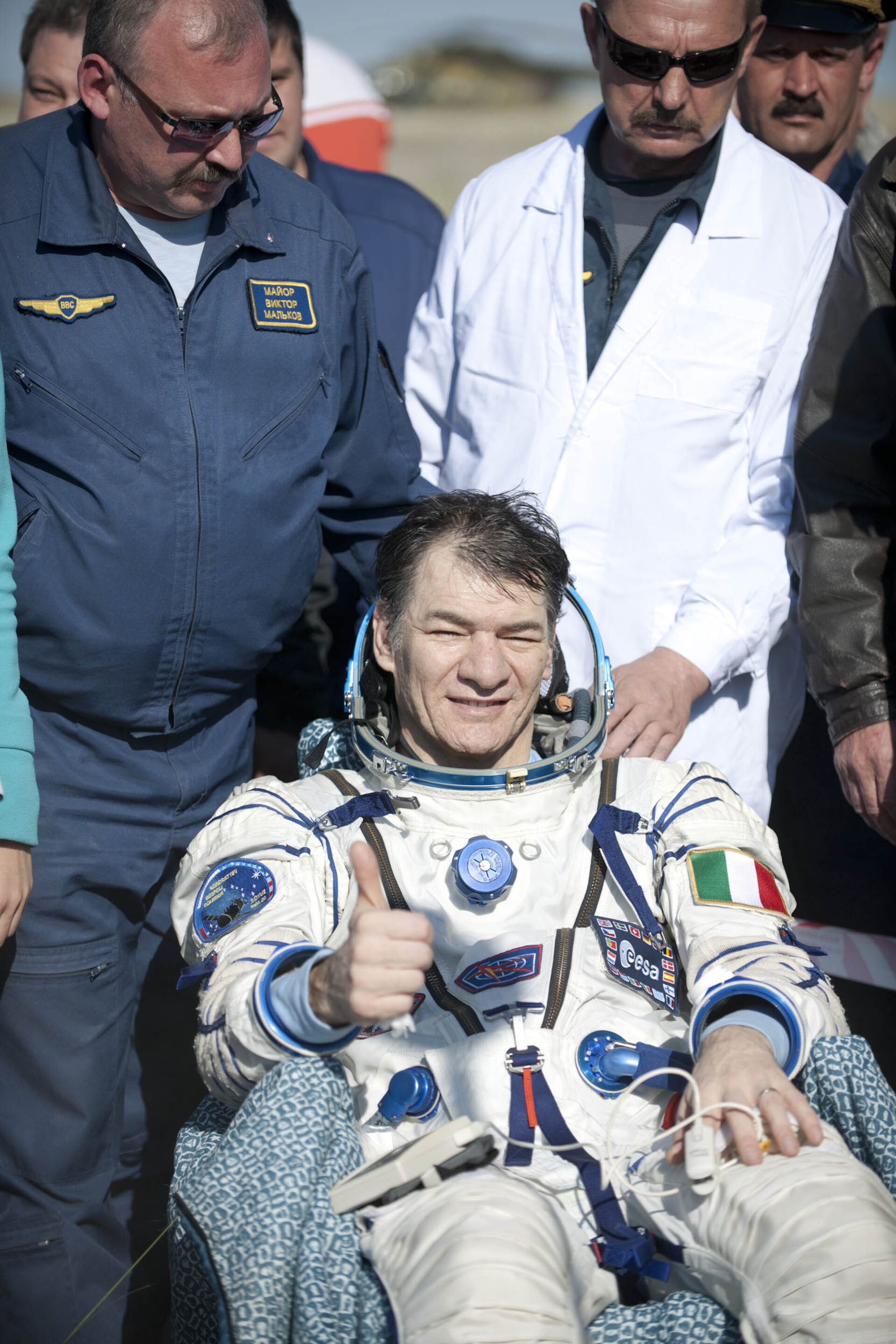 ESA astronaut Paolo Nespoli landed back on Earth this morning to conclude his 159-day mission to the International Space Station. Paolo had been serving as the flight engineer for Expeditions 26 and 27 since December.

Paolo’s MagISStra mission, the third long mission by a European astronaut on the Station, came to end at 04:27 CEST (02:27 GMT) on the steppes of Kazakhstan as the Soyuz TMA-20 spacecraft fired its retrorockets for a soft landing.

Paolo and crewmates Dmitri Kondratyev and Catherine Coleman boarded the Soyuz on Monday night and undocked from the Station’s nadir Rassvet port at 23:35 CEST (21:35 GMT).

Commander Kondratyev flew the Soyuz to a safe distance while Paolo took unique photos of the orbital outpost. The Station was tilted 130 degrees for the best possible view of the complex with Space Shuttle Endeavour, ATV Johannes Kepler, Soyuz TMA-21 and Progress all attached.

Paolo recorded images from his vantage point in the Soyuz orbital module for about 30 minutes before returning to his seat in the landing module.

During more than five months in space, Paolo carried out an extensive research programme, ranging from nutritional tests and medical experiments to radiation monitoring and trying to understand the convective pattern generated in a fluid confined in a sphere – like lava under Earth’s crust.

Paolo also harvested numerous samples to be brought back to Earth by Space Shuttle and Soyuz.

His stay aboard the Station has been a particularly busy one. He participated in the docking of two cargo spacecraft: Europe’s second Automated Transfer Vehicle, Johannes Kepler, in February, and the second Japanese HII Transfer Vehicle in January.

Shuttle Endeavour docked just last week, bringing another Italian, ESA astronaut Roberto Vittori. This is the first time that two Italians were aboard the Station at the same time.

Paolo’s descent also marked the first time that a Soyuz spacecraft departed with a Shuttle still docked to the Station.

Far away, but so close

The end of MagISStra will leave some users of social media without their regular morning routine – many people started their days by checking the latest photos from space.

Paolo enthusiastically photographed his view of Earth, downloading an impressive 667 images to his photostream – averaging four photos a day. The total number of views is almost a stunning 7 200 000.

He was also very active on Twitter, with 46 725 followers and 1309 tweets sent. He was shortlisted for a Shorty award and he is the best-known European astronaut in the social media channels.

Paolo will now be busy for some time with post-flight briefings and tests, as well as regaining his normal strength after such a long period of weightlessness.