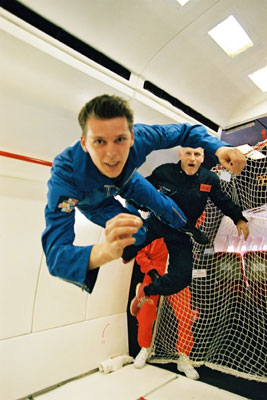 Our everyday lives involve such activities as sitting, walking, picking up things from the ground and lying in bed. None of these activities are possible in orbit.

Once a spacecraft reaches orbit, everything inside it appears to be weightless. Anything (or anyone) that is not tied down will float.

Astronauts first feel the effect of weightlessness when the rocket engines are turned off. Straight away, they begin to float, held down only by seatbelts. Weightlessness allows astronauts to appear superstrong. They can lift objects that would be far too heavy to move on Earth. But there are some drawbacks.

Without the effect of gravity, blood and other body fluids begin to flow towards the head. This can cause a feeling of stuffiness and headaches. With no gravity to push against, bones and muscles can become weak. To stay fit, they have to exercise several hours each day. This allows them to recover more quickly when they return to Earth.

In a shuttle or space station, there is no up or down. There is no difference between a floor and a ceiling. This can make astronauts feel sick until they get used to this strange arrangement.