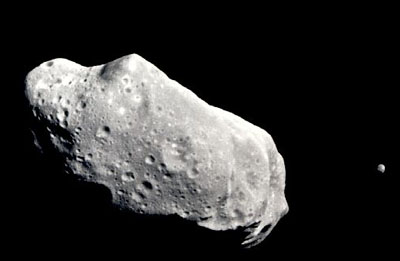 Asteroids are small, rocky bodies that have been left over from the formation of the planets 4.5 billion years ago. They are often known as 'minor planets'.

There are thought to be billions of these chunks of rock. Most of them lie in a doughnut-shaped 'main belt' between the orbits of Mars and Jupiter. On the inner edge of this main belt, asteroids take about three years to orbit the Sun. Those near the outer limit of the main belt take twice as long.

The word 'asteroid' means 'star-like'. They were given this name because they can only be seen as points of light in most telescopes. By the early 20th century, astronomers were calling them the 'vermin of the skies'. They were visible in such large numbers that they were spoiling photographs of distant galaxies and nebulas.

The largest of the asteroids, Ceres, was the first to be discovered. It was found by Giuseppi Piazzi from Palermo, Sicily, on 1 January 1801.