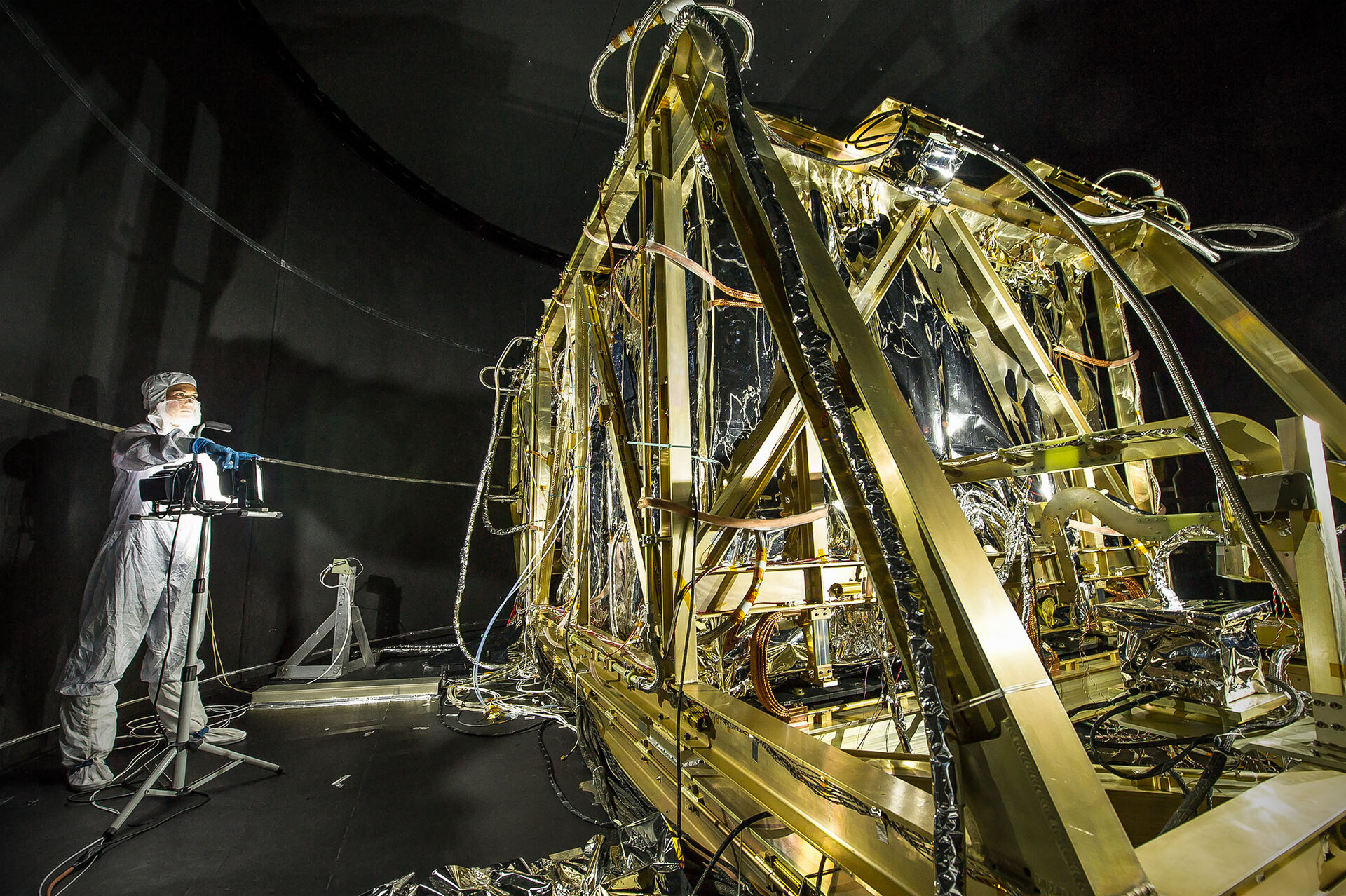 Building a space telescope is no mean feat. Conditions here on Earth are drastically different from those experienced in orbit around our planet. How do we know that any telescope built in our controlled laboratories can withstand the harsh environment of space?

Luckily, we can recreate space-like conditions using simulators such as this thermal–vacuum chamber at NASA’s Goddard Space Flight Center in Maryland, USA. In this image, the chamber is not in action, as shown by the presence of a photographer wielding a torch on the sidelines. When switched on, multiple pumps suck all the air out to create a space-like vacuum, and the temperature can drop to a toe-curlingly low –253°C.

However, the real star of this image is the futuristic gold-coloured frame and its contents. This frame holds the Integrated Science Instrument Module, a structure containing the science instruments for 2018’s James Webb Space Telescope, or JWST, successor to the Hubble Space Telescope.

Along with the frame, this module weighs about as much as an elephant and houses four instruments to observe in the infrared, a part of the spectrum that is key for exploring the origins of the Universe and the properties of very distant cosmic objects.

This capability is the reason for the chamber’s extremely low temperature: infrared light is emitted by warm objects. To avoid infrared emissions from the telescope itself interfering with JWST’s observations, the entire telescope must be cooled to very low temperatures.

In space, JWST will make use of a giant sunshield to keep it completely in the shadows. This will keep the telescope at –233°C.

The JWST team hit a milestone last summer as all four science instruments passed their cryogenic testing in this chamber. The three near-infrared units were cooled to around –233°C, while the mid-infrared instrument reached an even lower –266°C, for a total of 116 days. For more information, read here.

After these tests, one of the units – the Near InfraRed Spectrograph – was removed and fitted with new detectors and ‘microshutters’, a new technology to study hundreds of celestial objects simultaneously using minuscule windows the width of a human hair. When this upgraded instrument is returned, the entire module will continue with further environmental tests to reproduce the conditions endured during launch and in space. For more information, read here.

JWST is a joint project of NASA, ESA and the Canadian Space Agency.