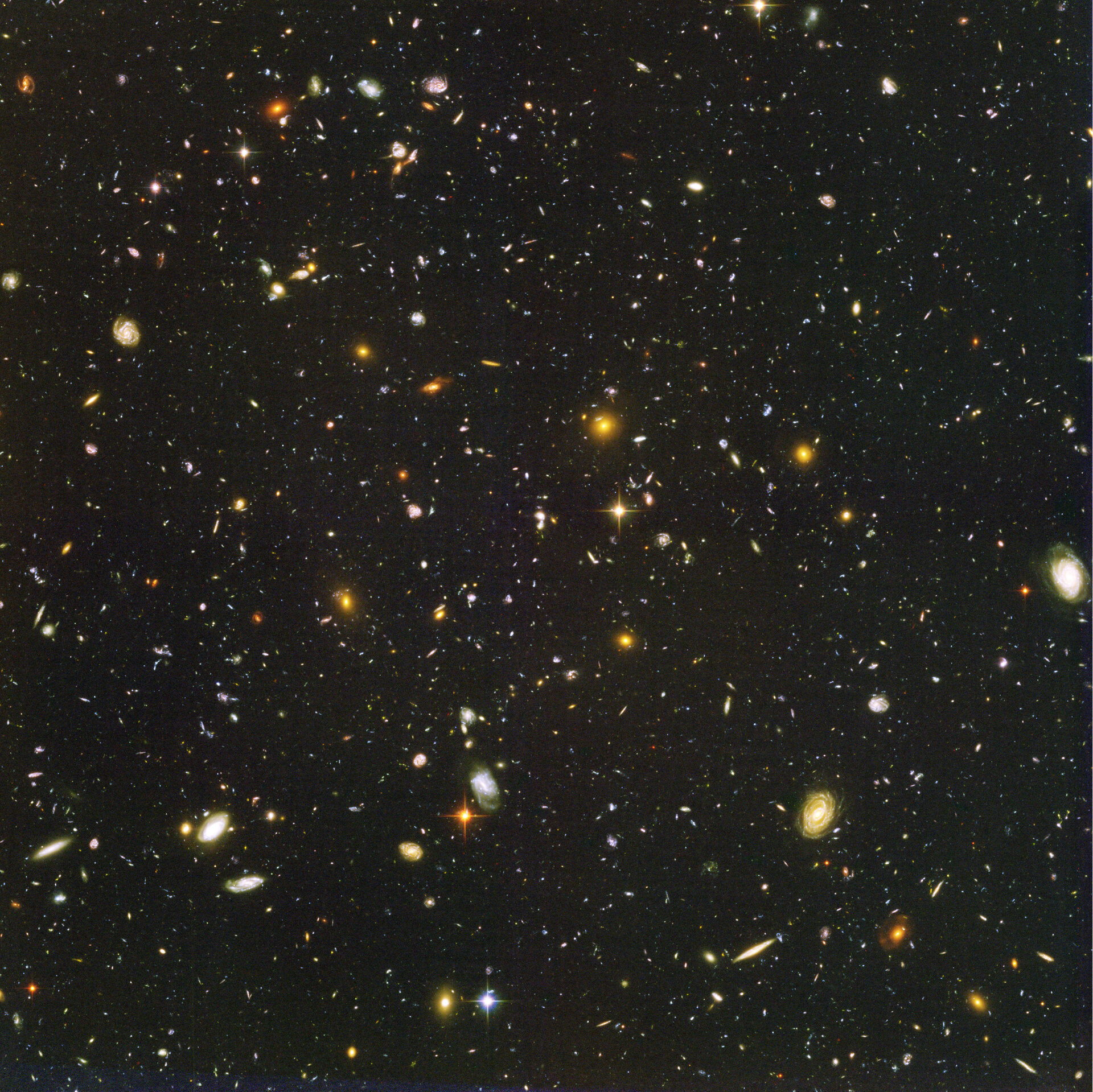 Astronomers analysing two of the deepest views of the cosmos made with the NASA/ESA Hubble Space Telescope have uncovered a gold mine of galaxies, more than 500, that existed less than a thousand million years after the Big Bang.

These galaxies thrived when the cosmos was less than 7 percent of its present age (13.7 thousand million years). This sample represents the most comprehensive compilation of galaxies in the early Universe, researchers said.

The discovery is scientifically invaluable for understanding the origin of galaxies, considering that just a decade ago early galaxy formation was largely uncharted territory.

Astronomers had never seen a galaxy that existed when the Universe was a thousand million years old, so finding 500 in a Hubble survey is a significant leap forward for cosmologists.

The galaxies unveiled by Hubble are smaller than today's giant galaxies and very bluish in colour, indicating they are ablaze with star birth. The images appear red because of the galaxies' tremendous distance from Earth. The blue light from their young stars took nearly 13 thousand million years to arrive at Earth. During the journey, the blue light was shifted to red light due to the expansion of space.

"Finding so many of these dwarf galaxies, but so few bright ones, is evidence of galaxies building up from small pieces - merging together as predicted by the hierarchical theory of galaxy formation," said astronomer Rychard Bouwens of the University of California, Santa Cruz, USA who led the Hubble study.

Bouwens and his team spied these galaxies in an analysis of the Hubble Ultra Deep Field (HUDF), completed in 2004, and the Great Observatories Origins Deep Survey (GOODS), made in 2003.

The findings also show that these dwarf galaxies were producing stars at a furious rate, about ten times faster than is happening now in nearby galaxies. Astronomers have long debated whether the hottest stars in early star-forming galaxies, such as those in this study, may have provided enough radiation to reheat the cold hydrogen gas that existed between galaxies in the early Universe. The gas had been cooling since the Big Bang.

"Seeing all of these starburst galaxies provides evidence that there were enough galaxies one thousand million years after the Big Bang to finish reheating the Universe," explained team member Garth Illingworth of the University of California, Santa Cruz. "It highlights a period of fundamental change in the Universe, and we are seeing the galaxy population that brought about that change."

In terms of human lifetimes, cosmic events happen very slowly. The evolution of galaxies and stars, for example, occurs over thousands of millions of years. Astronomers, therefore, rarely witness dramatic, relatively brief transitions that changed the Universe. One such event in the Universe is 'reheating'.

The reheating, driven by the galaxies' ultraviolet starlight, transformed the gas between galaxies from a cold, dark hydrogen soup, to a hot, transparent plasma over only a few hundred million years. With Hubble's help, astronomers are now beginning to see the kinds of galaxies that brought about the reheating.

Just a few years ago, astronomers did not have the technology to hunt for faraway galaxies in large numbers. The installation of the Advanced Camera for Surveys (ACS) aboard the Hubble Space Telescope in 2002 allowed astronomers to probe some of the deepest recesses of our Universe. Astronomers used the ACS to observe distant galaxies in the HUDF and GOODS public surveys.

Another major step in the exploration of the Universe's earliest years will occur if Hubble undergoes its next upgrade with the Wide Field Planetary Camera 3 (WFC3). The WFC3's infrared sensitivity will allow it to detect galaxies that are so far away their starlight has been stretched to infrared wavelengths by the expanding Universe.

The galaxies uncovered so far promise that many more galaxies at even greater distances are awaiting discovery by the NASA/ESA/CSA James Webb Space Telescope (JWST), scheduled to launch in 2013.

Co-author Marijn Franx, member of the ESA JWST NIRSPEC science team, explains: "The JWST will be able to see even further back into the early Universe, and glimpse the first objects that formed. ESA’s NIRSPEC instrument, can even measure the exact distances of these objects."

The results were presented on 17 August at the 2006 General Assembly of the International Astronomical Union, and will be published in the November 20 issue of the Astrophysical Journal.