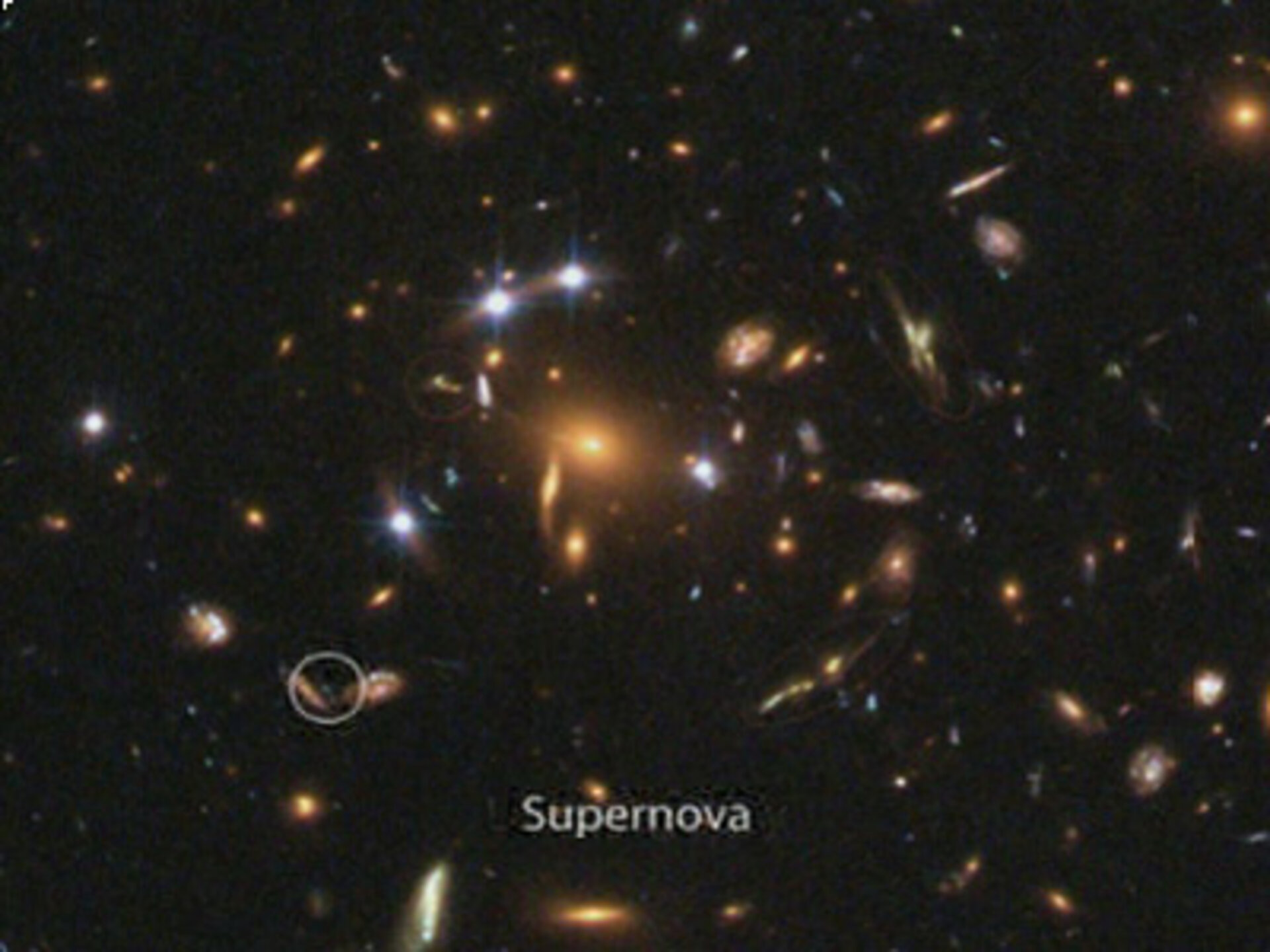 The NASA/ESA Hubble Space Telescope has captured the first-ever picture of a distant quasar lensed into five images. In addition the image holds a treasure of lensed galaxies and even a supernova.

The most unique feature in this new image taken with the NASA/ESA Hubble Space Telescope is a group of five quasar images produced by a process called ‘gravitational lensing’. By this process the gravitational field of an extremely massive body - in this case, a cluster of galaxies - warps the surrounding space. The light emitted from an object - in this case, a quasar – travels amplified and bended, and multiple images of the light source may be seen, each taking a different path through the warped space.

Although other multiply lensed quasars have been seen before, this is the only case so far in which multiple quasar images are produced by an entire galaxy cluster acting as a gravitational lens.

The galaxy cluster creating the lens is known as SDSS J1004+4112 and was discovered as part of the Sloan Digital Sky Survey. It is one of the more distant clusters known (seven thousand million light-years), and the image we observe today was ‘projected’ when the Universe was half of its present age. The cluster also creates a cobweb of images of other distant galaxies gravitationally lensed into arcs.

The background quasar observed by Hubble is the brilliant core of a galaxy. It is powered by a black hole, which is devouring gas and dust and creating a gusher of light in the process. When the quasar’s light passes through the gravity field of the galaxy cluster that lies between us and the quasar, the light is bent by the space-warping gravity field in such a way that five separate images of the object are produced around the cluster’s centre.

The fifth quasar image is embedded to the right of the core of the central galaxy in the cluster. A gravitational lens will always produce an odd number of lensed images, but one image is usually very weak and embedded deep within the light of the lensing object itself.

Though previous observations of SDSS J1004+4112 have revealed four of the images of this system, Hubble’s sharp vision and the high magnification of this gravitational lens combine to place a fifth image far enough from the core of the central imaging galaxy to make it visible as well.

The galaxy hosting the background quasar is at a distance of 10 thousand million light years, and it can be seen in the image as faint red arcs. This is the most highly magnified quasar host galaxy ever seen.

The Hubble picture also shows a large number of stretched arcs that are more distant galaxies lying behind the cluster, each of which is split into multiple distorted images. The most distant galaxy identified and confirmed so far is 12 thousand million light years away.

By comparing this image to a picture of the cluster obtained with Hubble a year earlier, the researchers discovered a rare event - a supernova exploding in one of the cluster galaxies. This supernova exploded seven thousand million years ago, and the data, together with other supernova observations, are being used to understand how the Universe was enriched by heavy elements through these explosions.