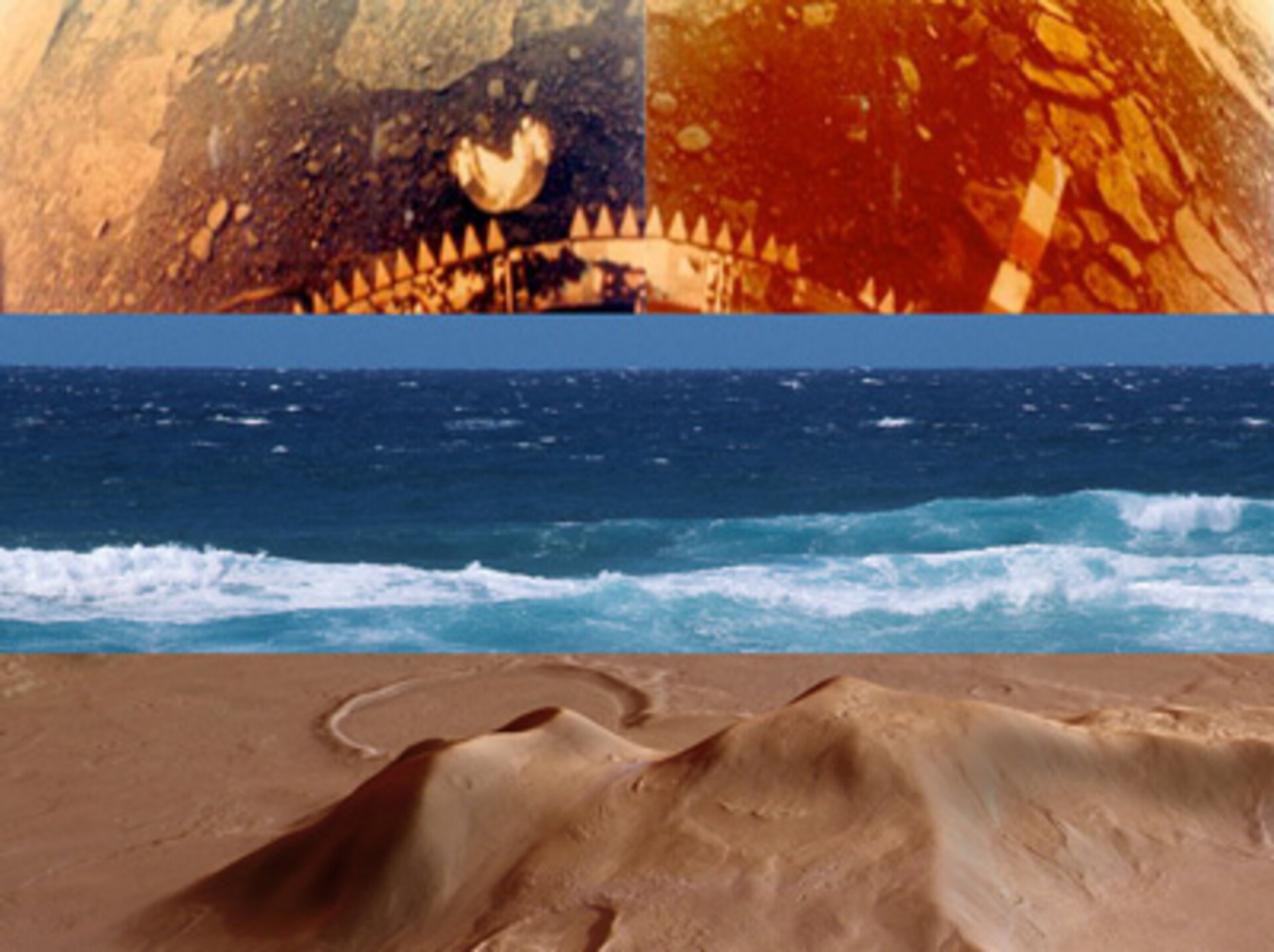 Modelling Earth’s climate to predict its future has assumed tremendous importance in the light of mankind’s influence on the atmosphere. The climate of our two neighbours is in stark contrast to that of our home planet, making data from ESA’s Venus Express and Mars Express invaluable to climate scientists.

Venus is a cloudy inferno whilst Mars is a frigid desert. As current concerns about global warming have now achieved widespread acceptance, pressure has increased on scientists to propose solutions.

The key weapon in a climate scientist’s arsenal is the climate model, a computer programme that uses the equations of physics to investigate the way in which Earth’s atmosphere works. The programme helps predict how the atmosphere might change in the future.

“To members of the public it must seem like climate models are crystal balls, but they are actually just complex equations” says David Grinspoon, Denver Museum of Nature and Science, and one of Venus Express’s interdisciplinary scientists.

The more scientists look at those equations, the more they realise just how complicated Earth’s climate system is. Grinspoon puts the predicament like this: “In fifty or a hundred years, we will know whether today’s climate models were right but if they are wrong, by then it will be too late.”

To help increase confidence in the computer models, Grinspoon believes that scientists should look at our neighbouring planets. “It seems that both Mars and Venus started out much more like Earth and then changed. They both hold priceless climate information for Earth,” says Grinspoon.

The atmosphere of Venus is much thicker than Earth’s. Nevertheless, current climate models can reproduce its present temperature structure well. Now planetary scientists want to turn the clock back to understand why and how Venus changed from its former Earth-like conditions into the inferno of today.

They believe that the planet experienced a runaway greenhouse effect as the Sun gradually heated up. Astronomers believe that the young Sun was dimmer than the present-day Sun by 30 percent. Over the last 4 thousand million years, it has gradually brightened. During this increase, Venus’s surface water evaporated and entered the atmosphere.

“Water vapour is a powerful greenhouse gas and it caused the planet to heat-up even more. This is turn caused more water to evaporate and led to a powerful positive feedback response known as the runaway greenhouse effect,” says Grinspoon.

As Earth warms in response to manmade pollution, it risks the same fate. Reconstructing the climate of the past on Venus can give scientists a better understanding of how close our planet is to such a catastrophe. However, determining when Venus passed the point of no return is not easy. That’s where ESA’s Venus Express comes in.

The spacecraft is in orbit around Venus collecting data that will help unlock the planet’s past. Venus is losing gas from its atmosphere, so Venus Express is measuring the rate of this loss and the composition of the gas being lost. It also watches the movement of clouds in the planet’s atmosphere. This reveals the way Venus responds to the absorption of sunlight, because the energy from the Sun provides the power that allows the atmosphere to move.

In addition, Venus Express is charting the amount and location of sulphur dioxide in the planet’s atmosphere. Sulphur dioxide is a greenhouse gas and is released by volcanoes on Venus.

“Understanding all of this will help us pin down when Venus lost its water,” says Grinspoon. That knowledge can feed into the interpretation of climate models on the Earth because although both planets seem very different now, the same laws of physics govern both worlds.

Understanding Mars’ past is equally important. ESA’s Mars Express is currently investigating the fate of the Red Planet. Smaller than the Earth, Mars is thought to have lost its atmosphere to space. When Martian volcanoes became extinct, so did the planet’s means of replenishing its atmosphere turning it into an almost-airless desert.

“What happened on these two worlds is very different but either would be equally disastrous for Earth. We are banking on our ability to accurately predict Earth’s future climate,” says Grinspoon. Anything that can shed light on our own future is valuable. That is why the study of our neighbouring worlds is vital.

So, when planetary scientists talk of exploring other worlds, they are also increasing their ability to understand our own planet.