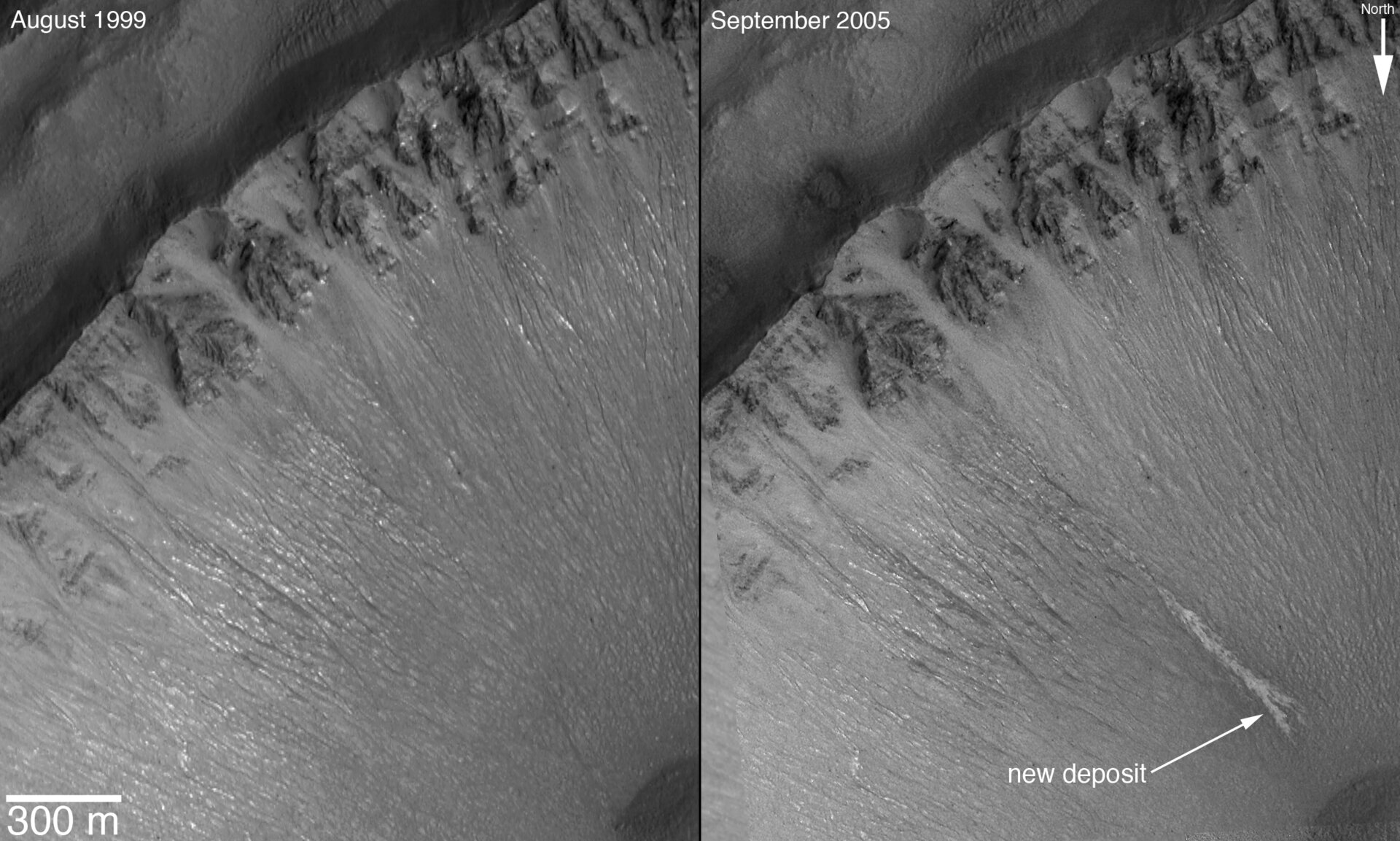 The discovery of bright deposits on Mars, announced today by NASA, could indicate that liquid water has recently flowed on a few locations on the planet. The new data help planetary scientists involved with several missions orbiting the Red Planet focus their quest to understand the Martian water cycle.

It has been an established fact for several years now that water exists on Mars. However, the big question is how much of it – if any – is in liquid form. The newly discovered deposits were identified by comparing different images of the same area taken by NASA's Mars Global Surveyor (MOC camera), over a period of few years. The images suggest that water may have flowed there sometime within the past seven years.

This gives planetary scientists an excellent target for follow-up work. Yet, just because water appears to have flowed does not automatically mean that underground reservoirs of liquid water are present.

ESA’s Mars Express has found large reservoirs of water underground using its radar experiment MARSIS. All are frozen, with the largest in Mars's polar regions. Such frozen underground lakes might be driven to temporarily thaw and flow across the surface by changes in temperature, caused by changes in illumination from the Sun or, possibly, by local variations in the underground pressure.

In addition, much water is locked into so-called hydrated minerals that have been found by the OMEGA instrument on ESA's Mars Express.

The new observations demonstrate the crucial need for continuous monitoring of Mars. Only by studying the same areas over and over again will any temporary processes by revealed. In an extremely lucky case, instruments may even catch the water flowing.

Planetary scientists on both sides of the Atlantic will now be focusing their efforts on combing this region for more evidence of water. Scientists responsible for the MARSIS instrument on Mars Express are looking ahead to see when the ESA spacecraft will next bring the region into view.

MARSIS can probe as deeply as 5 kilometres below the surface, and it is complementary to SHARAD, the radar flown on NASA Mars Reconnaissance Orbiter (MRO). The latter will be help to detect possible water reservoirs contained in the first kilometre, just below the surface of the discovery area.

In addition, other instruments such as cameras and spectrometers will collect more valuable information about this exciting area on Mars. In this way, scientists will continue to piece together the fascinating behaviour of Mars, both in its past and its present.