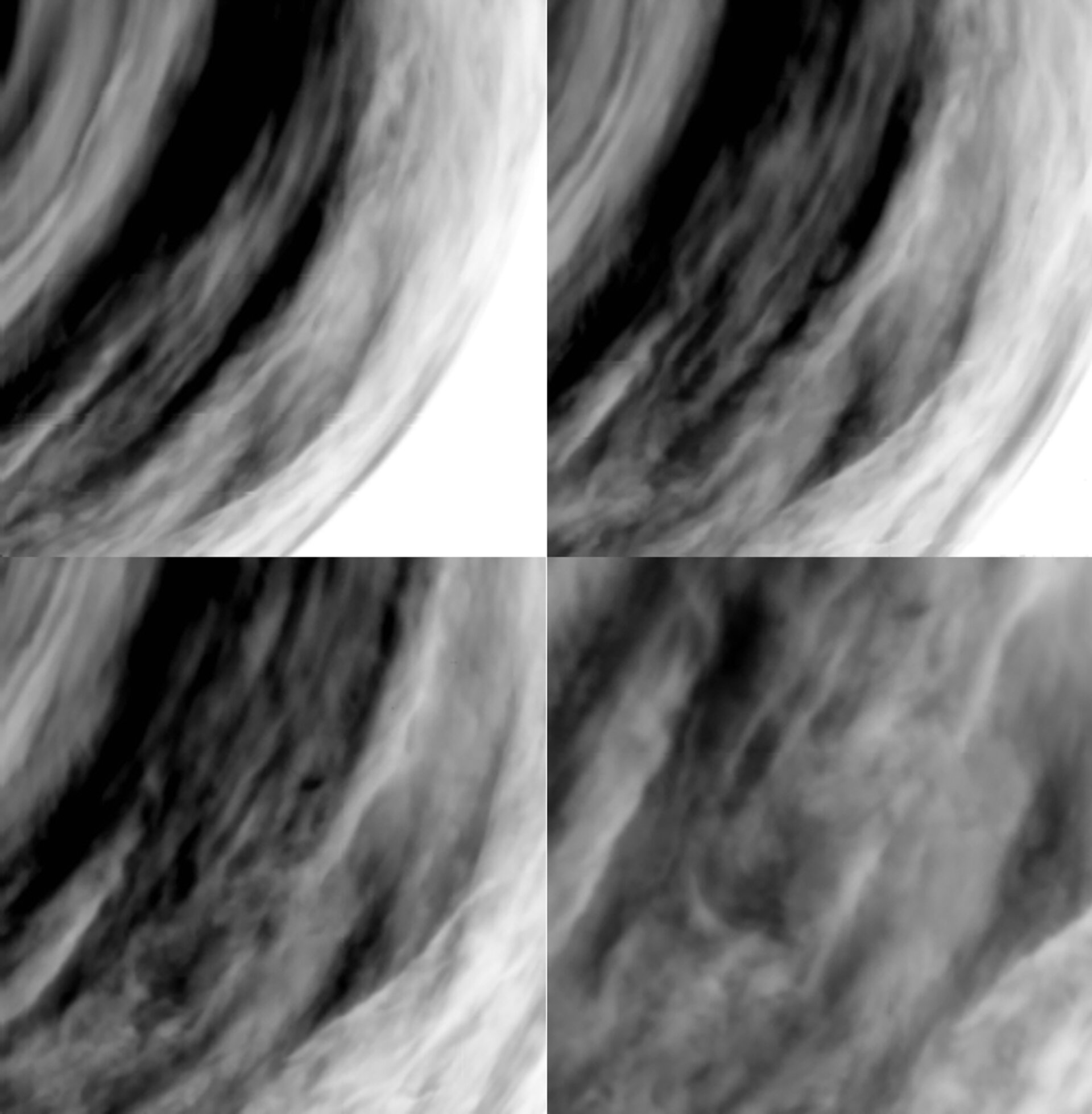 New images and data from ESA’s mission to Venus provide new insights into the turbulent and noxious atmosphere of Earth’s sister planet. What causes violent winds and turbulences? Is the surface topography playing a role in the complex global dynamics of the atmosphere? Venus Express is on the case.

Venus’ atmosphere represents a true puzzle for scientists. Winds are so powerful and fast that they circumnavigate the planet in only four Earth days – the atmospheric ‘super-rotation’ – while the planet itself is very slow in comparison, taking 243 Earth days to perform one full rotation around its axis.

At the poles things get really complicated with huge double-eyed vortices providing a truly dramatic view. In addition, a layer of dense clouds covers the whole planet as a thick curtain, preventing observers using conventional optical means from seeing what lies beneath.

Venus Express is on the contrary capable of looking through the atmosphere at different depths, by probing it at different infrared wavelengths. The Ultraviolet, Visible and Near-Infrared Mapping Spectrometer (VIRTIS) on board is continuing its systematic investigation of Venus’ atmospheric layers to solve the riddle of the causes for such turbulent and stormy atmosphere.

The images presented with this article focus on Venusian atmospheric turbulences and cloud features, whose shape and size vary with planetary latitudes. At the equator, clouds are irregular and assume a peculiar ‘bubble’-shape. At mid latitudes they are more regular and streaky, running almost parallel to the direction of the super rotation with speed reaching more than 400 kilometres per hour. Going higher up in latitude, in the polar region, the clouds end up in entering a vortex shape.

With its multi-wavelength eyes, VIRTIS can observe the atmosphere and the cloud layers not only at different depths, but also both in the day- and night-side of the planet – a characteristic that allows an overall assessment of the ‘environmental’ causes that can be at the origin of such an atmospheric complexity.

At the equator, the extremely violent winds of the super-rotation are in constant ‘battle’ with other kinds of local turbulences, or ‘regional’ winds, creating very complex cloud structures.

One type of regional wind is due to the strong flux of radiation from the Sun reaching the atmosphere of the planet on the day-side. This flux heats up the atmosphere creating convective cells, where masses of warm air move upwards and generate local turbulence and winds.

On the night-side there is obviously no flux from the Sun, but the clouds’ shape and the wind dynamics are somehow similar to that we see on the day-side. So, scientists are currently trying to understand if there is any mechanism other than ‘convection’ responsible for the equatorial turbulences, both on the day- and night-side of Venus.

For instance, VIRTIS imaged clouds over Alpha Regio, an area close to the equator. This area is characterised by a series of troughs, ridges, and faults that are oriented in many directions, with surface features that can be up to 4 kilometres high. There might be a connection between the surface topography and the local atmospheric turbulence which is observed in this area. This and other hypotheses are being investigated by the Venus Express science teams using data from several instruments.

Actually, the Venusian topography may play an important role also in the global atmospheric dynamics. Understanding this surface-atmosphere connection is one of the major objectives of Venus Express - something to be verified in the whole course of the mission.