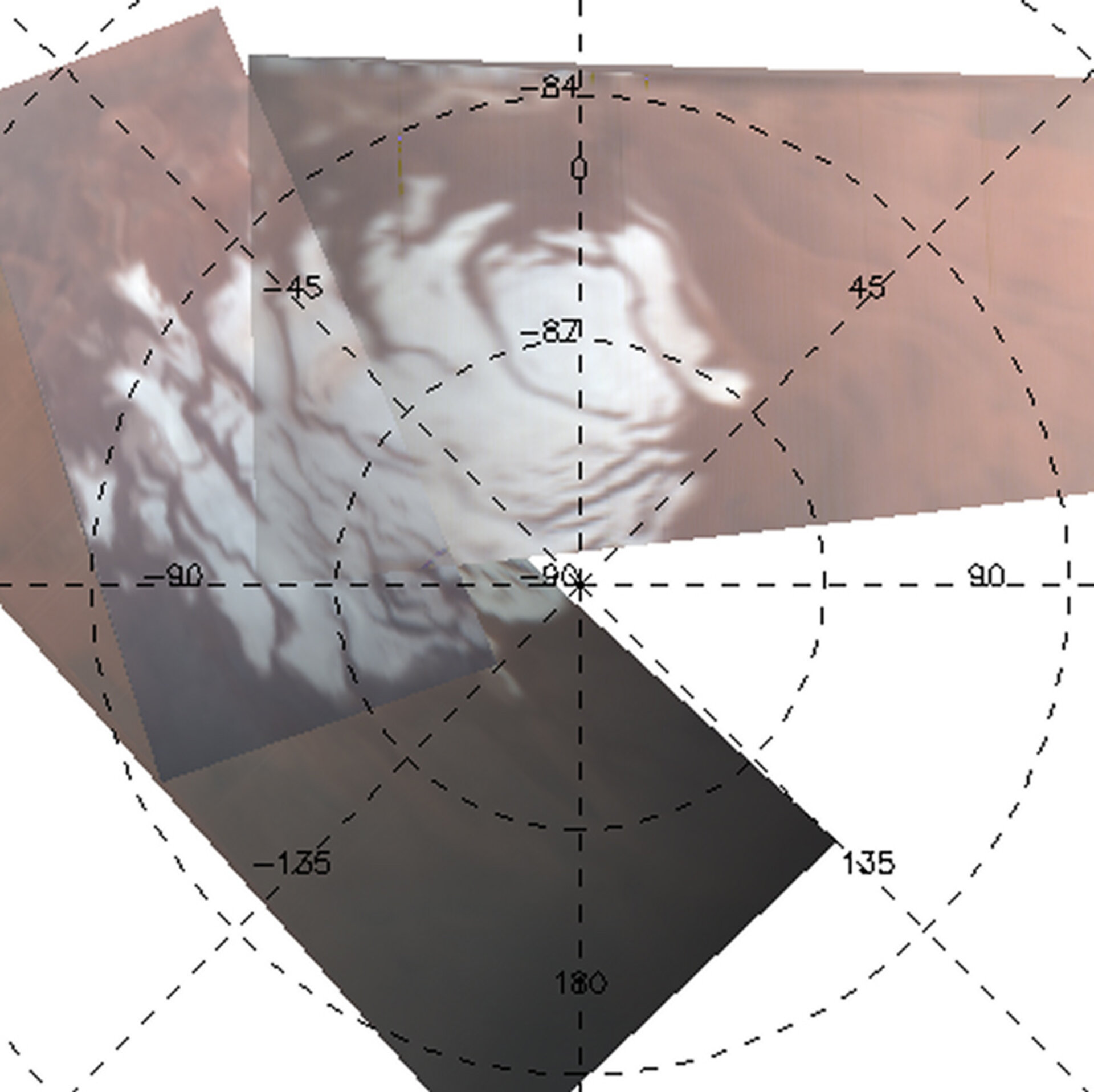 Scientists are now able to better explain why Mars’s residual southern ice cap is misplaced, thanks to data from ESA’s Mars Express spacecraft - the martian weather system is to blame. And so is the largest impact crater on Mars – even though it is nowhere near the south pole.

Like Earth, Mars has frozen polar caps, but unlike Earth, these caps are made of carbon dioxide ice as well as water ice. During the southern hemisphere’s summer, much of the ice cap sublimates, a process in which the ice turns straight back into gas, leaving behind what is known as the residual polar cap. The problem is that while the winter cap is symmetrical about the south pole, the residual cap is offset by some three to four degrees.

This misplacement, which has puzzled planetary scientists for years, was solved by scientists in 2005 but now, thanks to ESA’s Mars Express, new information is available to explain the misplacement.

Marco Giuranna of the Istituto di Fisica dello Spazio Interplanetario CNR (IFSI), Rome, Italy, and colleagues have used the Planetary Fourier Spectrometer (PFS) onboard Mars Express to measure the temperature of the martian atmosphere from the ground up to an altitude of 50 km above the south polar region.

The team used the profiles to chart the way the atmosphere changes in temperature and other characteristics over more than half a martian year. They monitored the way carbon dioxide builds into the southern ice cap as the martian autumn, or fall, turns into the martian winter. “It is not a straightforward process. We found that two regional weather systems developed from mid-fall through the winter,” says Giuranna.

These weather systems are derived from strong eastward winds that characterise the martian atmospheric circulation at mid-latitudes. They blow straight into the Hellas Basin, the largest impact structure on Mars with a diameter of 2300 km and a depth of 7 km. The crater’s depth and the steep rise of the walls deflect the winds and create what are called Rossby waves on Earth.

Giuranna found that the temperature of the low-pressure system is often below the condensation point for carbon dioxide, so the gas condenses and falls from the sky as snow and builds up on the ground as frost. In the high-pressure system, the conditions are never appropriate for snow, so only ground frost occurs. Thus, the south polar cap is built by two different mechanisms.

The areas that have extensive snow cover do not sublimate in the summer because they reflect more sunlight back into space than the surface frost. Frost grains tend to be larger than snow grains and have rougher surfaces. The ragged texture traps more sunlight, driving the sublimation.

So the western area of the southern polar cap, built of snow and frost, not only has a larger amount of carbon dioxide ice deposited but also sublimates more slowly during the summer, while the eastern area built of frost disappears completely. This explains why the residual cap is not symmetrically placed around the south pole.

“This has been a martian curiosity for many years,” says Giuranna. Thanks to Mars Express, planetary scientists now understand a new facet of this amazing, alien world.

'PFS/MEX observations of the condensing CO2 south polar cap of Mars' by M. Giuranna, D. Grassi, V. Formisano, L. Montabone, F. Forget, L. Zasova is to be published in a forthcoming edition of the journal Icarus.