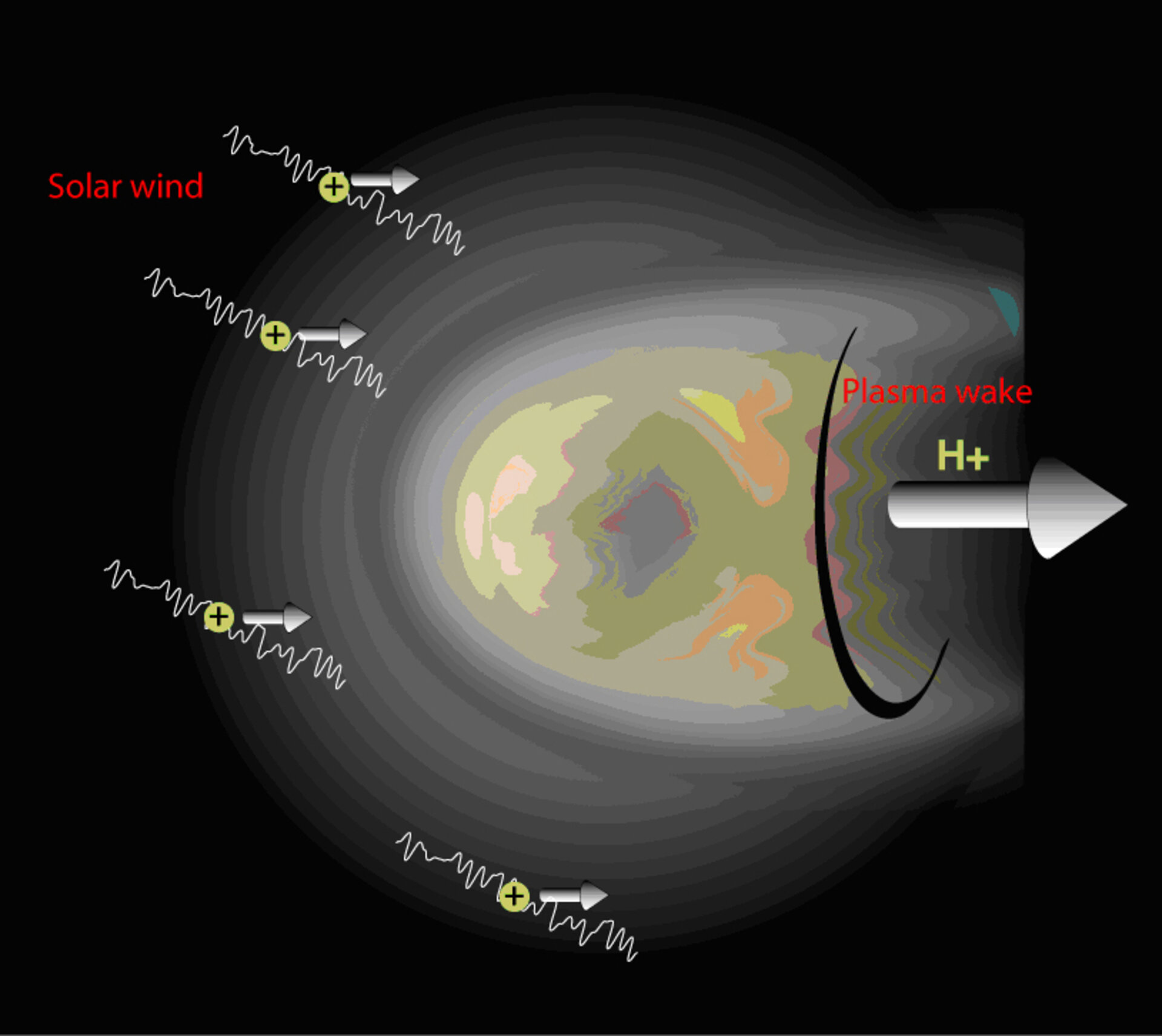 Venus Express has exposed the true extent to which the Sun strips away the atmosphere of Venus. This process could be an important contribution to the way the planet has evolved to become so different from the Earth.

The Sun has probably been stripping away the Venus’ atmosphere throughout the planet’s four-thousand million-year history. Unlike Earth, Venus does not possess an intrinsic magnetic field to protect its atmosphere from the solar wind, a constant stream of electrically charged particles emitted by the Sun. Instead, the solar wind interacts directly with the upper atmosphere of Venus.

“The solar wind interaction is important because it defines the conditions at the boundary of the atmosphere with space and it is a very active boundary,” says Stanislav Barabash at the Swedish Institute of Space Physics, Kiruna, Sweden.

In particular, the interaction causes Venus’s atmosphere to lose its gases in the form of ionized particles. The Analyzer of Space Plasmas and Energetic Atoms (ASPERA) on Venus Express has been studying this interaction and has revealed, for the first time, the composition of the escaping particles. They are predominantly hydrogen, oxygen and helium ions.

The first two components of the escaping ions are highly important because they are the chemical constituents of water. Water molecules are thought to be the principal contributors of hydrogen in the upper atmosphere of Venus. The solar ultraviolet radiation breaks water into electrically charged ‘atoms’, turning it into what scientists call a plasma, and this plasma is then accelerated into space. Thus, two hydrogen atoms should be escaping for every one of oxygen.

The highly elliptical polar orbit of Venus Express, with its closest approach to the planet of 250–350 km and its furthest reach of 66,000 km, is perfect for studying the escaping planetary ions. This is because it covers the region of the solar wind interaction near the planet and the region directly downstream of the planet, as well as for reference the unperturbed solar wind far away from the planet.

Prior to Venus Express, scientists knew that particles were probably escaping from Venus’s atmosphere but they could only guess the composition of those particles.

ASPERA finally established the composition of the escaping plasma and measured that the escape of hydrogen to oxygen is, indeed, in the same ratio as water: two hydrogens for every oxygen.

This may be the critical observation in understanding why Venus is so dry today. Perhaps the solar wind has gradually stripped the planet of water. The way to estimate this is to observe the process for as long as possible, watching for changes in the escape rate, brought about by different amounts of solar activity.

Solar activity controls almost every aspect of the Venus plasma environment. Although Venus has no intrinsic magnetic field, the interplanetary magnetic field carried by the solar wind piles up above the planet’s upper atmosphere, creating a weak magnetic envelop around Venus. This prevents the solar wind from entering the atmosphere.

The magnetometer instrument (MAG) on Venus Express has shown that this field is wrapped around the day-side of the planet and continues to hug the shape of the planet on the night-side. The configuration of the night-time magnetic field seems likely to promote the acceleration of plasma, resulting in further loss of the atmosphere.

“For the first time, we could perform the in-situ observations of the near-Venus plasma environment at solar minimum. We see a very different picture of solar wind interaction with Venus than the well-known observations at solar maximum.” says Tielong Zhang, Space Research Institute of Austrian Academy of Sciences, Austria.

During Venus Express’s extended mission, solar activity is expected to rise from its current minimum levels, giving planetary scientists the conditions they need in order to study this exotic process further and understand just how important it has been for Venus.

The findings appear in the 29 November issue of the scientific journal Nature, in the papers: 'Venus loses its water through the plasma wake', by S.Barabash et al., and 'Little or no solar wind enters Venus' atmosphere at solar minimum', by T.Zang et al.