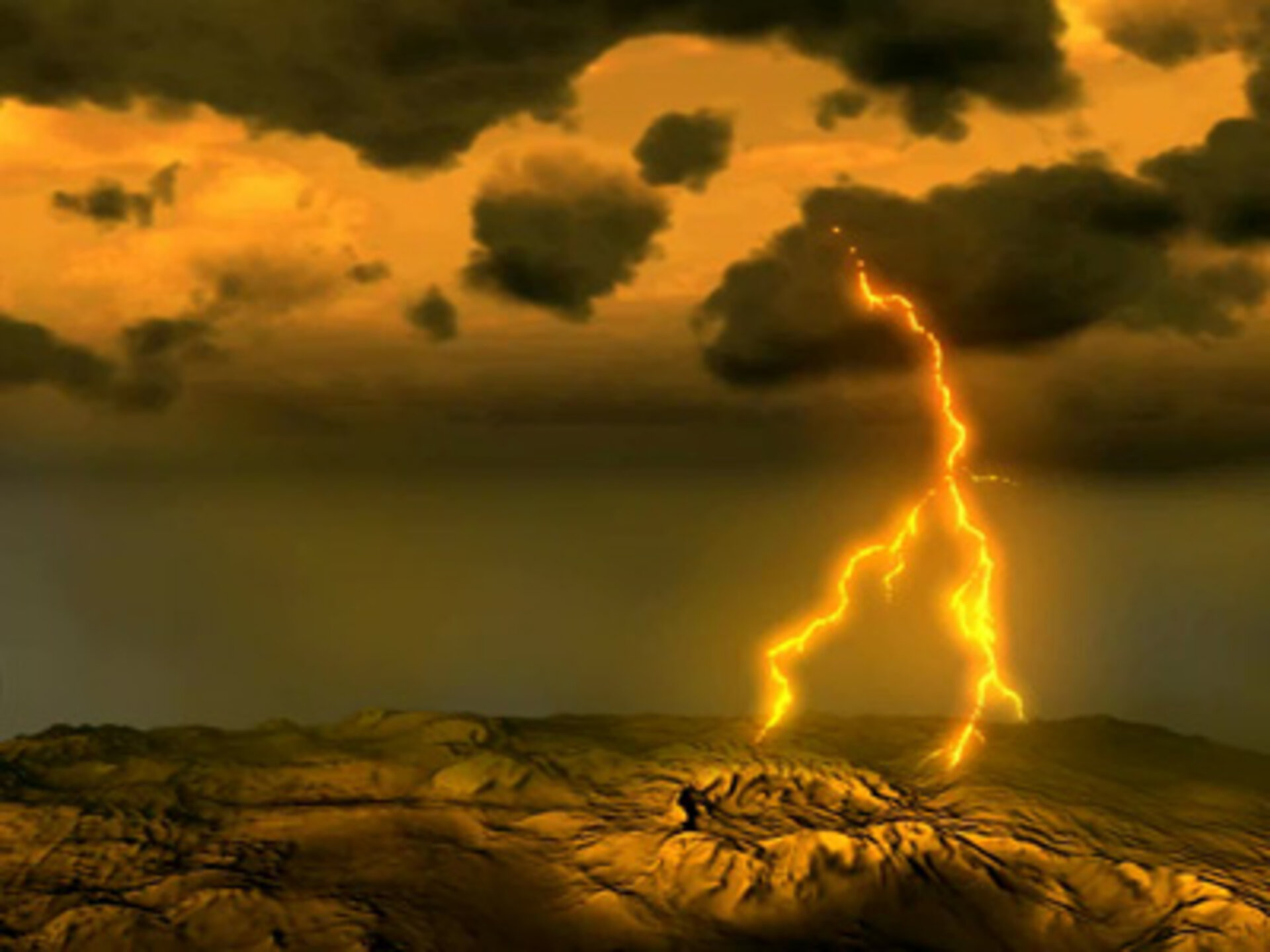 Today, Venus is a hellish place of high temperatures and crushing air pressure. Venus Express is showing that this was not always the case. Instead, some time in the past, Venus was probably much more Earth-like and contained large quantities of water.

Planetary scientists have long wondered just how Earth-like Venus is or might have been. Until the 1960s, astronomers speculated that Venus might be a tropical forest planet. This view changed when microwave observations began to suggest an extremely hot surface. The Russian and American spacecraft of the 1960s and 70s confirmed that Venus possesses surface temperatures of over 400°C and surface pressure a hundred times that of Earth.

The winds in Venus’s atmosphere are severe, blowing at speeds of up to, and over, a 100 m/s. Yet, as fierce as they are, not even the winds from the giant south polar vortex extend all the way down to the planet’s surface.

Venus Express can see down to about 45-50 km above the surface in the south polar region. Feeding this data into computer models suggests that the vortex cannot penetrate into the lower atmosphere because of the great density of gas there. “It is difficult to move around such a heavy mass of atmosphere. We do not expect big winds at the surface of Venus,” says Giuseppe Piccioni, IASF-Istituto Nazionale di Astrofisica, Italy.

Geologists say that the present is a clue to the past and the same is true for atmospheric physics. Venus Express has revealed an atmospheric process that points to a catastrophic event in Venus’s history.

“Venus has suffered a radical climate disaster but we don’t yet know how, why and when,” says David Grinspoon, a Venus Express interdisciplinary scientist from the Denver Museum of Nature and Science, Colorado, USA.

Venus may once have had this much water as well but it has been gradually stripped off into space by the collision of energetic particles from the Sun. Today, Venus Express has shown that the last remnants of the process are still taking place with the escape of hydrogen and oxygen from the top of the atmosphere.

“We now know that Venus was once more Earth-like,” says Grinspoon, “We cannot tell the full story yet, but the data we are getting shows that Venus Express will reveal the history of water on Venus.

Venus has no seasons because its rotation axis is already perpendicular to its orbit. It rotates just once in 243 Earth days and has a very massive atmosphere. This is chiefly composed of carbon dioxide with clouds primarily of sulphuric acid droplets.

It sounds nothing like Earth, and yet, thanks to Venus Express, planetary scientists now know that it can be explained in the same framework, but with Venus being driven in a different direction.

“The three most important parameters that determine a planet’s ‘behaviour’ are its distance from the Sun, its surface pressure and its rotation rate,” says Fred Taylor, a Venus Express interdisciplinary scientist from the University of Oxford, UK. So, although Venus is similar in size to Earth, it is drastically different in the three parameters that drive its behaviour.

There is another large unknown in the evolution of the atmosphere: the amount of lightning on the planet. Lightning drives the chemistry of an atmosphere by breaking molecules into fragments that can then join other fragments in unexpected ways. Nitric oxide formed in this manner is present in sufficient quantities to be detected from Earth.

“There may be as much lightning on Venus as there is on Earth,” says Chris Russell at the University of California at Los Angeles, who was part of the magnetometer team that searched for, and found, lightning on Venus.

Throughout its extended mission, Venus Express will continue collecting vital data to better understand the evolution of this fascinating planet.

This article is making reference to the following papers, appearing in the 29 November 2007 issue of the scientific journal Nature:

'A warm layer in Venus' cryosphere and high-altitude measurements of HF, HCL, H2O and HDO, by J-L.Bertaux et al.

'Venus loses its water through the plasma wake', by S.Barabash et al.

'South-polar features on Venus similar to those near the north pole', by G.Piccioni et al.

'Lightning on Venus inferred from whistler-mode waves in the ionosphere', by C.T.Russell et al.