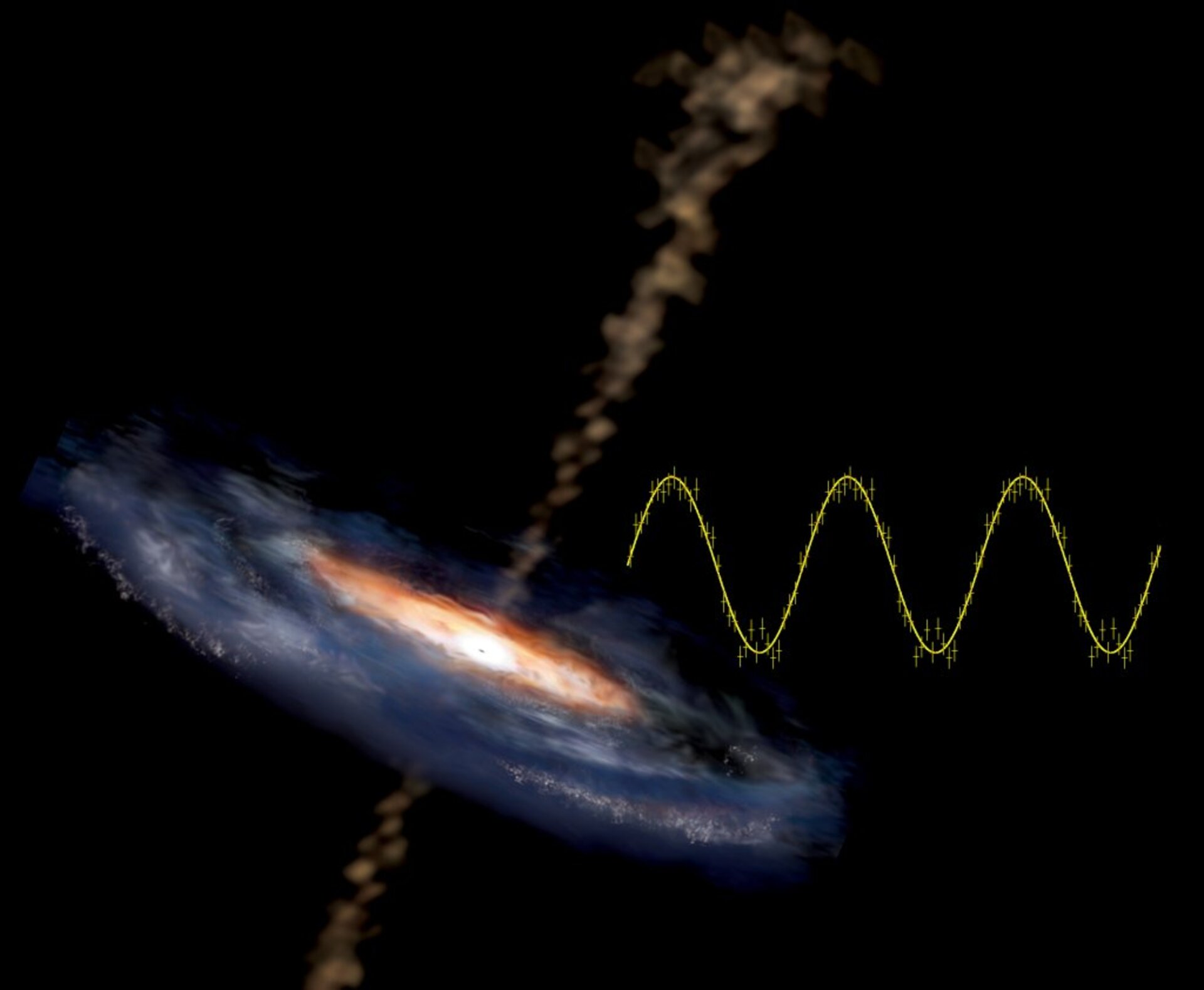 XMM-Newton has uncovered a well-tuned periodic signal from a super-massive black hole lodged at the centre of a galaxy, ending a long quest for such an object. The discovery provides scientists with a clearer picture on black hole accretion processes and an excellent tool to study active galactic nuclei (AGNs).

These periodic signals originating from the black hole are emitted in X-rays, which are blocked out by the Earth's atmosphere. So the team used data from ESA’s orbiting X-ray observatory, XMM-Newton, to make the discovery.

The super-massive black hole, whose signals XMM-Newton has overheard, is located at the centre of a galaxy that goes by the ungainly name RE J1034+396. The black hole itself is estimated to be a million times as massive as our Sun.

In theory, as matter is sucked in to a black hole, it is heated up, and emits X-rays. The X-ray emission can then be modulated at a certain frequency, as infalling matter wobbles around the black hole, and this frequency is detected as a periodic signal. From the frequency of the signal, it is possible to estimate the size of the black hole itself. These periodic signals are widely observed in black holes of a lower mass, of the order of tens of solar masses, in our Galaxy.

XMM-Newton’s sensitive instruments have now shown that the black hole at the centre of RE J1034+396 displays a periodic signal (called a quasi-periodic oscillation), once per hour.

The finding confirms that the fundamental physical processes behind black hole accretion mechanisms are the same, giving them a new, powerful tool to study AGN.

“With the observation of these well-tuned signals, we know for sure that an increase of even a million times in the mass of the black hole doesn't seem to change the basic process by which gas is pulled into it,” said Dr Marek Gierliński of the University of Durham, lead author of the paper in which the findings are reported.

“This long-awaited discovery has been made possible with XMM-Newton's highly sensitive instruments. We are thrilled that the mission has made a fundamental contribution to our understanding of these complex systems,” said Norbert Schartel, ESA’s XMM-Newton Project Scientist.

Now the quest is on to find out why some black holes show this behaviour and others don’t, and to learn more about how matter behaves just before it falls into a black hole.

The findings appear in ‘A ~1h X-ray periodicity in an active galaxy RE J1034+396’ by M. Gierliński, M. Middleton1, M. Ward and C. Done, published in today’s issue of the journal Nature.