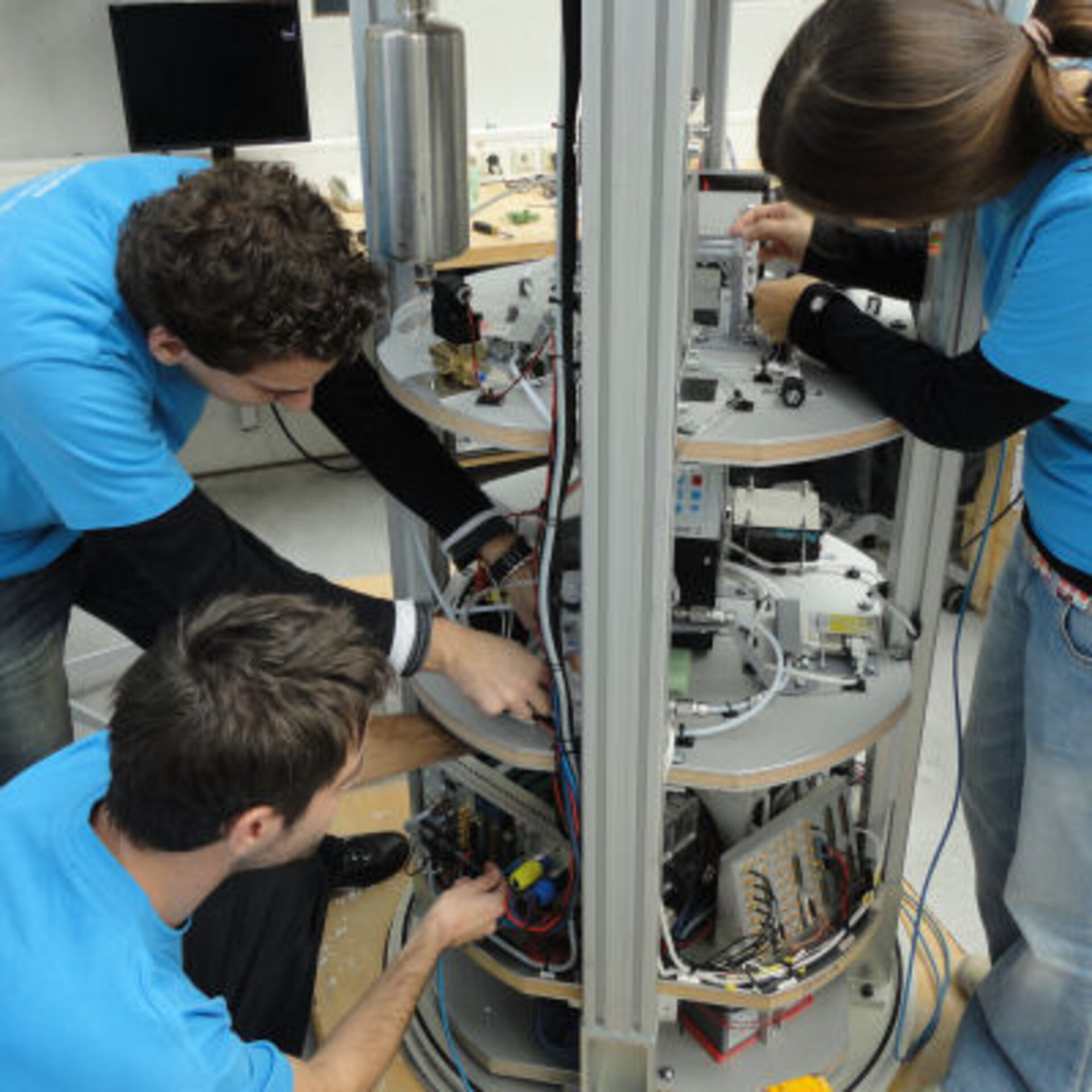 The second ESA 'Drop Your Thesis!' campaign has recently been completed at the ZARM microgravity facility in Bremen, Germany.

The three-week campaign began on 11 October, when a team of three students from the Polytechnic University of Catalonia, Spain, arrived in Bremen to begin preparation of their experiment: Bubble Jet Impingement in Microgravity Conditions.

Over the next two weeks, the BubJet team of Francesc Suñol, Oscar Maldonado and Anna García carefully integrated all of their equipment into the drop capsule and carried out ground tests, supported by representatives of ESA’s Education Office and ZARM engineers.

The BubJet experiment was designed to study the impingement of two bubble jets in microgravity and the effect of modifying the separation distance between these jets. In normal gravity, bubbles rise due to buoyancy force. In microgravity, however, the jets collide in the central zone of the tank, resulting in a high number of collisions which lead to bouncing bubbles and coalescence events.

The results of this experiment will help to improve the general understanding of two-phase flows in a low gravity environment, in particular the bubble generation process, bubble-bubble interactions and the jet collision phenomenon. This will have many engineering and industrial applications in areas such as propulsion, refrigeration and oxygenation, as well as heat- and mass-transfer devices.

During the 'Drop Your Thesis!' campaign, the team conducted five drop sequences with different distances between the jets and gas, and different liquid flow rates. Over the coming weeks and months they will analyse the mass of data as part of their university research.

The BubJet team expressed their gratitude to the engineers and technicians at ZARM, whose great experience and assistance ensured the success of the series of drops. They also said how much they had enjoyed and benefited from working in one of Europe’s top microgravity research facilities.

The 146m high drop tower is the main facility of The Center of Applied Space Technology and Microgravity (ZARM) in Bremen. The microgravity experiment time in the tower can be extended to 9.3 seconds by performing a vertical parabolic flight instead of a simple drop experiment.

The 'Drop Your Thesis!' programme provides selected university students with the opportunity to develop a microgravity experiment that can be carried out during a series of drops, as part of their research programme or Masters / PhD thesis. It is one of a series of hands-on research opportunities offered to students by ESA's Education Office.

ESA is currently inviting student teams to send in proposals for the 2011 'Drop Your Thesis!' campaign, which will take place in Bremen for three weeks during the autumn of 2011. Interested teams from ESA Member States should register on the ESA Education Office's project portal and upload their completed application by 21 February 2011. Proposals from ESA’s Cooperating States are also encouraged.

The team selected to participate in the 2011 'Drop Your Thesis!' programme will be supported by ESA’s Education Office, ZARM engineers and members of the European Low Gravity Research Association (ELGRA). ESA will offer financial support to cover part of the cost of building the experiment and to cover the costs of team travel and accommodation associated with the campaign.