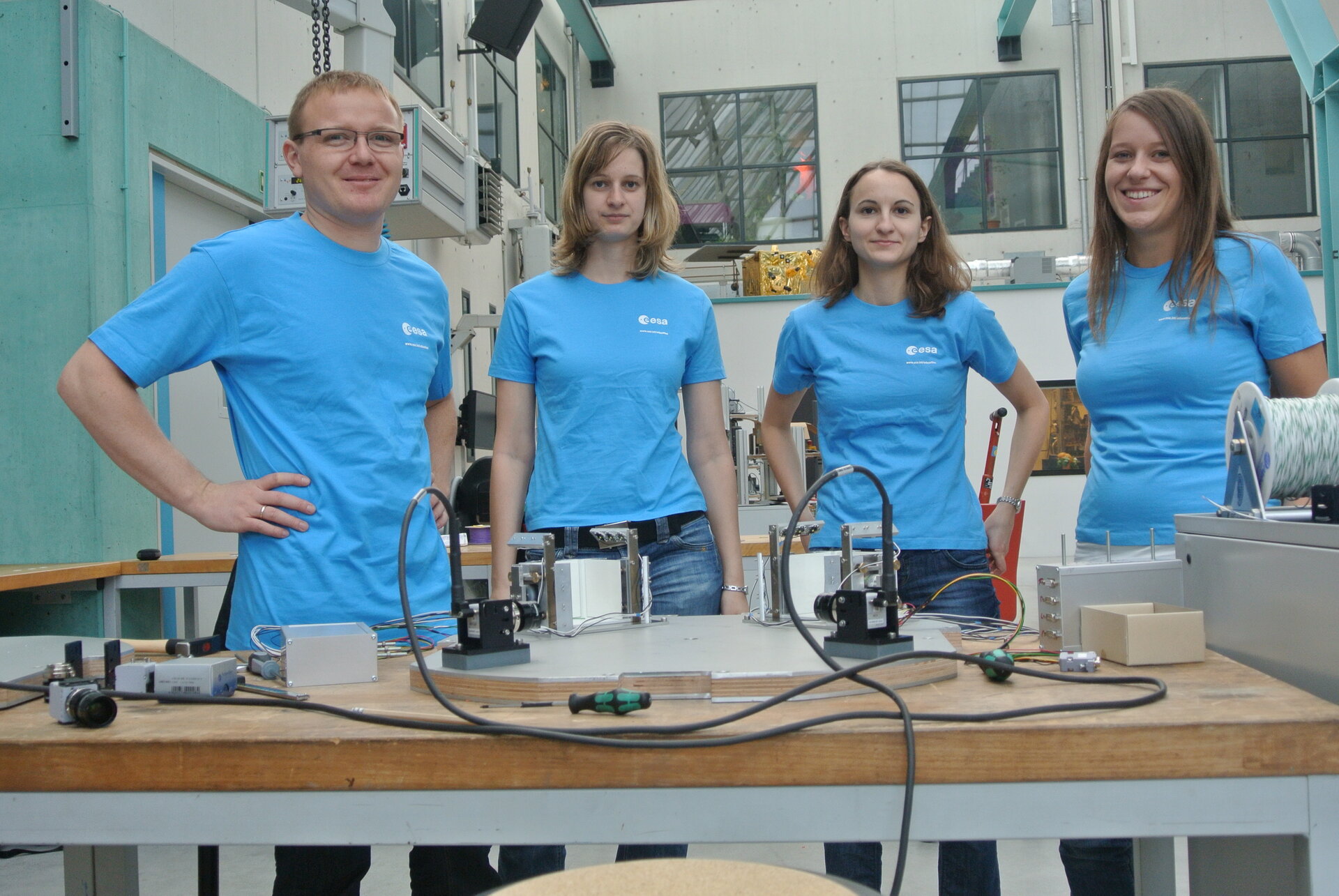 Our understanding of sandstorms, avalanches and even the rings of Saturn should receive a boost thanks to ESA’s 2012 Drop Your Thesis! programme. By repeatedly dropping a container of small rods, students have collected unprecedented observations of the way ‘granular gases’ behave.

Granular gases are agitated collections of grains that are found in a variety of physical environments, from sandstorms to avalanches, from the asteroid belt to the rings of Saturn. Yet at present, their behaviour is poorly understood.

ESA’s Drop Your Thesis! Programme uses the 146-metre-tall drop tower operated by the ZARM Centre of Applied Space Technology and Microgravity in Bremen, Germany. This year’s project is the GAGa DropT experiment. The team is composed of three PhD students studying at Otto-von-Guericke University Magdeburg (Germany).

GAGa DropT’s experiment comprises three cubic containers whose walls can be shaken as they fall to agitate a collection of rods. To date, granular gases have usually been studied only in computer simulations, using spherical grains. In building their experiment, the students wanted to study cylindrical grains, so placed rods into the chamber. To agitate the rods, the experiment was equipped with actuators similar to those found in audio speakers.

The campaign lasted for two weeks. During the first week, the students tested their equipment and then mounted it inside a test capsule that would be placed inside the tower. ‘ The support from the ZARM engineers was great, from the integration to the experiments,’ says team member Kirsten Harth.

On the Monday of the second week, the first launch took place. Catapulted upwards in the tower, the experiment rose and then fell, providing 9.3 seconds of virtual weightlessness known as microgravity. During this time the team videoed the behaviour of the grains in the containers for later analysis.

Reviewing the data that afternoon, they made some adjustments to the experiments as some of the rods were becoming stuck on the walls. Throughout the rest of the week, the experiment was run every morning, with data review and apparatus tweaks to improve the experiment even further.

The data collected this week will now allow the team to analyse the movement and distribution of the rods in a three-dimensional volume, rather than the two-dimensional space usually used in simulations.

‘It was great to have the opportunity to perform microgravity experiments here. I learned a lot about constructing a setup and controlling it with a microcontroller. I also really enjoyed the time here at the drop tower taking part in the experiments. The results of the experiments will help me to learn more about granular gases,’ says team member Kathrin May.

And that, in turn, will allow better understanding of natural events involving granular gases.

Drop Your Thesis! 2013 will take place next year. Proposals by university students can be submitted until the 11 February 2013 deadline. Details can be found here.