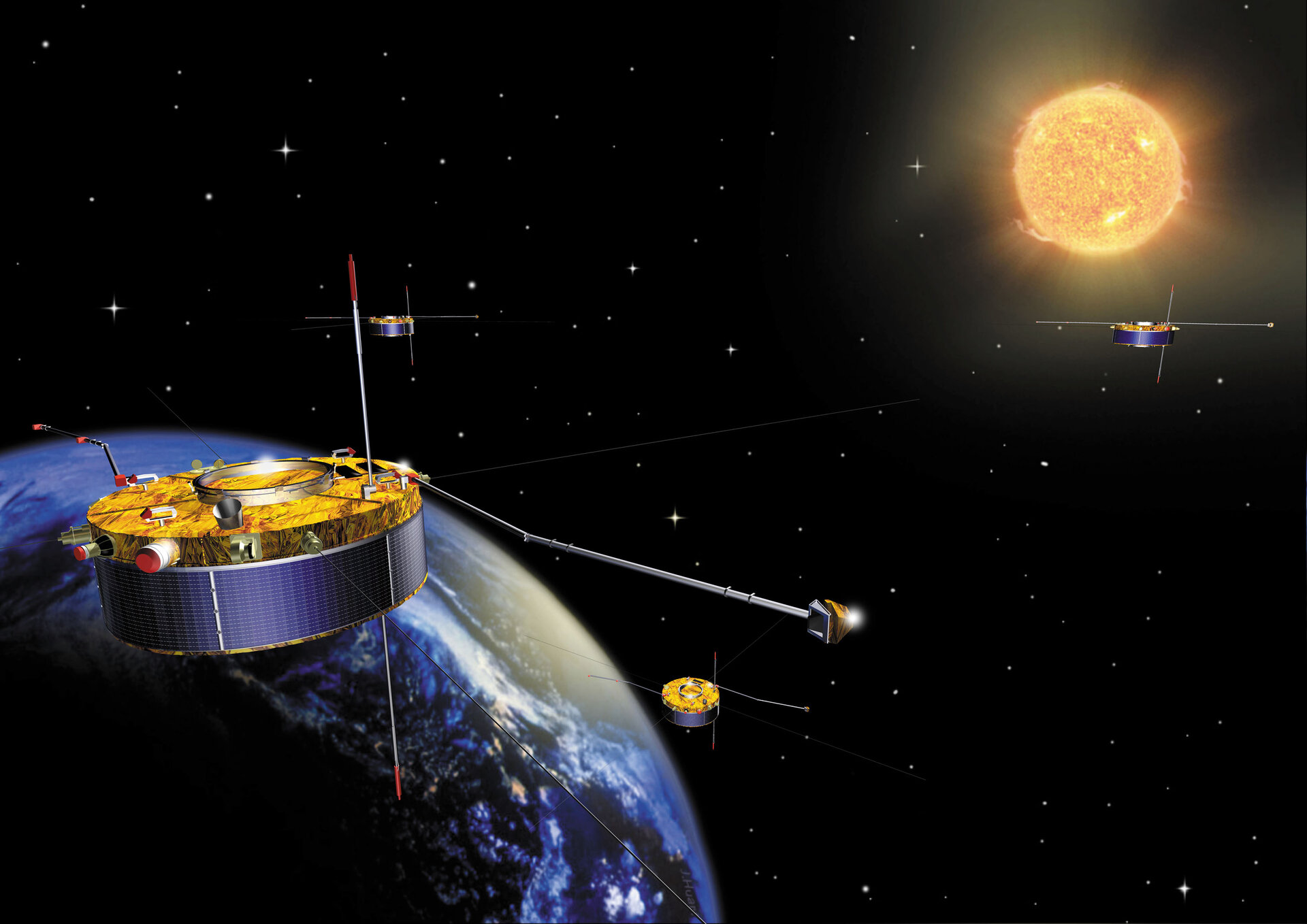 On 15 September, flight controllers at ESA's Space Operations Centre watched tensely as 'Rumba', No. 1 in the four-spacecraft Cluster fleet, was switched into a low-power, deep hibernation mode. The aim was to survive a challenging eclipse.

Each year, in autumn, the Cluster fleet must pass several times through the Earth's shadow with respect to the Sun. During these eclipses, which last about three hours, sunlight is blocked by the Earth and the spacecraft solar panels cannot generate electricity.

Batteries then generate electrical power, which is used to run heaters - keeping the spacecraft warm - and to operate on-board computers and maintain spacecraft control.

However, the Cluster fleet, launched in mid-2000, has been in orbit for over six years and batteries, in particular, are beginning to age. This year, spacecraft No. 1, Rumba, had the most severe battery problems; three out of five have already been declared non-operational for nominal use and one has a high leakage current.

As a result, mission engineers forecast that only about half of the battery power required by Rumba would be available during eclipse season.

The pending power shortfall was recognized in 2005, and an interdisciplinary team of engineers comprising representatives from the Flight Control Team at the European Space Operations Centre (ESOC), scientists at ESA's Research and Technology Centre (ESTEC) and the spacecraft's builder was established to devise a solution.

The team created a computer model of the spacecraft's thermal behaviour to identify how, exactly, it could survive eclipses with reduced, or even with no, active heaters. There were also issues with the on-board computer, designed to restart itself automatically in the event that power is ever lost.

"The most difficult aspect was to find a safe method to switch off the onboard computer, deactivating its auto-recovery function and then to be able to wake it up again from its 'artificial coma' after the eclipse," said Juergen Volpp, Spacecraft Operations Manager at ESOC, in Darmstadt, Germany.

A solution was finally found by reducing on-board power usage to just a trickle knowing that the three-hour eclipses wouldn't be long enough for the spacecraft to totally freeze up. Rumba would, in effect, be put into deep hibernation.

But to solve the tricky computer problem, engineers hit upon the idea of maintaining power during the eclipses only to the decoder, which maintains the spacecraft's 'listening' function, or its ability to understand commands. This component needs only a trickle of current and would be essential to command the computer to restart once the eclipse was over.

However, there was no way to fully validate this unique 'decoder-only' hibernation mode from the ground.

Thus, on the night of 15/16 September, spacecraft controllers huddled tensely in the mission's Dedicated Control Room at ESOC for the first live implementation of 'decoder-only' mode. Almost everything onboard Rumba was completely shut down, with power fed only to the decoder so as to receive the wake-up signal.

Tension in the Cluster control room was palpable

Once the command was sent, Rumba powered itself down and then entered the eclipse zone while engineers began a long, two-and-one-half hours of silent waiting. Tension in the Cluster control room was palpable.

When the predicted eclipse passage ended at 22:13 UTC (00:13 CEST), engineers sent commands to wake the on-board computer. They had to wait one minute for the computer to restart itself, plus four seconds of telemetry processing and signal travel time. "We never thought that sixty-four seconds could seem so long," said Volpp.

But the meticulous preparations and months of planning paid off handsomely as Rumba emerged from the shadow, grabbed the wake-up signal and powered up its computer just as expected; controllers quickly verified that nothing onboard had cooled below acceptance temperatures, and all systems were back in operation a few hours later.

The strategy was again proven two days later during the next - and longest - eclipse, early on 18 September. The last eclipse was successfully negotiated on 20 September and the Cluster fleet is now back in nominal operation, continuing one of ESA's most successful astrophysics missions.