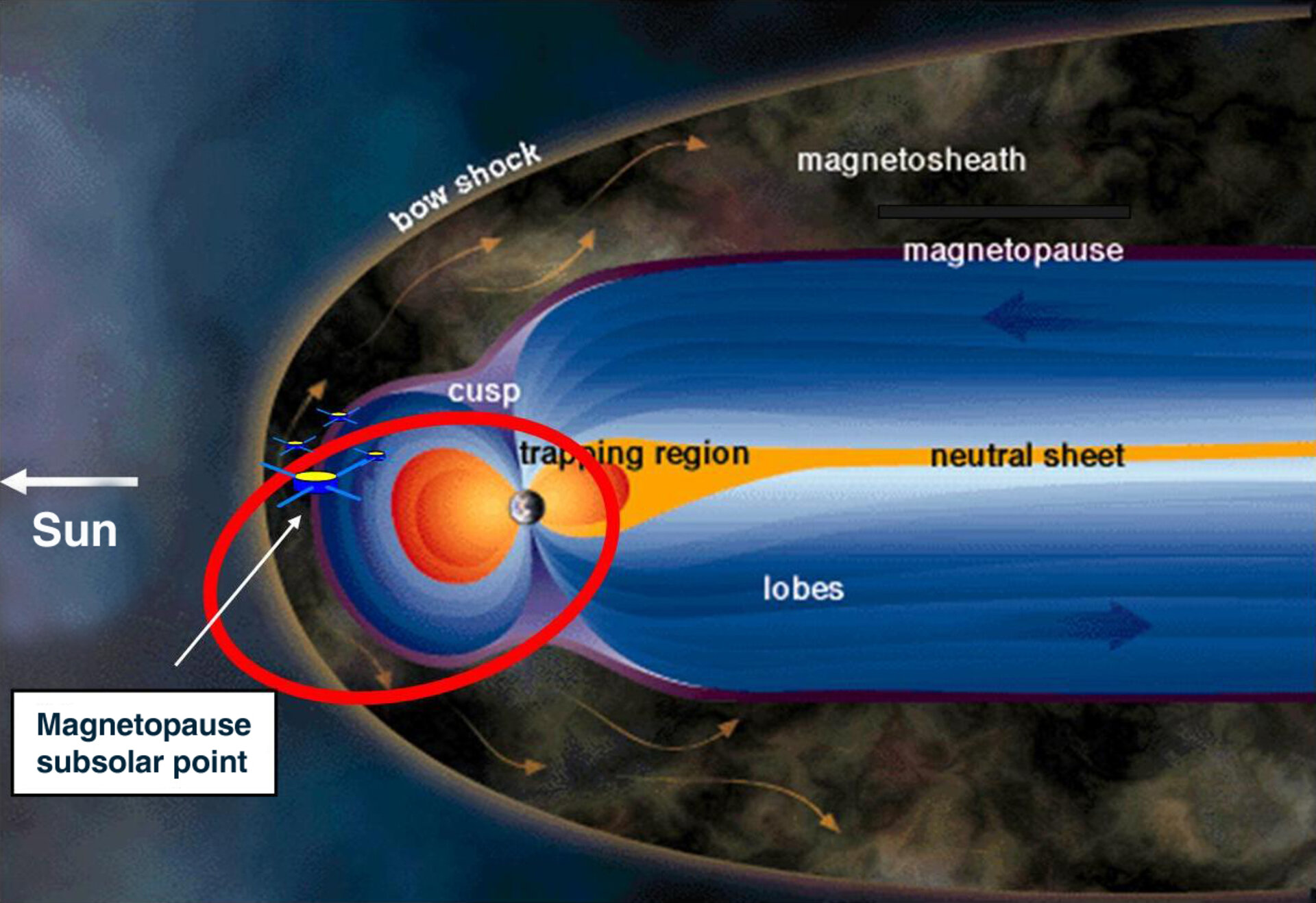 ESA’s Cluster satellites have flown through regions of the Earth’s magnetic field that accelerate electrons to approximately one hundredth the speed of light. The observations present Cluster scientists with their first detection of these events and give them a look at the details of a universal process known as magnetic reconnection.

On 25 January 2005, the four Cluster spacecraft found themselves in the right place at the right time: a region of space known as an electron diffusion region. It is a boundary just a few kilometres thick that occurs at an altitude of approximately 60 000 kilometres above the Earth’s surface. It marks the frontier between the Earth’s magnetic field and that of the Sun. The Sun’s magnetic field is carried to the Earth by a wind of electrically charged particles, known as the solar wind.

An electron diffusion region is like an electrical switch. When it is flipped, it uses energy stored in the Sun’s and Earth’s magnetic fields to heat the electrically charged particles in its vicinity to large speeds. In this way, it initiates a process that can result in the creation of the aurora on Earth, where fast-moving charged particles collide with atmospheric atoms and make them glow.

There is also a more sinister side to the electron diffusion regions. The accelerated particles can damage satellites by colliding with them and causing electrical charges to build up. These short circuit and destroy sensitive equipment.

Nineteen times in one hour, the Cluster quartet found themselves engulfed in an electron diffusion region. This was because the solar wind was buffeting the boundary layer, causing it to move back and forth. Each crossing of the electron diffusion region lasted just 10-20 milliseconds for each spacecraft and yet a unique instrument, known as the Electron Drift Instrument (EDI), was fast enough to measure the accelerated electrons.

The observation is important because it provides the most complete measurements yet of an electron diffusion region. “Not even the best computers in the world can simulate electron diffusion regions; they just don’t have the computing power to do it,” says Forrest Mozer, University of California, Berkeley, who led the investigation of the Cluster data.

The data will provide invaluable insights into the process of magnetic reconnection. The phenomenon occurs throughout the Universe on many different scales, anywhere there are tangled magnetic fields. In these complex situations, the magnetic fields occasionally collapse into more stable configurations. This is the reconnection and releases energy through electron diffusion regions. On the Sun, magnetic reconnection drives the solar flares that occasionally release enormous amounts of energy above sunspots.

This work may also have an important bearing on solving energy needs on Earth. Nuclear physicists trying to build fusion generators attempt to create stable magnetic fields in their reactors but are plagued by reconnection events that ruin their configurations. If the process of reconnection can be understood, perhaps ways of preventing it in nuclear reactors will become clear.

However, that still lies in the future. “We need to do a lot more science before we fully understand reconnection,” says Mozer, whose aim is now to understand which solar wind conditions trigger the reconnection events and their associated electron diffusion regions seen by Cluster.