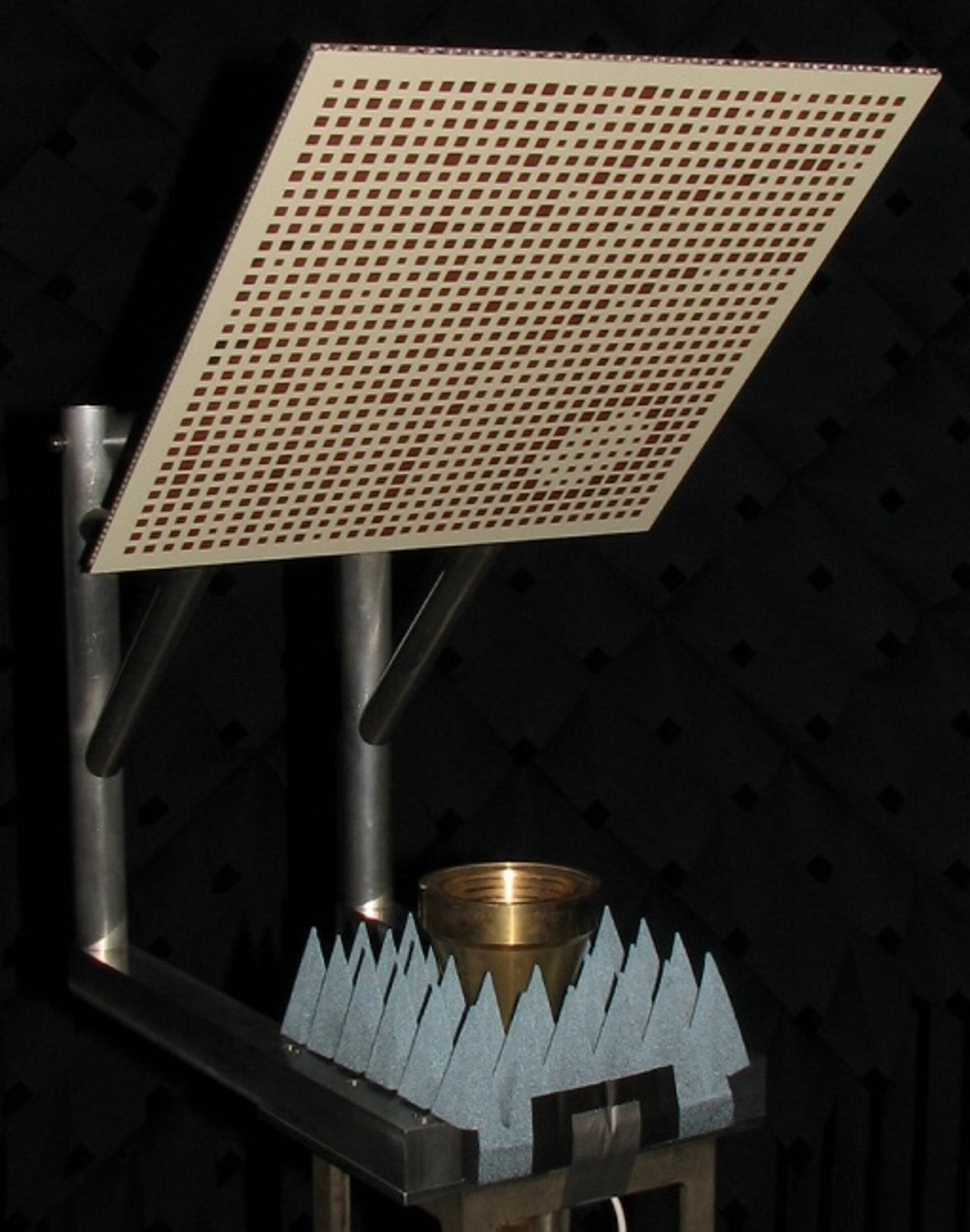 The traditional curved antenna reflector is instantly recognisable on a satellite, but also represents one of the bulkiest elements aboard. As an alternative, new ESA-backed software allows antenna designers to achieve comparable radio frequency performance from flatter, smarter ‘reflectarrays’, which can be manufactured cheaply, just like printed circuits. Two forthcoming ESA missions will demonstrate reflectarray antennas, one in Earth orbit and the other into deep space.

Curved antenna reflectors work like the reflective backing around flashlight bulbs, to shape and direct radio energy as desired. In some cases highly complex curvature is designed to achieve particular tasks – for instance telecommunication satellite reflectors might have curvature to avoid broadcasting to one nation state in favour of focusing signals on another.

With reflectarrays the radio frequency signal is reflected along surface printed elements above a metallic ground plane in such a way that a three-dimensional field is created, comparable to that created through a standard reflector.

“By flattening antennas in this way, missions can gain in terms of mass and volume, as well as onboard accommodation,” explains ESA antenna engineer Giovanni Toso. “And the cost is also reduced, because producing a specifically-shaped reflector is an expensive business, involving a specially-created moulding with follow-up precision shaping to be performed.

“What we do with reflectarrays is move this complexity from the manufacturing to design phase. While producing these flat or flatter surfaces with metallic elements printed on dielectric slabs is comparatively cheap, designing their layout to produce the desired radio frequency characteristics is really challenging mathematically – which is where this new software comes in.”

Antenna specialist TICRA in Denmark is now marketing dedicated software for designing reflectarrays, building on past ESA R&D projects with the company.

“Reflectarrays can be built either flat, or with a degree of curvature, this additional degree of freedom offering potentially the best of both worlds,” notes Giovanni.

“TICRA’s software can accommodate both options, as well as screens working not only in reflection but also in transmission mode. And in principle it can be used across a very wide spectral domain, its versatility extending even into optical bands.”

TICRA Chief Technology Officer Erik Jørgensen adds: “The new software has proven to be the missing link needed by antenna designers to take their advanced antenna concepts from the idea level and turn them into actual new technology developments with superior performance. And the contribution from ESA’s experts have been instrumental for reaching this milestone.”

First reflectarray flights on the way

Europe’s first reflectarray will be flown in space in 2022, aboard the GomX-5 nanosatellite, the latest in the series of ESA’s technology demonstrating CubeSats. Developed through a consortium led by Denmark’s GomSpace, the 12-unit CubeSat will include a triple-panel reflectarray that will unfurl in orbit to become a single large antenna, to communicate with the ground.

A follow-up reflectarray mission will follow a year or two later depending on launch opportunities, in the shape of ESA’s M-Argo – Miniaturised Asteroid Remote Geophysical Observer – which will cross deep space to survey a near-Earth orbit asteroid. M-Argo will incorporate a triple panel reflectrarray as its high gain antenna, to return copious science data back to Earth.