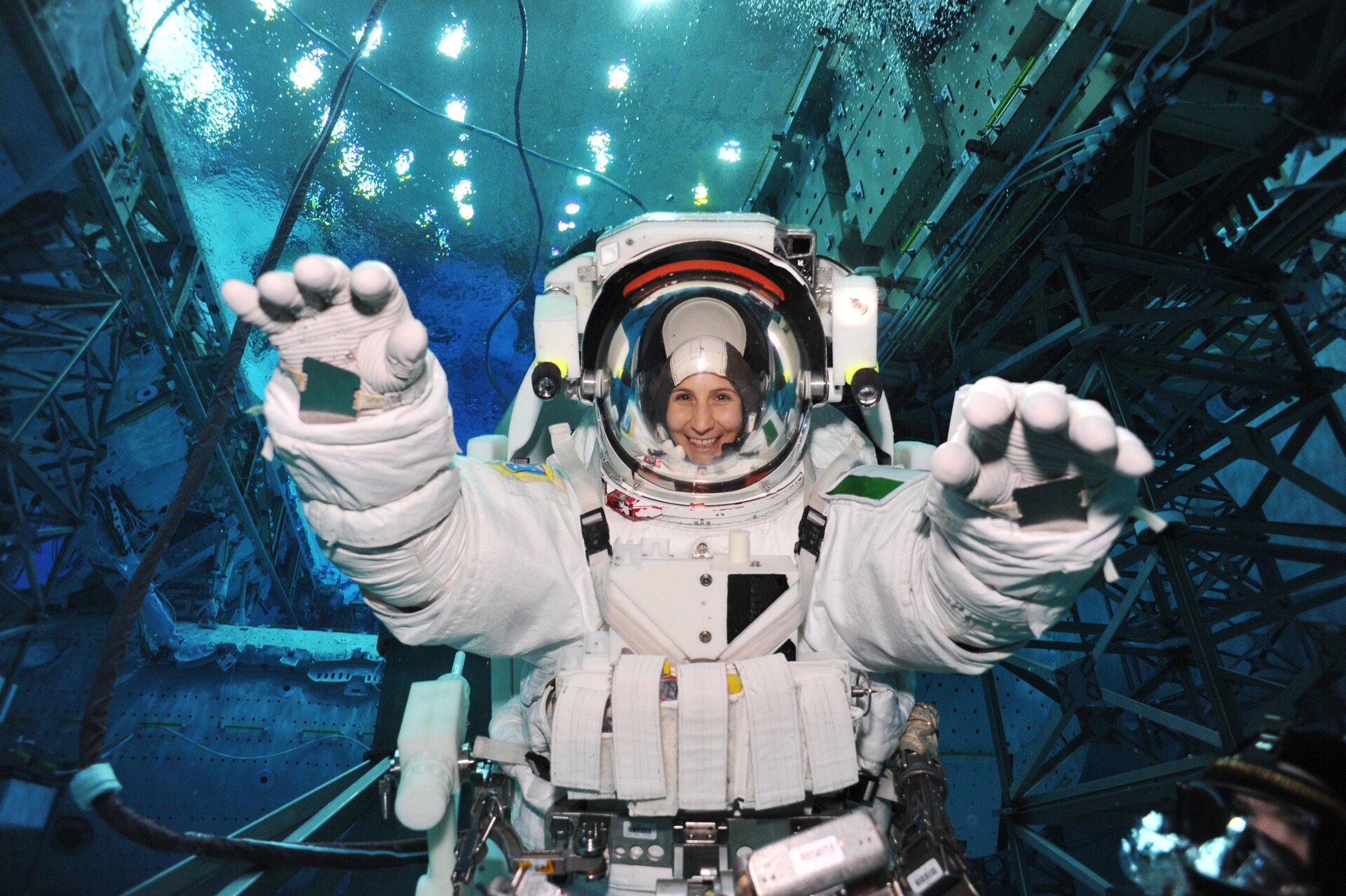 Born 26 April 1977 in Milan, Italy, Samantha Cristoforetti is an avid reader with a passion for science and technology, and an equal interest in humanities. She enjoys learning foreign languages and occasionally finds the time to hike, scuba dive or practice yoga.

Samantha completed her secondary education at the Liceo Scientifico in Trento, Italy, in 1996 after having spent one year as an exchange student in the USA.

In 2001, she graduated from the Technical University of Munich, Germany, with a master’s degree in mechanical engineering with specialisations in aerospace propulsion and lightweight structures. As part of her studies, she spent four months at the Ecole Nationale Supérieure de l’Aéronautique et de l’Espace in Toulouse, France, working on an experimental project in aerodynamics. She wrote her master’s thesis in solid rocket propellants during a 10-month research stay at the Mendeleev University of Chemical Technologies in Moscow, Russia.

As part of her training at the Italian Air Force Academy, Samantha also completed a bachelor’s degree in aeronautical sciences at the University of Naples Federico II, Italy, in 2005.

In 2001, Samantha joined the Italian Air Force. She was admitted to the Air Force Academy as an officer candidate, and served as class leader for four years. Following her graduation in 2005, she attended the Euro-NATO Joint Jet Pilot Training program at Sheppard Air Force Base in the United States, where she earned her fighter pilot wings in 2006. Upon her return to Italy, she was assigned to fly the AM-X ground attack fighter at the 51st Bomber Wing in Istrana.

Samantha was selected as an ESA astronaut in May 2009. She joined ESA in September 2009, and completed her basic astronaut training in November 2010. She was then assigned to the role of ESA reserve astronaut, which allowed her to earn her initial qualifications in EVA and robotics, as well as certification as flight engineer of the Russian spacecraft Soyuz. In March 2012, she was assigned to fly as flight engineer on the Soyuz TMA-15M as part of the crew of Expedition 42/43 to the International Space Station.

On 23 November 2014, Samantha was launched from the cosmodrome of Baikonur in Kazakhstan. She returned to Earth on 11 June 2015, after spending 200 days in space. The mission, which was given the name Futura, was the second long-duration flight opportunity for the Italian Space Agency, and the eighth for an ESA astronaut.

After completing her post-flight tasks, Samantha was given technical and management duties at the European Astronaut Centre, which included serving on technical evaluation boards for exploration-related projects. For several years she led the Spaceship EAC initiative, a student-centred team working on the technological challenges of future missions to the Moon. She then served for two years as crew representative for ESA in the Gateway project to establish a staging post around the Moon, providing expertise on crew systems and habitability aspects for the ESA-provided I-Hab module.

Samantha was also part of a working group tasked with liaising with Chinese counterparts to define and implement cooperation in the field of astronaut operations. In 2017, together with fellow ESA astronaut Matthias Maurer, she took part in a sea survival exercise organised by the Astronaut Center of China in the Yellow Sea. This was the first joint training of Chinese and non-Chinese astronauts in China.

In 2019, Samantha served as commander for NASA’s 23rd Extreme Environment Mission Operations (NEEMO23) mission during a 10-day stay in the world’s only undersea research station, Aquarius.

In July 2015 Samantha was awarded the Knight Grand Cross of the Order of Merit of the Italian Republic by the Italian president. She holds honorary degrees from the University of Pavia, Politecnico di Torino and Vrije Universitaet Amsterdam.

Samantha is a UNICEF ambassador and donates to UNICEF the proceeds from sales of her memoir Diary of an Apprentice Astronaut, in which she shares her experience of being selected as an astronaut and then training for and flying her first space mission.

Samantha returned to the International Space Station for her second mission, Minerva, on 27 April 2022. She was launched in a new SpaceX Crew Dragon capsule named Freedom alongside her Crew-4 crew mates, NASA astronauts Bob "Farmer" Hines, Kjell Lindgren and Jessica "Watty" Watkins. For both the flights to and from the Station, Samantha is a mission specialist. On Station, she is USOS Lead, responsible for all activities within the US Orbital Segment for the duration of her mission. This segment includes the US, European, Japanese and Canadian modules and components of the Space Station. During her time on board, Samantha will support numerous European and international experiments in orbit.

Learn more about Samantha’s Minerva mission in this brochure.

When not travelling for work, Samantha lives with her partner Lionel and their two children, Kelsi Amel and Dorian Lev, near ESA’s Astronaut Centre in Cologne, Germany.